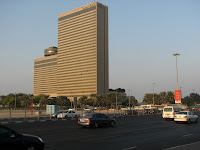 g. Places visited were the Gold Souk & Carrefour a large supermarket chain. Souk is an Arabic term for market. Lunch was arranged at Al Ibrahimi Palace Restaurant near the New Burjuman Centre,Karama. Food served there was Indian & extremely delicious. The ambience was nice & friendly. It is reported to be owned by a Pathan - the door keeper was 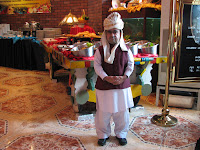 a tiny Pathan about 3' tall & he is a unique attraction here. Next part of the tour was a visit to the wild wadi water park. As Shobha & I were not keen on water sports we decided to give it the skip and instead decided to explore old Dubai a bit on our own. (Log on to below website if you want to know more about Wild Wadi. http://en.wikipedia.org/wiki/Wild_Wadi_Water_Park)
We decided to take a walk down down Al Khaleej St. behind the Hyatt then into Al Khor St. We walk past gold shops of Indian origin like Joy Alukkas, Atlas & Chemmanoor and finally turn left into 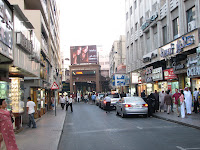 the Dubai Souks.
Dubai Souks are a striking contrast to the modern shopping malls. Shopping in Dubai is not complete without a browse through Dubai's famous souks. Souks swarm with people busy negotiating with the shopkeepers in traditional style of doing business. Dubai souks are located at D 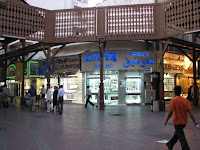 eira near the old docks and sell gold jewellery, traditional spices, perfumes and antiques.
We first walk through the Gold Souk which has a large number of shops exhibiting a dazzling array of gold ornaments - earrings, rings, necklaces, chains, bracelets, bangles and pendants. It is reported that any given time over 25 tons of gold jewellery is on display at the souk. It is an awesome display. We were tempted to buy but strongly resisted.
Next we entered the Spice Souk where fresh Arabic spices are on display - cloves, cardamom, frank 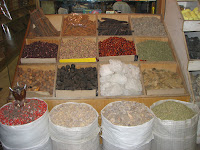 incese, cinnamon, incense, dried fruit and nuts imported from all over the Middle East. The spices are sold straight out of large open sacks. We bought Irani dates,saffron,dalchini & frankincese(dhoop). We did some aggressive bargaining and could drive down quoted prices by half !
We exited the souk into Baniyas Road and boarded the Dhow (ancient Arabic Boat) at gold souk station and took a ride to Bur Dubai - it was dusk and light was fading. The fare was Dhm.1 per head and we were across in 5 mts. The boatman Husain was a friendly chap from Bangladesh. He advised us not to visit the old palace and museum as " it is just an old building & there is nothing there". We heeded his advice. 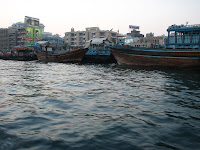 We disembarked at Bur Dubai station where the impressive Bank of Baroda skyscraper greeted us. We walked a bit through Mina Bazaar which displayed textiles & visited some electronic shops to check out I-Pods, Handycams & cordless phones. The weather was nice and a cool breeze was blowing. We had good South Indian coffee at Saravana Bhavan & then took another dhow back. By now it was dark and Bur Dubai looked enchanting & attractive in the night lights. We got off again at gold souk station took the pedestrian underpass under Baniyas 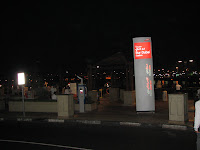 Rd. and crossed into Old Baladiya St. adjacent to the gold souk.
We then went to Al Soor St where the Perfumes Souk is located - these shops sell only perfumes . You can find scores of shops 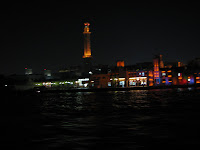 selling a variety of perfumes with a thousand aromas ranging from traditional Arabic Ittars which are strong & spicy to the latest designer brands with light floral aromas. We did end up buying some perfumes and got some good bargains.
We finally call it a day and trek back to the 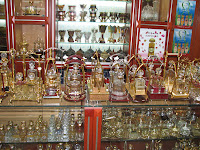 Hotel.
Back to the room for hot bath and change of clothing we report to the ballroom at the lobby for dinner. It appeared that the groups that went on the Wild Wadi trip had had an exciting experience too and were animatedly sharing the details.
at November 25, 2007 6 comments:

18-21 November'07 :
Mico & Bosch organised their Annual Distributors conference this year at Dubai - the first time this is being held at a foreign locale. Invitations were extended to select Distributors and their spouses. Participants from South & East converged at Chennai & departed by Thai Airways on 18th afternoon at 2.30 pm. Simultaneously other groups flew out from Bangalore & Mumbai. Flying at ground speed of 460 mph and an altitude of 38000 ft we reached Dubai at 6.00 pm local time after a journey spanning 3 hours 30 mts. Enroute we flew over the Deccan plateau, Arabian sea, city of Muscat & Gulf of Oman before taxiing down at Dubai. Pretty and pleasant faced stewardesses dressed in traditional Thai costumes provided excellent service - cold towels & refreshments followed by leisurely Asian Vegetaria 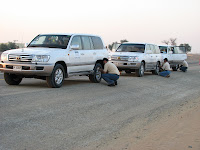 n lunch accompanied by variety of wines & soft drinks.
Passport control at Dubai was slow and after an exasperatingly long wait, we collected our baggage and wheeled out of Dubai airport to be swiftly whisked away in air conditioned deluxe coaches to the Hyatt Regency Hotel located at Deira. The friendly hotel staff offered us welcome drinks on arrival, collected our passports for safe keeping & handed over the room keys & escorted us to our fabulous rooms. After a quick shower & change of dress we gathered at 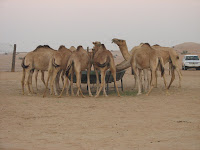 the poolside at 8.00 pm for cocktails, awards, entertainment, fellowship & dinner. Silver Plaques were presented to distributors who had Business Association of more than 50 years with Mico - Stanes Motor Parts being t 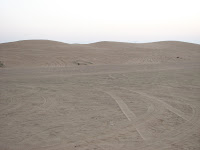 he oldest Associate I had the singular honour of being the first to go on stage to receive this Award. Post dinner we collected our regulation Bosch shirts,T-shirts & carry bag.
Breakfast on 19th was at the "Foccasia" on the first floor - an attractive spread of corn flakes,milk, honey, toast, marmalades, preserves, a range of omelettes (plain,cheese & masala), fruits, juices, dough nuts, croissants,tarts,cakes 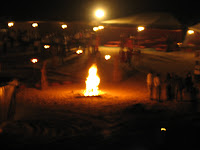 ,idlis, dosas, chutney & sambhar,coffee & tea. The Foccasia provided a nice view of the Corniche & Dubai creek where a lot of land reclamation is on presently.
The conference was held at the Grand Hyatt Convention Centre about 30 mts drive from Hyatt Regency. While the men (and some women) were deliberating business (more awards, accolades & applause awaited Stanes Motor Parts) the 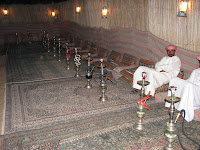 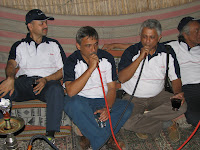 een arranged to transport us and at the wheels were expertly trained & specially licensed drivers. 30 minutes into the drive the convoy stopped by the road side and the tyres were d 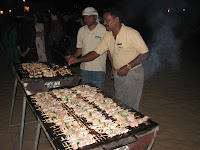 eflated to facilitate dune driving. Then we went off road, 4w drives were engaged and the safari went "dune bashing"- riding up and down the treacherous dunes, negotiating steep turns & cruising precariously at sharp,almost impossible angles.
As the sun descended into the horizon, we stopped at a camel watering hole to take sunset photographs, while standing on top of the fading desert dunes. It is already dark when we finally reached the camp site which was illumined by a blazing bonfire and multiple hurricane & wick lamps . Camels awaited us at the entry point and offerred rides in the dark.It was a typical no 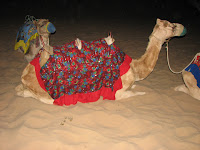 madic camp with traditional Bedouin tents with low cushions to squat & relax. A thick rectangular carpet at the centre of the camp was available for those who wanted to sit under the open sky. Ladies got their hands decorated with Henna & men smoked the sheeshas or hubbly bubbly water pipes. Liquor & soft drinks flowed freely and vegetarian falafal rolls & barbequed meat were served endlessly. The grand finale of the evening were the two enchanting belly dancers who arrived attired in diaphanous silks & riding camels - a ravishing Russian & a buxom Egyptian . They seductively swayed their hips to captivating Arabic music and encouraged spectators to join in. Many hopped on to the floor to fun,frolic & gyrate. Yours truly,tightly encumbered with a lumbar belt, preferred to remain on the side in cushioned comfort to watch & enjoy the proceedings .
at November 24, 2007 2 comments: