Kallanai : After Koviladi we returned & reached the Kallanai, an ancient dam built by Karikala Cholan in the 1 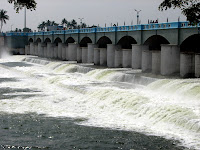 st Century AD, on the Cauvery in the state of Tamilnadu. The dam on the border between Tiruchirappalli and Thanjavur constructed by him is a superb work of engineering. Built with earth and stone it has stood the vagaries of nature for hundreds of years. In 19th century, it was renovated and the name of the historical dam has since been changed to “Grand Anicut”. It stands as the head of great irrigation system in the Thanjavur district. After Grand Anicut, the Cauvery divides into numerous branches and cover the whole of the delta with a vast network of irrigation channels and gets lost in the wide expanse of paddy fields. The mighty Cau 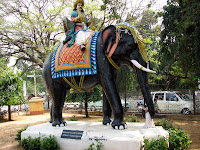 very river here is reduced to an insignificant channel and falls into the Bay of Bengal at the historical place of Poompuhar. For detailed informstion log onto : http://en.wikipedia.org/wiki/Kaveri_River
The Kallanai serves as an excellent picnic spot & offers a very scenic view of the reservoir, the dam & the branching off of the rivers & canals downstream.
Tiruve 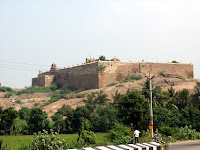 rumbur : after relaxing at Kallanai we headed for Tiruverumbur - another of the Tevara sthalas in chozhanadu -the temple, is located about 15 km east of Trichy. Dedicated to Lord Shiva, the temple enshrines Erumbeeswarar or Madhuvaneswararas the presiding deity along with his consort Saurabhya Kudalaambal or Madhuvaneswari. Appar has sung praises of this temple. This Shivastalam is a hill temple with a flight of granite steps. This temple has 2 prakarams, and the entire temple, and the mandapam at the fo 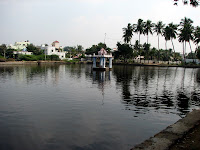 ot of the hill are replete with inscriptions from the Chola and the Pandya period. As per legend, Devas in the form of ants are said to have worshipped here. To facilitate the ants to climb the lingam & offer worship the lord has manifested himself in the form of an anthiill & also tilted to one side. The teppa kulam is at the foot hills - a fascinating tirtham full to the brim with water.
For legends & other information log on to : http://www.shivatemples.com/sofc/sc007.html
Noon : After Tiruverumbur we returned to Trichy for lunch, relaxed for a couple of hours in the room & w 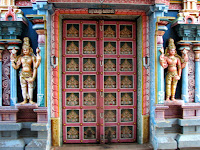 ent back to Srirangam Ranganathaswamy temple for a second time for a more detailed & relaxed visit. The Garudan Sannithi was awesome - it is said to be the biggest Garudan ever existing in any temple. Other sannithis visited - Andal, Venugopalr, Chakrathalwar, Ramar, Pattabhiramar,Ramanujar,Dhanwantari,Vasudevar,Mettu Azhagiya Singar. We also saw the paramapada va 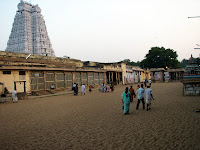 sal or swarga vasal, 1000 kal mandapam, Chandra Pushkarni, Vella Gopuram. There sculptured pillars everywhere & one spend days on end study the skill & beauty of these.
We were fortunate to witness Namperumal,the processional image, being carried on the shoulders of volunteers (to circumambulate the Chitra Veedhi) with the temple elephant Andal leading the procession & followed by a huge crowd of devotees singing praises of perumal.
Next we proceeded to Tiruvanaikaval temple & here too we reached just in time to see the panchamurthies - Jambukeswarar, Akhilandeswari, Muruga,Vinayaga & Sandikeswarar leaving for a procession around the veedhi outside the Vibhuti prakaram. We really felt blessed at such good fortune. After that we had nice long & peaceful darshan of the moolavar (appu lingam) & Ambal. This temple really gives you tremendous vibrations.
at February 03, 2008