Visited on 2 Sep'2011: After Lunch we took some rest and then left Madurai for Thiruppuvanam around 5.00 pm. We first crossed the Theppakulam at Madurai before moving on towards Thiruppuvanam - a Thevara Sthalam as also one of the Pandi Pathinaalu.The four Saivite saints have sung the glory of Poovana Nathar, deity of Tiruppuvanam temple, located 20 km east of Madurai on the road to Manamadurai, on the southern bank of the river Vaigai.
Temple Legend: The place is connected with a legend narrated in the ``Thiruvilaiyadal Puranam." Ponnanaiyall, an ardent devotee of Lord Siva used to take bath in the river early in the morning, offer garlands and dance before the Lord daily. She spent all her earnings and wealth in feeding the devotees of the Lord. To test her, the Lord created in her mind the desire to carve out His idol in gold. Appearing before her as an ascetic (Siddhar) he claimed that He could turn any metal given to Him into gold. Promptly the girl handed over all the vessels in the house. The siddhar smeared holy ash on them and went away telling her that she would find them golden the next morning. So it happened and the girl turned over the collection to a goldsmith to make an idol. And what she saw was so enchanting that she pinched the deity's cheek leaving a permanent mark there. Her statue is found at the entrance of the temple along with those of the Siddhar, Chokkappa Nayak, the king who built many portions of the temple, his queen and his minister. The idol of Somaskandar, which bears the pinch mark on His cheek even now, is known as Ponnanaiyan and Azhagiyapiran. When Saint Gnanasambandar visited this place he was held up on the northern bank of the river. The Lord asked the celestial bull Nandi to stand a little aside to give him darshan. One therefore finds Nandi seated a little aside and not right in front of the sanctum sanctorum. On our return we stopped at a nice roadside Bakery that was selling oven fresh biscuits, cakes and other niceties. We picked up a whole lot of goodies before proceeding further.
Theppakulam - dry but green.Normally a water tank,presently serves as a playground. 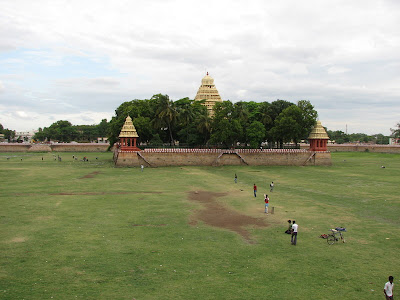 The Entrance Tower to Tirupuvanam Temple 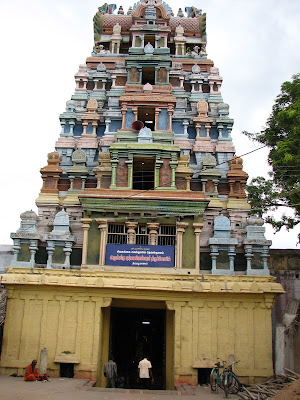 The Lord appearing as Siddhar or Ascetic 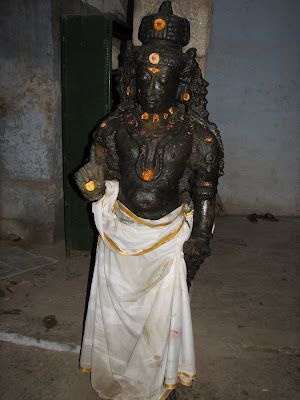 The Nayak King & his Queen paying obeisance to the Lord 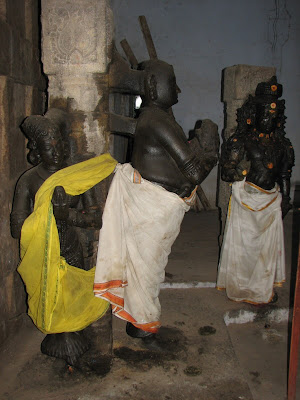 Ponnanaiyall the ardent devotee who had unflinching faith in the Lord 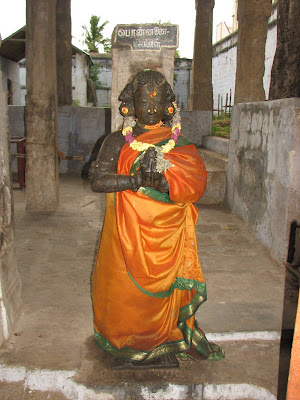 Roadside bakery -sales girl posing in the midst of goodies 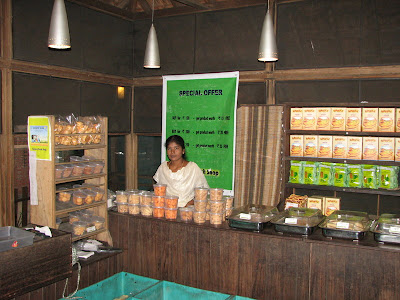 View of Bakery from Highway 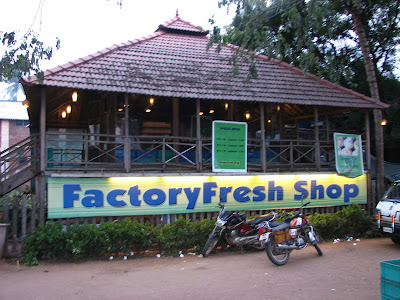