8 March'2008:
Thirukannapuram, near Thirupugalur, which lies between Nagapatinam, Nannilam and Kumbakonam, is one of the 108 Divya Desams The moolavar is Neelamegha Perumal and the utsavar is Savuriraja Perumal.The idol appears in an unusual posture here in this temple. Instead of blessing the devotees, he appears to be in a receiving posture, meaning that he is accepting the sorrows and difficulties of the devotees.
The utsavar is known as Savuriraja Perumal as he appears with ‘savuri’ (hair) on his head. Legend: It was the practice of the The temple priest to present a garland that had adorned the deity, to the Chola king who visited the temple. But the priest had actually given away the garland to a temple dancer.When the king arrived, the priest sent for the garland he had given to the dancer. The king received the garland but noticed a strand of hair in it and became furious. To escape from his wrath, the priest told the king that the Lord had a tuft of hair and that strand of hair was from the tuft. To save the priest, the Lord too appeared with a black ‘savuri’ in front of the king. From that day on, He has been known as ‘Savuriraja Perumal’.
Apart from this, one can see a scar on the utsavar’s right brow. Thirukannapurathu Araiyar was in anguish when the temple walls were demolished by foreigners. In a fit of sorrow, he threw the plate and it struck the idol on the brow and left a scar on the deity.
Thirukannapuram is famous for ‘muniyodharan pongal’. There is a story behind this too. Collecting the tributes and handing it over to the Chola king was the job of Muniyodharar. Once, instead of giving the money to the king, Muniyodharar spent it on some temple work.
This made the king angry and Muniyodharar was imprisoned. The temple dancer was grief stricken and she approached the Lord. The Lord appeared in the king’s dream and ordered him to release Muniyodharar. The king did so. Later, Muniyodhara offered pongal to God and then ate the delicacy.The next day, the temple priests were surprised to see pongal rolling down with ghee on the body of the Lord. From that day, it has become a tradition to offer ‘pongal’ to the lord every night at 9.00 pm.
There is no ‘Swarga Vasal’ for this temple as they say that one can reach ‘Vaikunta’ if they just step on this soil. It is believed that there is a ‘pulling power’ in the sanctum santorum of this temple and even to this day, one can feel and experience this effect.
The devotees offer 'savuri' to the lord when their wishes are fulfilled.
Thaayaar - Kannapuranayagi (Sridevi, Boodevi, Aandaal, Padmini). Theertham - Nithyapushkarini.
Mangalasasanam: Andal, Kulasekarazhwar, Thirumangaiazhwar, Nammazhwar.
We stayed on in the Temple till the 'muniyodara pongal sevai' was complete & we got to eat the divine pongal.
It had been a long day but well spent and many temples visited. We had visited and prayed at an amazing 17 shrines that day and Thirukannapuram was a fitting finale. As per original plan we were to spend the night at Tirukannapuram Temple guest house. But as the rooms were substandard we decided to drive back to Tiruvarur. Fortunately rooms were available at the Circuit House & we checked in tired but with great satisfaction.
at June 08, 2008 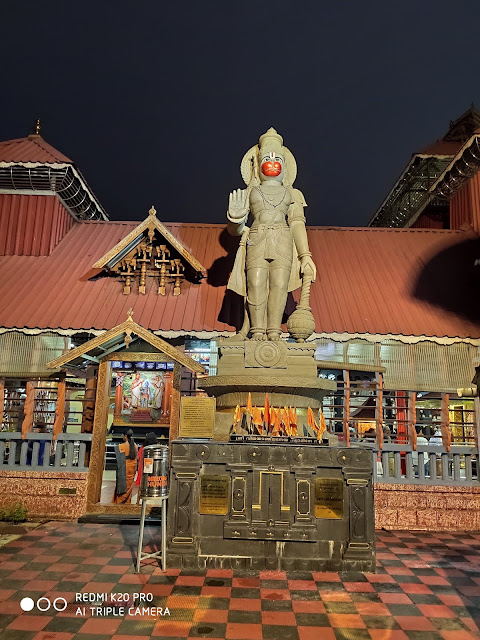