4 May'07 :
I had made a grand plan to visit Ooty & Mudumalai from 2-4 May'07 and accordingly had made advance reservations at Tamizhagam (Ooty) & Log House,Masinagudi. The reservations were obtained with great difficulty as this was peak season in Ooty. In fact for Tamizhagam the special suites were 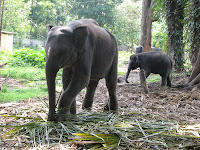 allocated by CM's office(Secretariat,Chennai). However this trip had be cancelled owing to Bhavana & Rohit having to remain in Cbte to establish contact with their respective employers (Market Live & Intel) on some pressing issues by e-mail. After this we decided to make a one day trip some place-the alternatives considered were Top Slip (Anamalais), Munnar orYercaud. But all these were dropped in favour of a trip to Kodanad & then to Ernakulam and a boat cruise in the back waters. 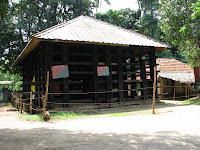 We left Cbte around 5.30 am and stopped over at Aryas Vadakkancherry for breakfast. Then we continued onwards in our journey, turned left at Angamali into Kalady Rd. Just before Perumbavoor we took a left turn via Koovapady (my grandfather hailed from here) passed the Ganapathy Temple and reached the Elephant Kraal at Kodanad.Kodanad, a beautiful and charming semi-rural village situated on the south bank of river Periyar and popular for eco 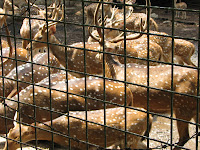 tourism. Kodanad is known for it famous 'Elephant Kraal', the mini zoo and its easy access to the seasonal pilgrimage centre Malayatoor St.Thomas Church,both placed opposite on the beautiful banks of the river Periyar. Kodanad was very famous for elephant capturing and training. Elephant capturing started in Malayatoor reserve forests in 1895 and a Kraal was erected during that time. Newly captured elephants were kept in the kraal till they are sufficiently trained & disciplined to carry out forestry works. The present 6 room kraal was constructed in 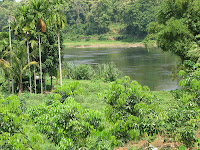 1965. This kraal is now only sparingly used and serves more as a monument of the good old days.
We saw two cute baby elephants in the kraal perhaps a couple of months old. Behind the kraal in a separate enclosure we saw 6 elephants of varying ages. The mini zoo had a good collection of animals like monkeys including a lion tailed macaque, a python, several Brahminy kites,Large groups of Sambhar & spotted deer, peacocks. A group of school children had arrived in a bus and were excitely viewing the animals. I obliged them by taking a photograph of the group and promising to send the same by e mail.
at May 08, 2007