Tiruvidandai is located at a distance of 42 km from Chennai, enroute to Mamallapuram.
Lakshmi V 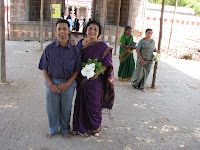 araha Perumaal in a standing posture facing east and the Utsavar is Nityakalyana Perumaal; Taayaar(Goddess) here is Komalavalli or Akilavalli Naachiyaar. The Moolavar Aadi Varaaha Perumaal is portrayed as a 9 feet high image, with his consort on his left thigh; Aadi Seshan and his consort are seen supporting him. The temple faces the east; it is considered to be one of the few Vishnu temples retaining the features of early Chola temples.
The niche images around the sanctum include those of Vinayaka, Achyuta, Satya, Puru 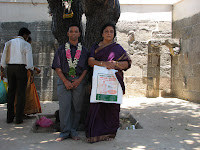 sha and Vishnu Durga. This temple covers a 2.5 acre area. Tirumangai Alwar (8th century AD) has sung of this shrine. The present structure dates back to the 10th and 11th centuries. Inscriptions from Kulottunga Chola I's period (1070-1120) here speak of the existence of the Kalichchingan Mutt, to which endowments were made. Earlier during the period of Vijayendra Chola (early 11th century), gifts were made by the Cholas for the upkeep of the temple. Inscriptions speaking of Raja Raja Cholan's ,contributons are also seen here. The mahamandapam in front of the sanctum has several carved pillars from the 15th century.
The annual Bhramotsavam is celebrated in the month of Chittirai. Other festivals include Vaikuntha Ekadasi in the month of Margazhi; Garuda Sevai is held in the months of Aani, Aadi, Thai and Maasi. The ivory palanquin here is of great workmanship.
Legend has it that a sage by name Galavamuni had 360 daughters, and he offered them in marriage to Vishnu, who appeared in front of him as a Bhrammachari of the Kasyapa gotram. One after the other was given in marriage to him each day. On the final day, Vishnu appeared in the form of 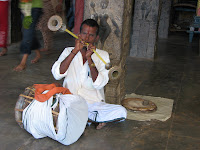 VarahaMurthy, combined all the 360 brides into one person, Akilavallinachiyar, and placed her on his left side (ida vendai), in contrast to Mamallapuram Aadi Varaha temple, where the goddess is to the right of Aadi Varaaha (Tiruvalavendai). The processional image came to be known as Nityakalyana Perumal, and the village Nityakalyanapuri. Komalavalli the first of his brides is enshrined in a separate sanctum. The vimanam here is called Yagna vimanam, or Kalyana Vimanam. Markandeya, Mahabali and Galava rishi are believed to have worshipped Vishnu here.
at May 06, 2007