Tiruverkadu :
After Tiruvidendai we proceeded to Vandalur where we stopped for lunch at Sri Padmam. Then we reached Tambaram & took the bye pass and reached the Poonamallee high Rd. and turned left. Road widening was in progress and the Arch on the Highway (just before Velappan Chavadi) leading to Tiruverkad had been demolished. Our next stop was the Karumariamman temple at Tiruverkad located approx. 6 kms from the highway. The Karumaariamman temple is one of the most revered and visited temples in the vicinity of Chennai. It enshrines an image of Karumaariamma, discovered in an anthill.
This shrine was enlarged and rebuilt in the middle of the 20th century. There are shrnies here to Vinayakar, Subramanyar, Surya, Chandran, Maduraiveeran, Vaattavaraayan, the navagrahams and Perumaal. A tank is located in front of the temple entrance. The stalavriksham here is the neem tree, or the Veppa maram.
As per legend Devikarumari approached the Sun as an old nomadic lady. He ignored her and Devikarumari became angry and immediately vanished. The Sun realising his mistake begged Devikarumari for forgiveness. The Sun requested Devikarumari to celebrate Sunday and she accepted this. He also got permission from Her to pour on her the Sun rays twice in a year in the month of Panguni and Purattasi.
Once Vinayagar performed Abishekam on Devi Karumari using Valampuri Conch. So She blessed him that the first pooja would be done to Him only.That is why only after offering prayer to Vinayagar at the left side of Dwaja Sthambam we should go round the temple corridor.
While Lord Siva was ruling Thiruverkadu along with Balambiga, Devas who were tortured by demons rushed to Lord Siva for help. Lord Siva told Uma Devi alias Thiruverkkani that he is going to the kingdm of Devas until His return He empowered Thiruverkanni to perform all the five sacred duties ( Creation, Protection, Destruction, maintain and bless) and gave her ashes from his body. Goddess Verkkani ordered Agasthiar to select a place at north eastern side to rule the world. Agasthiar heard an auspicious voice , "Agasthia! the place where you are standing itself is going to be a sacred one". As Agasthiar turned, Goddess came near him and said this place would remove all sins. She performed five sacred duties with the help of ashes given by Lord Siva. At that time she appeared in the form of seven divine powers.
Thaipoosa Latcharchana and Poornima Latcharchana are very auspicious. Other important festivals are. Masi magam, Tamil new year, Panguni uthiram and Garudaseva. Sundays are very special.
Vedapureeswarar Temple : Also situated in Tiruverkaudu. This an ancient temple dating back to the Chola pe 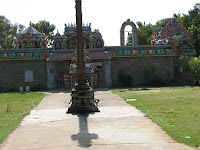 riod as per stone inscriptions. Behind the Shiva Lingam, Ambal Balambikai & Lord Shiva are depicted in Kalyana pose for the benefit of Sage Agastyar. He is also called the Lord of all the Vedas hence the name Vedapureeswarar. The four Vedas stood in the form of 'vela' trees hence the name Verkadu. The white Vela tree is the sthala Vriksham. Thi 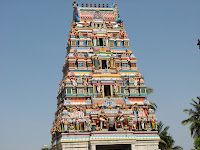 s is also the birth place of Moorkanayanar one of the 63 nayanars. After killing of Asura Soorapadman, Muruga worshipped Shiva here hence there is a Shiva Lingam in the Murugar Sannithi. He also created a well with his Vel called Velayutha Theertham. This Ambal is also worshipped as Karumariamman at Turuverkad.
Mangadu Kamatchiamman :
Sri KamakshiAmman Temple is situated at Mangadu off Ponnamallee High Road. Kamakshi or Parvati is enshrined here celebrating her austere penance and meditation. This temple is believed to have been in existence during the peirod of Aadi Sankaracharya. Sri Adi Sankara came here and installed Ardhameru (Sri Chakra) which is rare of its kind in India. The sanctum here enshrines Kamakshi, and a Sri Chakram. Legend has it that Kamakshi performed severe austerities in a grove of mango trees. The utsava murthy here is referred to as Raja Rajeswari.
The image of (idol) Sri Thapas Kamakshi in Vamapadangushta pose in the midst of Panchagni resting the left leg on Agni and folding the right leg. Her left hand is raised above her head holding a Japamala. It is said that Sri Kamakshi performed her Tapas (penance) and got married to Sri Ekambareswar at Kanchi (Kanchipuram). If any unmarried girl comes and worships to Sri Kamakshi she will also get married.
The other temples situated in this place are Sri Velleswarar and Sri Vaikunda Perumal. Saint Suryachariar got back his eye sight by worshipping Sri Velleswarar. It is also said that Sri Vaikunda Perumal came to this place with gifts and ring for the marriage of Sri Kamakshi with Lord Sri Velleswarar, we can see the ring on Lord's right hand of the moolasthana vikragam (idol) of Sri Vaikunda Perumal.
AUSPICIOUS DAYS: Fridays are very special in this Temple. 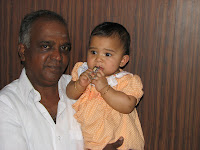 Arumugam, a well known & popular retired Superintendent from HR&CE (and a loyal subordinate who had worked with devotion & dedication under Shobhas father) had also accompanied us on these visits. Due to his presence special 'raja maryada' was conferred on us by the Archakas. For Shobha this was reminescent of her early days when she had frequently accompanied her father (who is a retd. Dy.Commissioner from HR&CE) on temple visits and recieved awesome respect befitting his position & status.
at May 06, 2007