Day 2 - 22 Sept'07 :
Theosophical Society,Besantnagar : Founded on the Banks of the Adyar river in 1875 by Col.H.S.Olcott and Madame H.P.Blavatsky the primary objective being Universal Brotherhood. Later Annie Besant succeeded Col.Olcott after his death.
A walk through the campus takes you into another world altogether. Its amazing that I had not never stepped into this extraordinary place before. Situated on arou 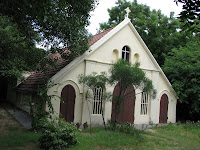 nd 3 acres of wooded land with many exotic varieties of plants & trees, the air is fresh, scented,serene & sublime. A unique feature is the large Banyan tree situated over 40,000 sq.ft the second largest Banyan cluster in the country. The mother tree has rotted away some years ago but the the r 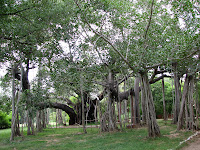 oots continue to grow & spread. It is said that this 200 hundred year old tree was grown from an off shoot from the original banyan tree under which Buddha attained enlightenment. As you take a walk through the place you come across a temple (The Temple of Light consecrated by J.Krishnamurthi in 1925), a church, a Buddhist shrine & a P 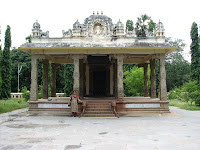 arsi Temple of Fire. You feel refreshed & renergised as you come out again.
From Besant Nagar we cross the Adyar Bridge, go past the Ambedkar Memorial & Ayyappa Temple & Chettinad School, cross the Quibble Island Cemetry & reach Santhome where one of India's oldest churches is located. San Thome Basilica is a Roman Catholic cathe 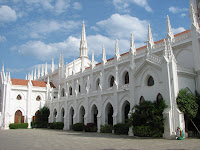 dral built in the 16th century by Portugese explorers, and rebuilt again with the status of a cathedral by the British in 1893. It is supposedly built atop the tomb of one of the 12 Apostles of Jesus, St. Thomas. The apostle is believed to have preached in Chennai between 52 A.D. and 72 A.D., when he is said to have been killed on St. Thomas Mount. after taking some nice shots w 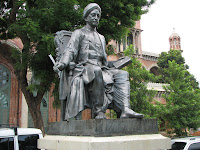 e proceeded via Marina Beach to Madras University campus to buy some books on Tamil History. The Marina Beach is a beach situated along a 12 km shoreline along the Bay of Bengal extending from Besantnagar to Fort St.George. Olive Ridley Turtles nest along the Neelankarai section of the beach towards 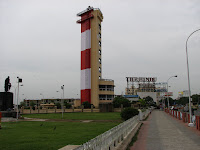 Mahabalipuram.Watching the sun set and rise from the beach is a fascinating experience. Brisk early morning walkers & joggers enjoying the refreshing & invigorating air is a common sight. Though bathing and swimming can be dangerous, as the undercurrent is very strong, many people venture out to swim. In the evenings, the beach is virtually a fair ground with various kinds of ent 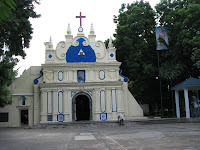 ertainment and food stalls lining the beach.
The original lighthouse was located at Fort St.George near the Chennai Port. This was later decomissioned after the present one was constructed at the south end of the Marina beach near Santhome. The structure also houses the meteorologic 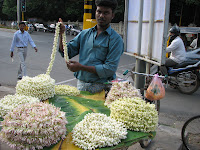 al department and is restricted to visitors.
We ended the tour with a visit to Luz Church tucked away in a tiny corner of Mylapore.The church has lent its name to the area around it and to the road leading up to it as the Luz Church Road.The church was built by Franciscan missionaries from Portugal in honour of Mother Mary in 1516. Our final stop was the Nilgiri's Supermarket to buy some pastries & here was this guy selling fresh malligai flowers & I just couldn't resist taking a shot. Malligai Poo is a favourite with Chennaite ladies and the aroma is simply seductive. The unit of measurtement is one mozham ie. the length of your fore arm
at September 26, 2007