Vadapalani Temple :
From Padi after worshipping at Thiruvallidhayam, we drove throug 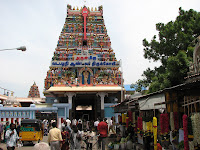 hTirumangalam, Mogappair, Koyambedu,SAAF village into Vadapalani. Before going to the temple we stopped over at the nearby Saravana Bhavan drive in restaurant for a wholesome South Indian breakfast. Vadapalani is one of the most frequently visited temples in the Chennai city. It is located near Andavar Koil Street. Vadapalani temple used to be a small thatched shed some 125 years ago. The 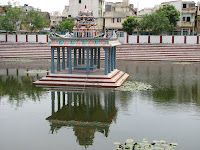 temple is dedicated to Lord Muruga. Annaswami Tambiran, a great devotee of Lord Muruga who built the hut and put an image of Lord Muruga in it. While worshipping Muruga, Annaswami in his state of trance started uttering words that became popular as Arulvak. After his demise other devotees carried on the mission. The place became popular and offerings in great amount were secured by the head maintaining the temple. One great names among the contributors responsi 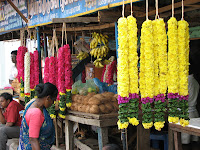 ble for constructing the temple is of Kripananda Variyar.
The temple at Vadapalani is primarily dedicated to Lord Muruga. His sanctum is surrounded by Vinayakar, Dakshinamurthy, Skanda Vishnu, Chandikeswarar, Brahma & Durgai. Some other deities, besides Lord Muruga, that are worshipped here include Lord Shiva, Goddess Parvathi, Lord Ganesh and Lord Anjaneya. The temple is provided with a number of courtyards featur 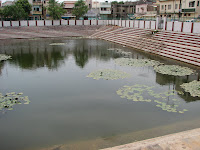 ing many sannidhis - varasiddi vinayakar, chokkanathar, Parvati, Kali, Bhairavar, Shunmugha with Valli & Devayani etc.
The temple entrance is covered with a rajagopuram which is adorned with images depicting the legends of Skanda Puranam. The temple tank is large with lotuses floating in the clean & pure water. The tank is enclosed by a protective wall and has steps to facilitate those who want to bathe. On the eastern wall of the temple structure are bharata natyam gestures. The temple is provided with a large hall were marriage ceremonies are performed - one of the premier places for performing marriage and about 7000 marriages are performed here annualy. The festival ceremonies held in the complex include that of Skanda Sashti and Panguni Uttiram.
After major renovation work, a Kumbashikam was held here last month. The cleanliness & newness is apparent.The gopurams looked very colourful and fresh after the recent repainting.The rich polished granite floor gave the temple an ostentatious look. The archakars kept chasing you for archanais which were carried done quickly & mechanically.
at September 30, 2007