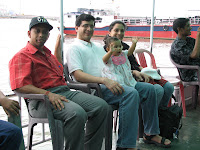 ng several Kerala traditional items - boiled rice, kalan,thovaran, mezhukku varatty, kootu, sambar, rasam for the die hard veggies and chicken noodle soup, meen kozhambu & kozhi curry for the those who dared to be brave ! Topped off with payasam & ice cream. Excellent stuff at moderate rates. Next we proceeded to the marine drive and drove along the sea side till we reached the tour agents office where we booked 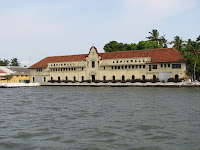 our seats for the 2.30 pm cruise. We took our seats on the top deck for an unhindered view of the harbour. There was an apology for a tour guide who confessed he has been recently appointed and he was generally uninformed & unintelligible. We could see Cochin Shipyard, Naval Dockyard, Port Trust,Marine drive with its highrise buildings and Willington Island-a man made island created with dredged material while deepening the Cochin Port. Both the old traditional and the new contemporary buildings housing the Cochin Port Trust offices are located here. So also is the staely Aspinwall House . "Kochi" is considered one of the finest and most picturesque harbours i 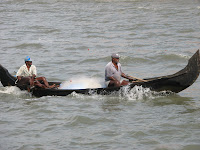 n the World. For over a 1000 years Greeks, Jews, Arabs, Chinese, Portugese, Dutch and the English have all come here for trade. With the advent of Vasco da Gama in 1498 Kochi catapulted to International fame and became a focal point for International spice trade.
During the cruise we could see several ships in the harbour - passenger liners, bulk cargo carriers & container carriers apart from a number of smaller boats ferrying tourists. We also saw several fishin 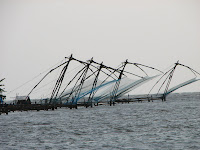 g trawlers and small motorised boats casting nets into the sea. We were extremely fortunate to sight several dolphins who surface briefly from time to time before pivoting back into the water. Sea gulls were flying all around making their characteristic screeching sounds and occasionaly diving into the water and magically emerging with fish in their beaks.
After about an hour's cruise in the Vembanad L 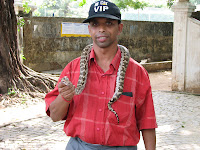 ake (backwaters) we arrived at Fort Kochi (there isn't any fort there -the name is misleading like Fort area in Mumbai). The Chinese nets at the entrance of the Harbour were a fascinating sight. These nets with pivots of wood were introduced by traders from the Court of Kublai Khan. We disembarked and our guide led us to the St.Francis Church. Enroute we saw campuses of the colonial style Bastion Bungalow (now serves as the official residence of the district coll 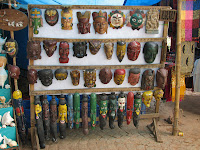 ector) and the Cochin Club-a typical traditional English style club where surprisingly no alcohol is served. Several shops on the street peddling fancy and quaint items - masks, sea shells, puppets, necklaces, bangles et. all and a guy with a baby python who allowed the fearless to wear it around their neck and be photographed. Guhan decided that he had a brave heart ! We entered St.Francis Church removed our footwear and 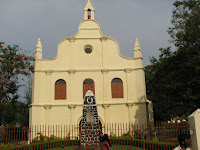 spent a few minutes in silence. This Roman Catholic church was built by the Portugese in 1503 & is believed to be the first church built by Europeans in India. It has a bell house at the top housing a shiny brass bell and clock with black dial and Roman numerals in the front. The time when I captured the picture was 4.05 pm. Vasco da Gama was originally buried here after he died in 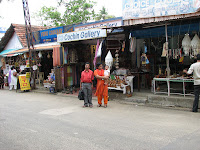 1524 before his remains were returned to Portugal 14 years later.The church was taken over by the Dutch after they captured Cochin ( Kochi ) in 1663 and converted into a Protestant Dutch Reformed Church.
We got back on board again and resumed our backwater cruise & proceeded towards Mattancherry. There we alighted and our guide took us straight to the Dutch Palace & the Jewish Synagogue both of which were unfortunately closed on Fridays. The Dutch Palace was built by the Portugese and presen 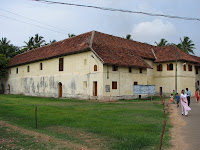 ted to the Raja of Kochi in 1555. It became known as the Dutch Palace in 1663, when the Dutch renovated the palace and built some extensions. It features Kerala Murals depicting Hindu art, portraits and exhibits of the Rajas of Kochi. At the entrance we found this dark skinned smartly attired native woman wearing beads & bangles selling peacock feathers, old coins & stamps. She was delighted when I asked for permission to shoot her picture.
The Jewish synagogue in Kochi was built in 1568 AD. Scrolls of Old Testamen 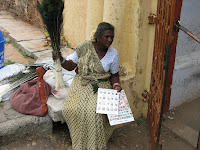 t and a number of copper plates inscribed in the Hebrew script are preserved in this Synagogue.The Jewish Synagogue is the oldest Synagogue in the common wealth countries. Mattancherry houses many quaint antique & spice shops which are a haven for the souvenir hunters.We got back on the ferry once again and spent the last one hour cruising leisurely and returning to shore around 5.30 pm. We were all tired at the end of the day but the backwater cruise was indeed one of the most incredible & mesmerising experiences of my life. We will all be carrying enjoyable & enchanting memories of this trip and will perhaps be returning for more cruises in this 'kayal' at every available opportunity.
at May 09, 2007