After a satisfying lunch of pizza and beer we headed for the Great Salt Lake & Antelope Island. The weather was pleasant and the views of the countryside and mountains were captivating. We were low on gas and we stopped over at a gas station to fill up. In the US you had to self fill gas and pay by credit card. There are no "attendants" at the gas station ! Amazing isn't it ?
After this we took the appropriate exit from the free way to take us to The Great Salt Lake. There was a checkpost and we had to pay a fee for entry and we were given printed pamphlets providing some facts and figures,climate,flora & fauna ec. As we drove on the Lake appeared on either side of the drive way - breathtaking and panoramic. There were a large number of local and migratory birds that could be seen on the lake: either flying,wading or sitting on the waters edge.
Now for some facts: The Great Salt Lake is one of the most asked-about tourist destinations in Utah. A remnant of the massive ancient Lake Bonneville, the lake is now landlocked and its waters are salty. It is the largest lake between the Great Lakes and the Pacific Ocean, and is the largest saltwater lake in the Western Hemisphere.
At the end of the drive we reached Antelope Island. But first some pictures of our drive into the Salt Lake: 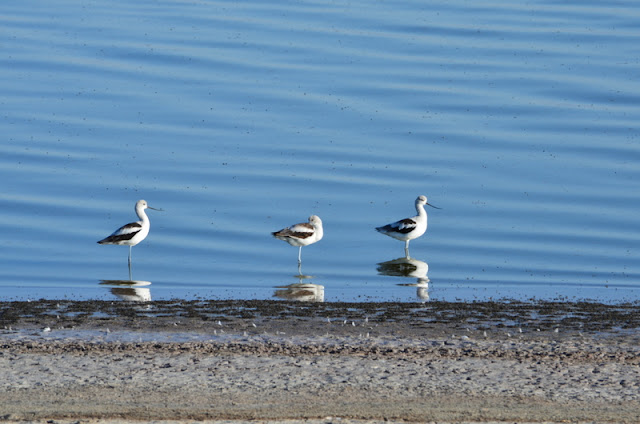