10 December 2017: After a good rest in the hotel room we went to the Adi Kumbeswarar temple in the evening. It is a 5 minute walk from our hotel.We walked through a bazaar packed with shops & vendors selling coconuts, flowers, vegetables & fruits and stray cows meandering around.The smells from the bazaar were pleasant and reminiscent of Mylapore & Pondy Bazaar in Chennai. The Temple is fairly expansive and the corridor leading the the main temple is packed with shops selling a range of useful traditional house hold items - brass,iron,stone vessels,pots & pans,coconut graters, kolam makers,aapam pans, idiyappam makers etc. The rates are reasonable and if you are a good bargainer you can get hefty discounts. 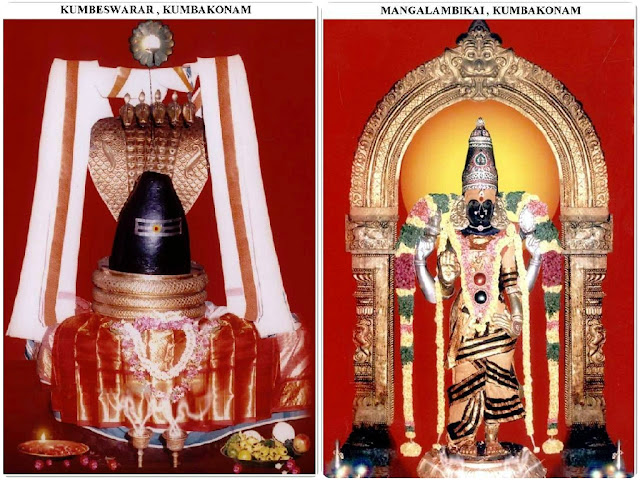 We reached the main sanctum of Adi Kumbeswarar around 7.40 pm and by that time the evening deeparchanai had just been completed and we narrowly missed it. We prayed at the sanctums of Kumbeswarar & Mangalambikai. The lingam is a swayambu or self formed lingam. It is made of sand hence no abhishekam is performed.
Apart from this there is also a separate sanctum for Somaskandar ( Swamy, Uma & Skandar). This is a bronze Utsavamurthy or festival idol.
Legend: It is believed that the name of the town Kumbakonam is derived from legend associated with Kumbeswarar Temple.It is believed that the mythical pot (Kumbham) of Brahma contained the seed of all living beings on earth. The Kumbham is believed to have been displaced by pralaya ( destruction of the universe) effected by the arrow of Hindu god Shiva the destroyer. Ultimately the pot came to rest in this place and the town got is name Kumbha-konam.
History: The temple has been in existence since the 7th century and considerably expanded during the rule of the Nayaka Kings during 15th Century.