21 January 2018: Ramu and Shobha from Coimbatore  were arriving  Madhgaon today (4.00 am) 21st morning - bang in the middle of a crippling taxi strike paralysing all tourist traffic at airports/Rail heads. After a few frantic telecalls to Shorty/O Resorts it was agreed that the Hotel would send a car with private plates for pickup. The hotel was ostensibly taking a risk and if their subterfuge was discovered would incur the wrath of the local taxi operators. R & S were advised to exit the Madhgaon station incognito, tip toe silently towards the waiting car and drive away surreptitiously. Of course O Hotel would charge a nominally higher fare of Rs.3150/- for services rendered against the normal fare of Rs.1500/-.
About Candolim:
Candolim is a small town in the western Indian state of Goa. Standing on the shores of the Arabian Sea, it’s known for its amazing Beach and to the north, lively Calangute Beach. In the south, the sturdy walls of Aguada Fort, built in the early 1600s under Portuguese colonial rule, surround a 19th-century lighthouse. The whitewashed, centuries-old Church of St. Lawrence stands on a nearby hill.
Flea market Arpora:
With food stalls offering cuisines from all over the world, the Saturday night market is every food lover’s paradise.For street shoppers who love flea markets Goa is a dream come true. Be it chilled beer, warm chocolate waffles, junk jewelry, handcrafted art pieces, tattoos, good music, scarves, hammocks, or spices, the flea market have it all.

Day 2 at O Resorts was a leisurely affair.The day began with joyful greetings, warm and vigorous hand shakes, beaming smiles, hearty embraces, emotional exchanges, some backslapping, humorous interludes & selfies. Breakfast was served at the special raised wooden floored lobby open at the sides. An elaborate spread was awaiting us - an array of  South & North Indian & continental dishes to cater to every palate . Post breakfast some headed down town Candolim for exploration & sundry purchases while others headed to wards the beach to relax, indulge in sport, sip beer  & wolf down some incredible sea food - Gill and Livleen fell into the latter category. Yet another team (quartet of Rajat,Pimp,Bhav & Guvrus) sneaked away for a quiet game of contract bridge. 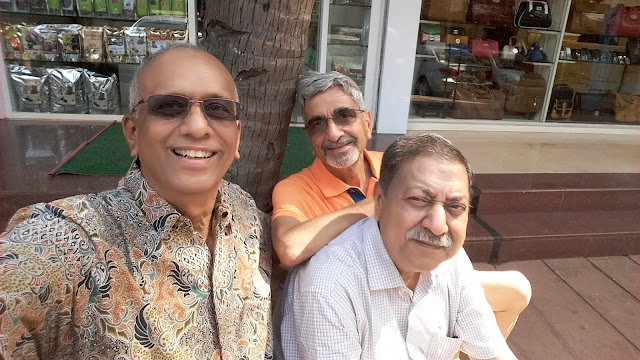 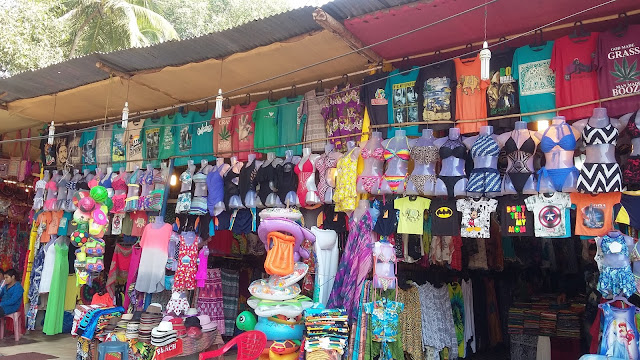 Evening started off at 5.30 pm for drinks & snacks at the Romax Shack on the beach watching the sunset. There was an array of alcohol - scotch, vodka & wine and short eats. Gill contributed with an extra special single malt which he has picked up at Delhi duty free. Dinner was at The Calamaris - also on the beach a walking distance from Romax. A mesmerizing candle night dinner right on the beach sands under the starry skies creating a magical ambiance. The alcohol continued to flow on the dinner table. The ladies were happy sipping exotic mock tails and sparkling wines. Animated conversations interspersed with wit & humor and at times bursts of laughter and occasionally heated discussions sums up the dinner interactions. There was a DJ belting out the latest Bollywood & Goan songs and inviting people to go over to the dance floor. Mech'71 ers & wives were deeply engrossed in vigorous bargaining with a salesman peddling psychedelic lights of various sizes,shapes & designs. The salesman had a field day as he successfully off loaded most his wares that evening - Mech'71 being major beneficiaries. The dinner concluded with a round of choice desserts for all.
Three Cheers to the gracious hosts for the evening at Romax & Calamaris: Bhav Dutt & Indira Dutt ! 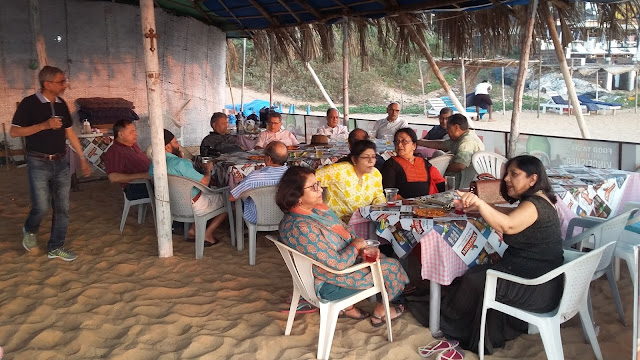 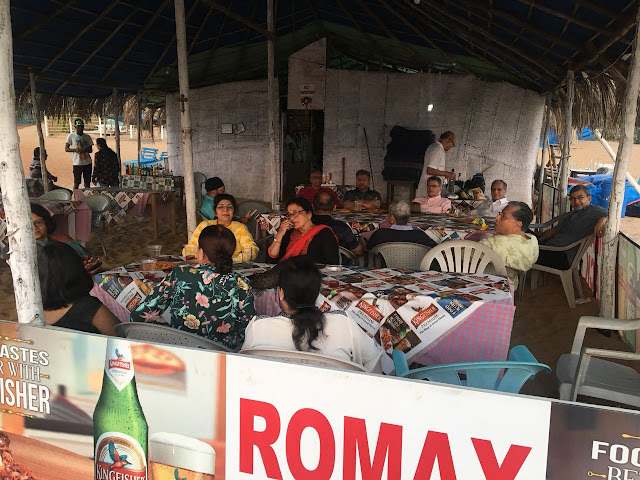 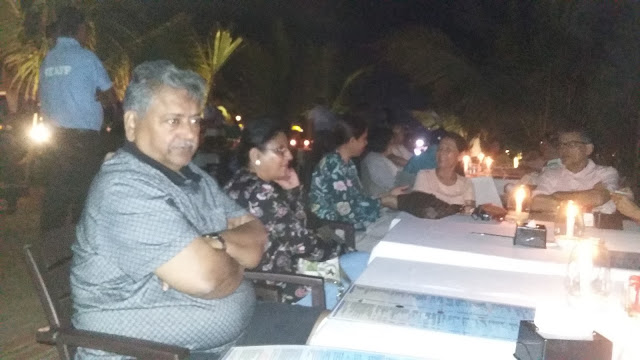 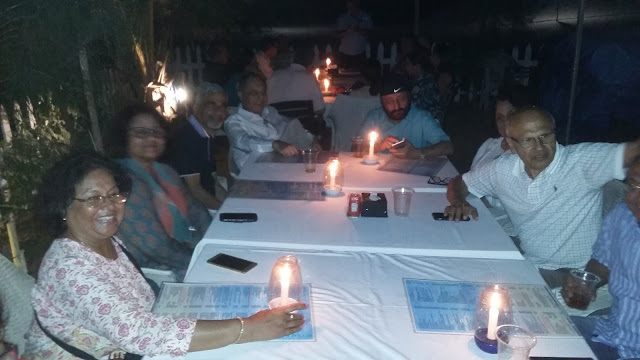