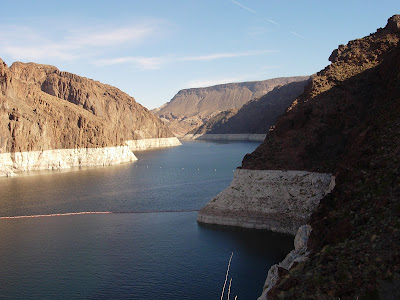 6 November'06 :Left Vegas around 8.30 am for Hoover Dam enroute to Grand Canyon. For breakfast we picked up cheese danish & croissants which we consumed on the way. Reached Hoover Dam in about one hour. Hoover is the largest concrete gravity arch dam in the US - a colossal dam with a magnificent view. Constructed 1931-36 between the US States of Nevada & Arizona in the Black canyon of the Colorado River. Also known as the boulder dam it was named after the former President of the US Herbert Hoover. It is a National Historic Landmark. Lake Mead is the reservoir created behind the dam. It produces 2080 Mega watts of power.
The Dam crosses the time lines between the two time zones ie.The Pacific Time Z 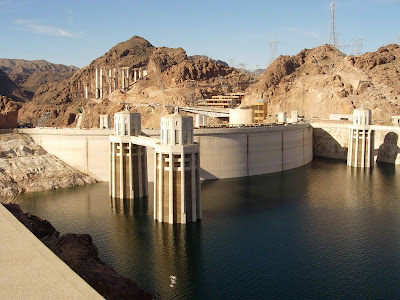 one & The Mountain Time Zone. Due to excellent weather conditions & bright sunshine we could take some wonderful pictures.

With Bhavana at the wheel,we then continued our journey on the Highway towards the Grand Canyon-a distance of around 280 miles south east of Vegas. The vegetation was sparse & the traffic thin. Against speed limits of 65-75 mph we were averaging between 75-90 mph. Progress was quick.We soon reached Williams where we stopped for gas. We used the short break to stretch our limbs & to feed the baby. This was my first experience on long distance with Bhavana at the wheel. I must admit that I was a bit apprehensive & nervous to begin with. But soon I started relaxing when I realised she was such a good driver with complete control & command of the vehicle.
We reached Grand Canyon National Park around 2.00 pm & straightaway proceeded for lunch to the Bright Angel Lodge & Cabins. A log cabin construction with looks of the wild west it offers rooms with nice views of the GC. Lunch consisted of a colossal Veggie burger - the biggest I have eaten. 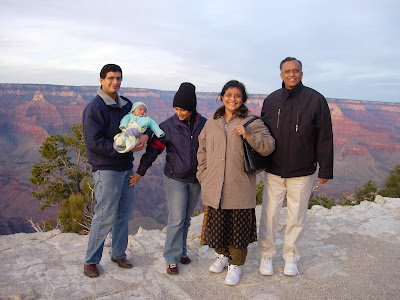 After lunch we proceeded to to see the Grand canyon.The Grand Canyon is a great chasm carved over millennia through the rocks of the Colorado Plateau. It is more than an awe-inspiring view. It is more than a pleasuring ground for those who explore the roads, hike the trails, or float the currents of the turbulent Colorado River. Although first afforded Federal protection in 1893 as a Forest Reserve and later as a National Monument, Grand Canyon did not achieve National Park status until 1919, three years after the creation of the National Park Service. Today Grand Canyon National Park receives close to five million visitors each year - a far cry from the annual visitation of 44,173 which the park received in 1919. Grand Canyon National Park, a World Heritage Site, encompasses 1,218,375 acres and lies on the Colorado Plateau in northwestern Arizona. The land is semi-arid and consists of raised plateaus and structural basins typical of the southwestern United States.We spent a mere 3 hours at the Grand Canyon but enough to see glimpses of the awesome & breathtaking views of the Canyon in the late after noon & at sunset. This was followed by a visit to the multiplex in the park which runs continuous I-Max shows of the Grand Canyon - its history of ancient inabitants & how they were exterminated by waves of settlers who rafted down the treachorous Colorado river in search of gold. An extraordinary experience & a must see for all visitors. We returned to Vegas & the comfort of the Stratosphere for the night.
7th November'2006 :
Slept till late morning in an effort to overcome the fatigue from the previous days marathon drive of 600miles ! Checked out @10.00 am.Wandered around in the jeep for a while. Did a spot of window shopping. Around noon brunced at IHOP - International House of Pancakes. I was served pancakes with generous amount of whipped cream & dripping with abundance of strawberry syrup. It was an unforgettable culinary experience - recommended only for the brave and adventurous.Rohit & Bhavana then navigated their way back to Vegas airport. It was time to bid adieu to Las Vegas-a memorable experience.
at December 11, 2006