Visited Robert Mondavi winery at Napa Valley situated about 80 miles from Daly City.Its special feature is its mission style architecture with expansive archway & bell tower which has become a landmark.This is one of the best known wineries in Califor 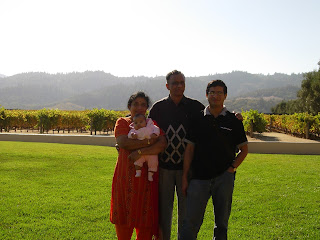 nia producing some of the most exquisite wines in the United States.Founded in 1966,the first major winery built in the Napa Valley in post prohibition era,helped establish the foundation of modern day Californias wine business.

Reached the winery around 10.am just in time to take the first tour of the morning.The winery is situated on its historic 550 acre To Kalon vineyard. Daily tours are arranged from 10 am - 4.00 pm. Total duration is 75 minutes. Children under 13 are not permitted. Our tour leader was estimated around 65 years-but very agile,talkative & witty(at least she considered herself witty as she frequently laughed at her own wise cracks !). Apart from Shobha & I, there were 8 others in the tour of various nationalities.The tour started with a visit to the vineyards. Unfortunately harvesting season for grapes was over & we could find only residual unplucked grapes unsuitable for wine making. We were however allowed to taste the residual fruit-very sweet indeed.We then went into the winery to understand the wine making process-fermentation, barrel aging & bottling. Finally we were taken for a seated wine tasting session -the wine educator explained the art of wine tasting. How to read the wine labels,why you swirl your wine in your glass,and how to smell,taste & describe wine. We got to taste 3 of Robert Mondavi's top wines.We were also given a discount coupon which allowed us 10% off on all wine purchases from their retail outlet. We picked up a 2004 Chardonay for $16/-

For more information refer to : http://www.robertmondaviwinery.com/iw_history.asp
at December 08, 2006