I left Chennai for Ernakulam on 12th night by Allepey express. The train entered Kerala early morning at Olavvakot Junction (Palakkad) and then followed the familiar route I had taken so many times as a child while travelling to home town on railway concession ticket - Ottapalam, Shoranur, Trichur (earlier name Trishivaperur. Kittan athan used to live here) ,Irinjalakuda ( Harikuttan my fathers cousin Kuttapan's son worked here as an English lecturer and later as Professor), Chalakudy ( Chalakudy athai lived here), Karukutty, Angamali (you get down here to go to Kalady the birth place of Hindu saint Adi Sankara), Aluva (we used to alight here to go to Perumbavoor where my grandparents lived), Edapally, Ernakulam Town & Ernakulam juncti 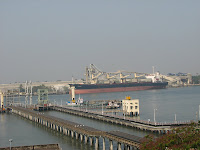 on. Earlier this train was going only upto Cochin but the route has since been extended to Alleppey. Between Trichur & Irinjalakuda you see several tile factories with tall brick chimneys -they are famous for their red colour designer tiles which are cheap but elegant and extensively used for house construction in South India.
I checked into Bharat hotel my usual jaunt and got my regular sea facing room. I could shoot some delectable pictures of the harbour which are shown her 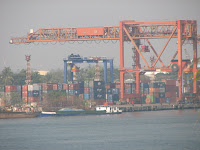 e. After finishing my official meetings I decided to visit the well known temples of Chottanikara & Tripunithara. My first stop was Chottannikara around 45 minutes drive.
I reached after dusk and the Vilakkumadam was beautifully illuminated. As you go around the puratthe balivattom you see shrines of Sree Moola Sthanam (Pavazhamallithara), Nagas, Jesetha Bhagavathy,Shiva & Ganesha. The Devaswom office is also located inside the campus. Rooms are vailable to devotees on request. A female elephant,Geetha, was tethered near the auditorium chewing on a stack of palm leaves. The entrance corridor to the temple stands on tall pillars with a large brass bell suspended from the ceiling. A large balance also hangs from the ceiling and is used for Thula Bharam. Another brass bell is mounted on a special stand near the Dwaja Sthambam.
Then you enter the sanctum and there is a small queue around the front mandapam. A special puja is in progress and the mandapam is well decorated with flowers and thinly cut palm leaves. People chant Amme Narayana Devi Darayana. The Srikovil door has gold covering and the wall sides are covered in silver - a Sanku & a Chakram on either side.
Chottanikkara enshrines Bhagawati - the mother Goddess, one of the most popular deities in Kerala. Rajarajeswari is the presiding deity here. The image of Bhagawati (Rajarajeswari) is of laterite; untouched by the human sculptor, this image is of irregular shape and is covered with a golden kavacam. The image has four arms. The upper right holds the discus, the left a conch. This deity is worshipped in three different forms - as Saraswati in the morning - draped in white, as Bhadrakali at noon draped in crimson, and as Durga in the evening decked in blue.
Adjacent to this image in the sanctum is an image of Vishnu in granite. Vishnu and Bhagawati together are referred to as Lakshminarayana. The prayers here address the deity as Amme Narayana, Devi Narayana and Lakshmi Narayana. Interestingly, the image here is not fixed to the ground and is mounted on loose sand. Water offered during ablution ceremonies percolates underground. There is also a shrine to Sastha depicting him with his consorts Purna and Pushkala. In front of the shrine are the flagstaff and the bali pitham.
To the south is a platform known as Pavazhamallithara where the deity is believed to have appeared first. To the south west is a shrine to Shiva. To the north east there is a flight of steps leading to the Keezhkaavu, a shrine to Bhadrakali. Enroute you see a counter for Vedi Vazhivadu - I pay Rs.10/- for exploding two country made crackers. The sound is deafening. As you go down the flight of stairs you find the shrine of Sastha to your right and pray there. As you enter Kizhkaavu you go around a large deep tank protected by high brick walls all round. The tank appears in disuse.
In the Keezhkaavu shrine is a paala tree with hundreds of nails driven into its trunk, as a mark of devotees having been exorcised here. Worship here is believed to rid devotees of evil influences, psychological ailments, evil spirits etc. Oil offering is an important Vazhivaadu here.
Much of the structure in this temple is a result of renovation carried out by the government of Cochin, in late 19th century.
Legend has it that a ferocious dacoit by name Kannappan who dominated this area, brought home a cow with the intent of slaughtering it. The cow escaped his butchering knife, and set him running in hot pursuit. His chase in vain, Kannappan returned home to find his beloved daughter playing with the very same cow. Complying with her request, he forsake the idea of killing the cow. His daughter passed away, and this greatly grieved him. Goddess Bhagawati appeared in his dream, and revealed to him that it was she who had come to him in the form of a cow. To his surprise, he saw two images in the cowshed the following day; the images were those of Devi and Vishnu. Kannappan built a humble shrine and worshipped the images in the cowshed. Eventually this shrine fell under repair and was discovered later and sanctified. It then grew into a shrine of the magnitude seen today, over a period of time.
I leave around 7.30 pm before the Sreebali - I want to try and rush to the next temple at Tripunnithira before it closes.
at March 17, 2007