14 March'07 :
Left Ernakulam @ 5.15 am towards Kottayam with a plan to visit the three temples of Vaikkom, Kaduthuruthy & Ettumanoor on the way. Passed a few small towns enroute - saw early morning walkers briskly marching on pavements and temple goers fresh after the morning snanam in veshtis & mundu nerithu and with chandanam & bhasmam applied to their foreheads. At the crack of dawn (6.00 am) I reached Vaikkom Mahadeva kshetram ( 33 kms from Ernakulam) and entered through a side entrance. A large spacious temple with big grounds and a massive vilakkumadam. As I went around I inhaled the fresh air which rejuvenated and energised me. You see a shining gold covered (or is it brass ?) Nandi installed at each corner of the Vilakkumadam. The Devaswom office, the Ottupura & the Kala Kshetram are all located inside. There is also a shrine of Pananchikkal Bhagavathy in the outer prakaram.
The Vaikom Mahadevar temple is one of the most celebrated Shiva temples in South India. Offering of prathal, or food is a form of worship here. In ancient times, feasts used to be cooked and offered to all devoteesVaikom Mahadever is also referred to as Annadaana Prabhu.The Deity: Shiva - Vaikom Mahadevar manifests himself as Dakshinamurthy in the panthirathi pooja in the morning. He is worshipped as Kiraata Murthy during the Uchcha pooja at noon and as Satchitananda in the evening.
Legend has it that Khara (of the Khara Dhooshana demon duo) of Ramayana worshipped Shiva at Chidambaram and obtained from him three Shivalingams and journeyed holding one Shivalingam on each hand and one in his mouth. He sojourned at Vaikom, and set the Shivalingam on the ground and to his dismay realized that it had gotten rooted to the ground. Kharan therefore installed the other two shivalingams at Ettumanur and Kaduthuruthy. He entrusted the Shivalingam at Vaikom to the care of Vyagrapadar. Vaikom therefore acquired the name Vyagrapuri which ultimately became Vaikom for short.
The temple:
The elliptical sanctum here is covered with a copper plated roof crowned with a golden kalasam. The height of the wall of the sanctum is just about a third of that of the roof. The building dates back to the 11th century, and the wooden panels and the murals date back to the 15th and 18th centuries respectively. The mukhamandapam in front of the sanctum houses the nandi. The wall of the inner prakaram is lined with columns of lamps (vilakkumaatam) on a wooden framework. The Dwaja Sthambam rises to a height of 317 feet.
Sree Bali was about to commence. The murthy is carried by hand by a priest who circled the seeveli pura thrice along with other priests and the musicians group. There were a handful of devotees and I was again one amongst them. 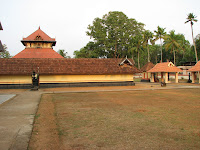 Kaduthuruthy : Left Vaikom at 6.40 am & reached Kaduthuruty around 7.10 am - a distance of 19 kms. This is the place where Khara installed the Shivalingam which he had held between his teeth thus the name Kaduthuruthy. This is a relatively smaller temple. The outer prakaram contains the shrines of Vaikatthappan & Ettumanoorappan on either side. It also contains shrines of Nagas, Brahmarakshas, Bhagawathy, Yakshi, and Sastha.

Ettumanoor : My next stop is Ettumanoor which is 16 kms from Kaduthuruthy.The Ettumaanur Mahadevar temple is one of the most celebrated Shiva temples in Kerala. The legendary Khara installed the third Shivalingam at this place. It is believed that visiting these triad of temples in a single day is of great significance. Legend also has it that Khara installed an image of Krishna in the north western corner of this temple.
There are several other legends associated with this shrine. Legend has it that Sh 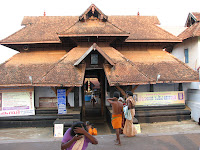 iva created a deer and set it to play in an island; when Parasurama reclaimed land from the sea, this island is said to have become part of what is Kerala now. The isle of the deer is referred to as Harinadweepa. The malayalam word for deer is Maan, and hence this place came to be known as Maanoor.
The temple: The west facing temple here has a circular sanctum covered with a conical copper plated roof crowned with a kalasam. The mukhamandapam in front of the temple bears two images of Nandi, one of stone and another of metal. Although there is no shrine to Parvati, the rear of the sanctum is revered as Parvati's shrine.
A rectangular circumambulatory passage surrounds the sanctum. The sanctum bears wood carvings of superior workmanship portraying legends from the Ramayana and the Bhagavata 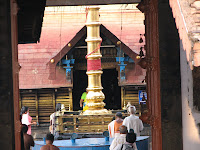 puranam.
Also of great workmanship are the murals on the western entrance to the temple; mention must be made of the painting of the dance of Shiva.
There are also shrines to Saasta, Ganapati and Dakshinamurthy in the temple. At the entrance to the temple is a large metal lamp; visitors make offerings of oil and the soot that collects from the burning of the oil is believed to have medicinal value.
The temple tank semi circular and there are separate entrances for men & women at the bething ghat. The water is clean and crystal clear.
I reached Kottayam had a nei roast & coffee at Suryas & left for the lawyers office where I had an appointment. Amazingly I reached his office at 9.00 am sharp and as I was getting down from the car the lawyer also reached. I mentioned to him about my trip to the three temples and the blessings I was carrying from Mahadeva for success in the arbitration case. He suggested that I should also visit Kumaranallur Kshetram which is managed by a group of Namboodiris who were his clients. Before I knew it he had picked up the phone and fixed up a visit for me. As the temple nadai closed at 11 am I had to proceed there directly from the lawyers office.
at March 17, 2007