Left Coimbatore for Trichur by road on 6th afternoon. Reached Trichur around 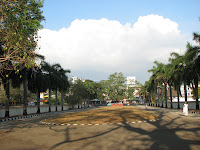 6.00 pm & straightaway drove to the Vadakumnatha Kshetram centrally located in a large circular maidan atop a small hillock. There is a nice wide driveway, as you enter from the circular road, lined by coconut palms on either side.This is considered amongst the most ancient temples in Kerala. Dress code for men is strict - white dhoti, no footwear & no upper garment. The Moola Sthanam is located outside and there is a nice big peepul tree there- the idol was originally installed here. At the entrance is a tall Deepa Sthambaham with a metallic ladder adjacent to it to enable volunteers to climb up to pour oil & light the deepams. Entry is through the Main gopuram(currently all four gopurams are under renovation) on the West and you find yourself transported into a different world altogether -first you see the large Koothambalam(constructed by the famous carpenter,sculptor & builder Perumthacchan) on the left. You walk past the Vilakk 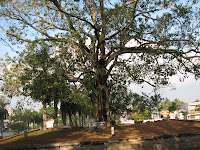 u Madam enter an intermediate passage where Nandikeswara (white bull) is installed and through the "chuttamabalam" into the inner sanctum or "agatte balivattom". You visit the circular shrine or Srikovil of Vadakkumnatha Swamy (Siva lingam) beautifully decorated with gold coverings. The idol of consort Parvathy is installed on the rear of the same shrine as Siva & Parvathy are inseparable. Next as per tradition, you visit and pray at the shrin 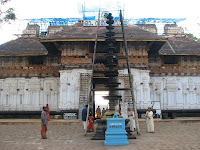 es of Ganesha, Sankarnarayana & Rama (the latter two are rectangular shrines) which are all located inside the chuttambalam. The Sree Koil walls are covered with murals or paintings which have considerably faded with the passage of time and require restoration.
Then you come out into the bahya haara (outer sanctum), and walk around the temple and pray at the Sree Koils of Goshala Krishna, Nandikeswara, Parasurama, Simhodara, Vyasa Sila, Vettaikaran,Ayyappan, Samadhi of Adi Sankara with Sanku & Chakram and finally the shrine of Adi Sankara which is covered with paintings on the outer walls depicting the story of his birth and life.
To the north of Simhodara there is a manch from where you face North & worship Kashi Viswanathar. There is another manch located at the South East from where you worship Chidambaranathar towards South East & Kodangallur Bhagawathy towards South. Then you proceed towards Southern Gopuram look towards South West & pray to Koodal Manickam. Next you go to the Manch on South West and pray to Orakathamma towards SW & towards the gopurams of Vadakumnathar, Rama & Sankarnarayana.
As per legend Parasurama, after getting rid of all Kshatriyas on earth,went to Mahendragiri to do penance. On the request of several sages he threw his axe towards the sea. The sea became land as far as the axe fell spanning an area from Gokarna to Kanya Kumari. This area is called Parasurama Kshetram. Then he went to Himalayas did penance again and requested Siva to come to Parasurama Kshetram & stay there. Siva agreed & sent Nandikeswara & Simhodara to select a suitable place for him in Parasurama Kshetram. Thiru Siva Puram was the place they selected which later became Thiru Siva Perur (changed to Trichur during British Rule) . Siva followed Parasurama along with Parvathy and others and when they reached the selected spot Siva disappeared and Parasurama found a linga below a peepul tree and this spot is called the Sree Moola Sthanam. The idol was relocated to its present Srikoil by the ruler of Cochin. This temple is considered to be the oldest in Kerala according to historians more than 4000 years old. Daily abhisekams are customarily done with tender coconut water and ghee. As per legend during the construction of the temple a piece of wood fell on the lingam and blood started gushing out. The devotees were stunned. A devotee by the name Pakkanar sugessted that if Ghee & Tender coconut abhishekam is done the bleeding would stop. When abhishekam was thus done amazingly the bleeding stopped. Thus this abhishekam became a custom.
There are 4 entrances in all but only the entrances at the West & East allow entry of devotees. Unlike Tamilnadu temples the gopurams are smaller with restrained architecture/sculpture so that the grandeur of the temple gopurams are not over shadowed. The temple campus (bahya haara) is rectangular and expansive and houses a large variety of trees, plants & shrubs (of these a majority are Banyan & Peepul trees) overall providing a calm, serene & ethereal atmosphere. This is a place where you can spend many hours in meditation and emerge with great energy of mind and body.
at March 09, 2007