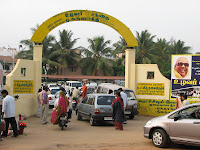 pt of Uzhavar Sandai or Farmers Market in Tamilnadu was introduced in the year 2000 during the DMK Government. Today Tamilnadu has over 140 Uzhavar Sandais of which 3 are in Coimbatore. This morning we decided to drive to the R.S.Puram Uzhavar Sandai located near the Forest College. We reached around 7 am after a 20 minute drive and the place was already quite crowded and there was frenzied activity. It was good to see that a large number of city folk have chosen to come to Uzhavar Sandai and encourage the farmers. They could very well have gone to any of the several modern and far more convenient & air-conditioned "Pazhamuthir Soolais" (that have cropped up all over Coimbatore) where you can move comfortably around well stocked aisles with push carts and buy vegetables/fruits at reasonable prices.
The parking lot was chock a block with cars hence I had to park on the road. The complex is very spacious and is managed by officers of Agriculture & Horticulture Depts. These officials visit nearby far 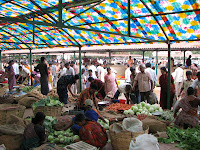 ms (radius of 25 Kms ) and encourage the farmers to bring their produce to the market. The farmers have to register and identity cards are issued. Free transport is arranged by the Dept to nearby locations. The stalls/space is rent free and is 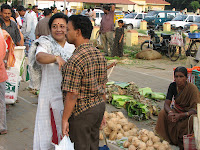 allocated on a first come first serve basis. Weighing balances are issued free on on request and returnable at close of business. The primary objective of this concept is to bring farmers directly in contact with consumers and eliminate the mafia midlemen totally. Thus the farmers get to retain entire profit witho 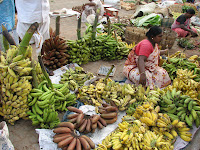 ut having to part with any commissions. Prices are fixed by the department. Prices of items are centrally displayed on a board in front of the office for the benefit of consumers. Prices are also displayed on a slate in each stall by the farmer . Farmers are not expected to sell at lower or higher prices and in the event of any malpractice the same can be brought to the notice of the officers concerned.
Coimbatore has 3 Uzhavar sandais in all - R.S.Puram, S 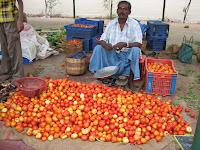 inganallur & Kurichi. The R.S.Puram unit is ranked no.1 in Tamilnadu in terms of daily turnover @ 50 tons/day. I had carried my camera and was shooting photographs at will. Peopl 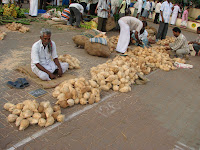 e watched me in amusement. One consumer even asked me if I was a journalist ! The Govt officers with whom I chatted were friendly and enthusiastically shared information. Our next stop was Annapoorna's for steaming South Indian Coffee & dosa/puri. Later in the day attended the first anniversary of the Kumbabhishekam of T.Stanes Pillayar. All the "Who is Who" of T.Stanes were in attendance along with their wives. There was a delicious South Indian feast as usual from Friends Caterers - traditionally served on plaintain leaves. Paladai pradaman, boli and jangiri were the special items.
The grand finale for the day was watching "Jack The Ripper" on History channel-a spine chilling, blood curling, spell binding four hour thriller (in two parts) which has Michael Caine in the lead role as Chief Detective from Scotland Yard. Jack the Ripper killed whores at nocturnal hours on London streets during 1888 and clinically removed their internal organs with the precision of an experienced surgeon. This film is a masterpiece and if you haven't seen it do not miss it next time .
at March 31, 2007