25 Mar'07 :
We had not visited Arulmigu Maruthamalai Subramaniar temple for almost a year. 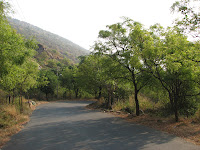 So we decided to drive over there on Sunday morning. The route we followed was the usual - Brooke Bond Rd (HLL has now sold the property and a massive commercial complex is under construction), cut across Mettupalayaam Rd (Mettupalayam is 30 kms from Coimbatore and it is from this point that the climb to Connoor & Ooty begins), get into R.S.Puram, drive past Forest College & Uzhavar Sandai (farmers vegetable market), cut across Thadagam Rd, past the sprawling Tamilnadu Agricultural University campus & Coconut Nursery, then Annalakshmi & Temple of Fi 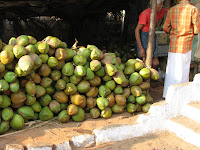 ne Arts Auditorium, into Vadavalli, past Bharatiar University campus, and finally reach the foothills of Maruthamalai.
Maruthamalai Temple, situated on a hillock, about 12 kms from Coimbatore, is an important temple dedicated to Lord Muruga. The temple gets its name from the Marut 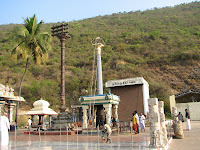 ha trees in the forests on the hill. The hills also have many medicinal herbs in their forests. The drive up the hills very scenic and once you reach the top you get a birds eye view of Coimbatore. There are a number of u-bends & hair pin bends and you have to be careful as you negotiate the bends uphill. The entry fee for cars is Rs.10/-
The word "Marudhachalapathy" or "Maruthamalai Andavar" means Master of Hills, abounding in Marudha tre 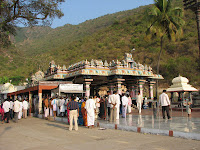 es. The name has also a legendary origin. A Siddha, overcome by excessive thirst and tiredness, sought shelter under the shade of a Marudha tree and prayed to the mercy of the Lord Muruga for a shower of water, which sprang at once as though by a miracle from beneath the tree! As water gushed out from the roots of the marudha tree, the Siddha leaped in joy, glorifying Muruga as the Lord of "Marudha" and "Jalam" (water) with the passage of time, "Marudhajalapathi" became "Marudhachalapathy.This temple was built about 800 years ago. The temple was renovated recently and Kumbabishekam (consecration) performed. The temple and its surroundings are abuzz with devotees who can be seen trekking the 700-odd steps to the top of the temple, as penance. There are frequent buses from Coimbatore city to Maruthamalai. From the base of the temple local buses ply to the temple. 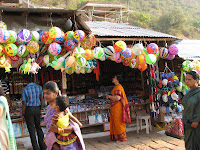 The "Marudha Thirtam" and the"Pambatti Sunai" are springs on the hills with holy waters for ablution and a dip in them cures a number of diseases for they contain Medicinal Properties.
After parking the car in the uphill parking lot, you walk towards a point where you meet devotees trekking up the walkway. You climb up a few dozen steps and you are 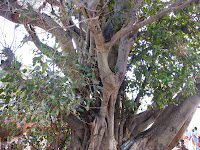 up at the Pancha Vriksham - an amazing amalgamation of five different types of trees-Peria Arasu, Chinna Arasu (arasu= peepul), Aal (banyan),Vengai, Kallichi. There is a Ganapathy located at the base of this vriksha. A few more steps and you are on top. A special entry ticket of Rs.10/- allows you to go close to the sanctum of Lord Subramania. The deity is richly covered in silver kavacham and holding a silver Vel. An idol of Pambati Sitthar is at the Lords feet. After watching Arati and receiving Tirtham and prasadam you exit after praying to Ganesha also covered in Silver kavacham.
You go around the outer sanctum and you see Patteswara, Maragadambikai, Sandikeswarar, Varadarajap 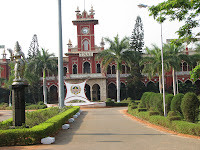 erumal, and Nava Grahas. Patteswarar sub shrine has Dakshinamurthy, Lingodbhavar & Brahma on the goshtams around the shrine. Around the Mrugar shrine goshtams you can see Nirtha Ganapathi, Sikivahanar, Dandapani, Senani & Durgai. Around the goshtams of Maragadambikai - Iccha Sakti, Gnana Sakti & Kriya Sakti. There is a large granite tiled Mandapam to the East, where devotees can sit down and meditate. There is a Dwaja Sthambam with Peacock in front facing the Lord and Ganesha facing the outside. There is a separate enclosure for housing the Thanga Theru (Golden Chariot).
On the Southern side there is another shrine termed as the Adi Moola Sthanam where the original swayambu stone forms of Murugar, Valli & Devayani are situated. To the West side of the Adi Moola Sthanam there are steps leading down to the cave temple of Pambati Sittar. This shrine has tremendous vibrations and people spend a few moments in meditation in the mandapam in front of this shrine. Sitthar would practice herbal medicine from the herbs available in the hills. He also had power over all the snakes that lived on the hills and controlled them. It is said that if one prayed at the Pambati Sitthar Shrine one can get rid of Naga Dosham. Pambati sitthar used to come up from the cave where he lived, and pay obeisance to Muruga every day. The main shrine to Muruga was consecrated during the lifetime of the Sitthar. Enroute to the cave is a shrine for Saptha Kanyas. There is a beautiful Poovarasu tree near this shrine.
For more details visit the temple website: http://murugan.org/temples/marudhamalai.htm
On our return drive we decided to stop over at the TNAU to take some memorable snaps of the main building and the coconut nursery.The Tamil Nadu Agricultural University 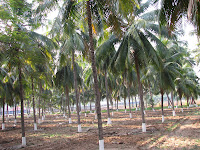 (TNAU) came into being on June 1, 1971. However, it had its genesis from establishment of an Agricultural School at Saidapet, Chennai, Tamil Nadu, as early as 1868 and it was later relocated at Coimbatore in 1906. Till 1946, the Agricultural College and Research Institute, Coimbatore, was the only Institute for Agricultural Education for the whole of South India. The Centenary year was celebrated last year on a grand scale.
at March 25, 2007