You can see below the pictures of the Kapaleeswarar Temple, an important Hindu Temple at Mylapore, Chennai, India. The main Deity is Lord Siva (known here as Kapaleeswarar) and his consort Goddess Parvati (known as Karpagambal). The main entrance to the temple is through the Eastern Gopuram- a tall regal trapezoidal tower carrying myriad sculptures depicting various Hindu Gods & Goddesses.
The name Mylapore is derived from the legend that Goddess Uma(another name of Parvati) worshipped the Lord Siva in the form of a Peacock (Myl in Tamil). Ptolemy the Greek Geographer (AD 90-168) referred to Mylapore in his books as 'Maillarpha' a well known sea port town with flourishing trade. Saint Tiruvalluvar,the celebrated Tamil author of Tirukkural(an ethical treatise), lived here nearly 2000 years ago. The Saivite Saints of the 7th Century, Sambandar & Appar, have sung praises of this shrine in their hymns. Mylapore fell into the hands of the Portugese in AD 1566, when the Temple sufferred a demolition. The present temple was rebuilt around 300 years ago. The most beautiful miracle associated with this temple is related in the Periapuranam - that of bringing back to life of the girl Poompavai by the boy Saint Gnanasambandar through his singing of Hymns in praise of the Lord.
St.Thomas, one of the Apostles of Jesus, is reported to have visited Mylapore in the 2nd Century AD. 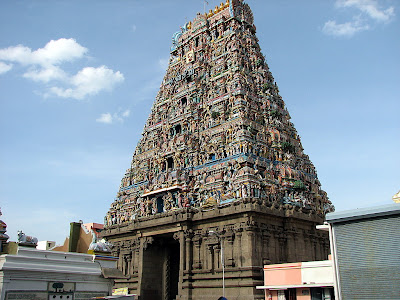 The Stately Rajagopuram or Entrance Tower in the Eastern side of the Temple. 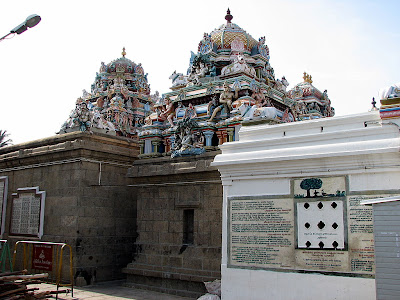 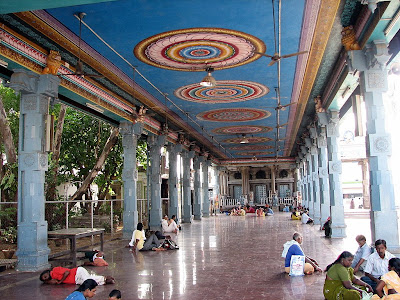 The Kolu Manpadam or long pillared hall - which is decorated with idols, dolls & a variety of themes during the Navaratri festival which is celebrated over nine days. 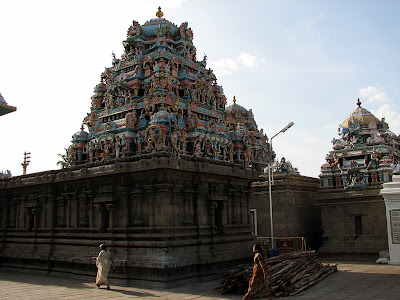 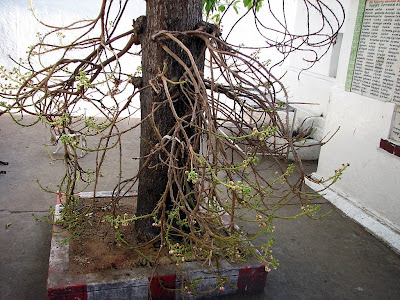 The Nagalingam flowers in bloom - the flower is in the shape of a lingam with a snake's (Naga in Tamil) hood over it. Hence the name of Nagalingam. 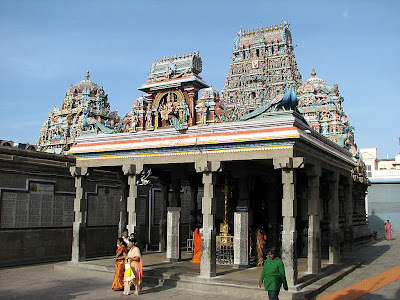 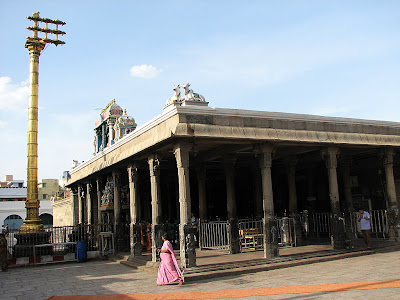 The pillared portico which leads to the main shrines of Lord Kapaleeswarar & Goddess Karpagambal. The Lord is West facing which is a unique position since in most Siva Temples the Lord is generally East facing. You can also see the Dwaja Sthambam or Flagstaff with brass covering which is an essential part of Hindu Temples. 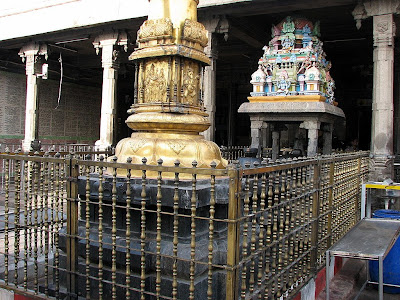 Here you see a close up of the base of the Dwaja Sthambham which carries images of Siva, Parvati, Ganesha & Muruga. In front you can also see the shrine to Nandi the bull which is the celestial vehicle of Siva. 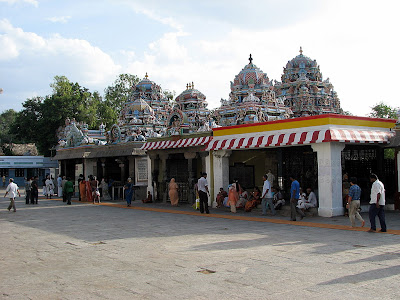 Finally after complete circumambulation you reach the sub shrines of the Navagrahas (seven planets), Jagadeeswara( another Siva Lingam), Narthana Ganesha(dancing Ganesha).
The Brahmotsavam or "Great Festival"takes place during the month of Panguni(March-April) for 10 days. On the 5th day is Rishabha Vahana-the Deity is taken out on a Silver Bull. On the eight day is the car festival - the deity is placed on a huge chariot and pulled by devotees around the temple. The float festival takes place in the month of Thai (Jan-Feb) when the deities are taken out on a float (Teppam) around the Temple Tank.
at July 07, 2009