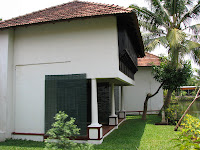 to Angamali and then veered to the left via Kalady (left of Kalady junction leads to the birth place of Adi Sankara as well to Malayatoor), crossed the bridge over the magnificent Periyar river (turn left at this point for Koovapady), into Perumbavoor- the place to which my grandparents had migrated from Koovapady, settled, lived & died. Before Perumbavoor th 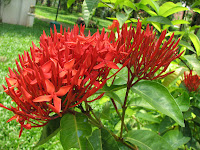 ere is a turning to the left towards the Kodanad Elephant Kraal or training Centre(10 Kms). I had visited this place a few times when I was young. From Perambavoor a left turn takes you to Kothamangalam, Thattekad Bird Sanctuary(30 Kms) and to Munnar (96 Kms). I however proceeded via Muvattupuzha, towards Ettumanoor & Kottayam. Around 30 Kms of the route was ghat road. The countryside was dotted largely with rubber & spice plantations and to a lesser extent with chakka(jack fruit) and banana p 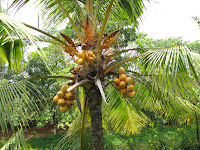 lantations. And of course lots of coconout palms everywhere.
I had a busy schedule at Kottayam; however I managed to squeeze in some time to visit the Lake Village Heritage Resort for lunch and to look around. It is a lush green planet of shimmering lagoon, meandering canals, herbal gardens & whispering palms. Amongst this stands the traditional Kerala style cottages- alongside the backwaters giving you the feeling of being in a Kerala Houseboat. There is lush green lawn all ar 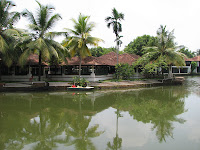 ound the cottages interspersed with multi coloured varieties of flowers in bloom giving a riot of brightly hued colours in sparkling sunlight - predominant of these are hibiscus and "tecchi".
The Lake Village is an inspirational reproduction of bygone Kerala characterised by ba 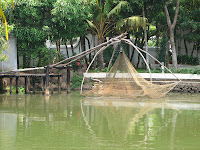 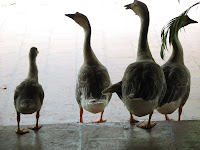 There are a number of fearless resident geese which live in the campus. I could get close enough to some to take some wonderful snaps.
The buffet lunch was a veritable feast - a combination of North Indian & Kerala cuisines topped off with ice cream,choco sauce chocolate cake,badam halwa and semiya payasam. After the heavy meal I was tempted to enter one of the wooden cottages, bolt the door from inside and take a nice long nap. Alas that was not to be as I had a meeting set up with the company lawyer immediately thereafter.
Here are some resplendent photographs for the connoiseur & nature lover. Good place to plan your next pleasure and leisure vacation !
at April 13, 2007 No comments:

5&6 April'07 : Our visit to Trichur & Guruvayoor happened to coincide with Easter. Easter, the Sunday of the Resurrection, is the most important religious feast of the Christian Lithurgical year, observed at some point between late March and late April each year. Easter Sunday falls on 8 April this year. It celebrates the resurrection, which his followers believe occurred on the third day after his death by crucifixion. In Western Christianity, Easter marks the end of the forty days of Lent, a period of fasting and penitence in preparation for Easter which begins on Ash Wednesday. The week before Easter is very special in the Christian tradition: the Sunday before is Palm Sunday (also referred as Yew Sunday), and the last three days befo 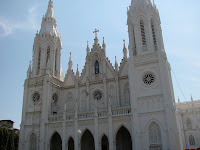 re Easter are Maundy Thursday or Holy Thursday, Good Friday and Holy Saturday (sometimes referred to as Silent Saturday). Palm Sunday, Maundy Thursday and Good Friday respectively commemorate Jesus' entry in Jerusalem, the Last Supper and the Crucifixion.
We decided to visit two big churches in Trichur - Shrine Basilica of our Lady of Dolores and The Lourdes Metropo 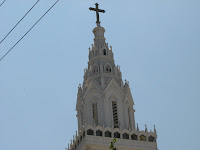 litan Church both magnificent monuments.
The Shrine Basilica is not only a highly visited pilgrim center, but also a tourist attraction. It has two colossal belfries built in gothic style. The church is 370 feet long east-west side and 180 feet wide along north-south side. The total plinth area of the church measures 25,000 square feet. The rear side of the Church has a tower measuring 260 feet in height.
Our Lady of Lourdes Metropolitan Cathedral is the tallest church tower in Asia, situated in the heart of the town of Trichur,the Centenary of which was celebrated during the historic visit of Pope John Paul II to Thrissur in 1986. The well decorated underground chapel of the Cathedral is a big attraction. On Dec 03, 2006 The Bible Tower of 260 feet height was dedicated to god which is considered to be the tallest ch 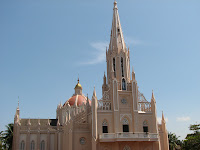 urch tower in Asia. I could not resist the temptation to shoot and I am presenting some memorable photographs.
Before returning to Coimbatore we decided to visit Harikuttan, my fathers cousin, who resides in Ayyanthole. In terms of age he is a contemporary of my brother Mottai (who is no more now). He was alone and his wife Visalakshi Ammal was away at Chennai. He was extremely apologetic about his wife being away. In the short span of 30 minutes we could discuss several wide ranging topics- the gregarious Harikuttan has the unique ability to switch topics one every minute.
at April 07, 2007 1 comment:

5 April'07 :
Left Cbte late noon by road. Coffee break at Aryas Vadakancheri, stop over at Vadakumnathar Kshetram for Darshan, nighthalt at Guruvayoor.. After dinner of nei roast and chapati kurma visited the temple for darshan of Guruvayoorappan and to witness the closing Vilakku ceremoney and Sheeveli. There were five elephants in attendance that night. The first one, an awesome tusker, was ready, decorated with exquisite "netti pattam" and the namboodiri mounted with the "Thidambu"(utsava murthy) & the vilakku ceremoney commenced. Meanwhile a volunteer started distributing Paal payasam - served in "cherattais"(coconut shells) . There was a mini rush and Shobha & I managed to get a few cherattaifuls each - real delicious stuff and considered to be a blessing. Three other elephants were also getting ready with "netti pattams".
After two rounds the first pachyderm appeared disturbed,disobeyed instructions & refused to continue its march around the temple. Rather it backtracked- a disturbing sign !Fortunately it obeyed the mahouts orders to kneel thus allowing the namboodidri to quickly dismount and retreat into the temple with the "thidambu". The volunteers advised devotees to quietly step away from the seevelipura & ascend the stairway leading to the Ootupura on the first floor - a safety precaution . Suddenly the sevelipura was deserted except for the elephants including the rogue (which had by now been tied with chains), the mahouts & some temple volunteers. We left the temple through another exit and are unaware of what happened afterwards. We were back at the temple early next morning @ 4.00 am and the morning ceremonies appeared to be proceeding normally as per schedule. We had good darshan.
6 April'07 :
We then went to Mammiyoor Mahadeva temple which is 1.5 Kms away. A visit to Guruvayoor is complete only if you pray at Mammiyoor. The entry is through a beautiful Gopuram (see photo) and as you enter you see a large peepul tree with nagas on the tarai built around the tree. A tall deepasthambam stands behind the tree. The two main deities are Shiva & Mahavishnu. You also see Vinayaka ( a Ganapathy Homam w 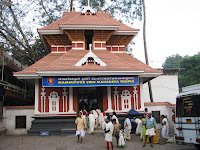 as being performed there), Subramania and Ayyappa. It is believed that Shiva and Parvati were originally in the Guruvayoor temple and due to space constraints they were moved to Mammiyoor. The murals adorning the exterior walls of the temple have vivid descriptions of scenes from Ramayana, Mahabartha, Devi puranam and Siva puranam.The sreekoils appeared to have been recently renovated and the murals were looking bright & clourful. On your right there is a separate area for Bhagavathy koil and besides that is the Nagas enclosure.
As you come out of the temple you see Sree Kailasam - a beautiful Devaswom building & through this is a passage leading to the temple tank. Its a beautiful tank with crystal clear water inviting you to have a snanam ! There are separate ghats (bays) for men & women.
From Mammiyoor we drove back to Trichur and went straight to Thiruvambady Temple. As the main nadai was closed we went around and prayed at the Ganapathy temple on the rear side. Then w 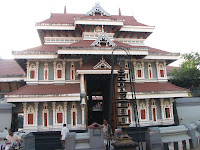 e entered the main Sreekoil to the beating of drums (chendai). After a while the golden doors were flung open and we witnessed deeparchanai. The main deity is that of Lord Krishna & Bhagavati besides him in the adjoining sanctum. Vinayakar stands opposite Bhagawathy.
The main attraction among the festivals of Thiruvambady temple is the world renowned Thrissur Pooram celebrated in the month of Medam { April-May}. The Pooram Festival is noted for the gorgeous parades of fully caparisoned elephants, percussion ensembles like Panchavadyam and dazzling fire works. The Divine Durbar on the ramparts of the Southern Gopuram of Vadakkunnathan temple, in the evening hours of the Pooram day when the 15 strong decorated elephants of Thiruvambady and Paramekkavu standing face to face in an ocean of humanity, when the silken parasols on elephants are changed minute after minute,creating a magnificent sight & unparallelled magical festive atmosphere.
Next we went to Vadakumnathar Temple to take a few shots - of the Moolasthanam & the main Gopura.
Then we went around to the Eastern side and entered the Paramekav 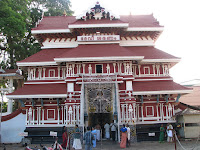 u Bhagawathy temple , which houses the biggest Devi Vigraha in Kerala.Thousands of years ago a mighty goddess resided under a tree that still stands (it is said) in what is now the compound of the Vaddakunathan temple. When Shiva’s devotees decided to enlarge his small shrine into a grand temple they moved the goddess, conceived of as his daughter, eastwards and down a slope to a temple of her own. She is there still, the Paramekkavu Devi. Her elder sister, the Thiruvambady Devi, resides in a temple a few furlongs to the north, the older incumbent of a temple now dedicated to Krishna. These sister goddesses are the main participants of the Trichur Pooram.
There is also a "mel kavu" inside the temple premises situated at an elevation & long crowds of men & women were standing in disciplined queues for doing archanai. The temple elephant a tusker was being readied for the seeveli that was to take place shortly. My request for taking photographs of the magnificent pachyderm in all his finery was turned down. As we come outside and walk towards the car park we see the Agrasala or large auditorium (tastefully built in typical Kerala style architecture) where various indigenous forms of dances are presented like kathakali, chakyar koothu etc.
at April 06, 2007 No comments: