The Annual Bosch AA MD meeting was held in Dubai in 2007. As promised, Bosch hosted the 2008 Conference in Cairo (Egypt) situated in North East part of the African continent and West of Jerusalem. Bosch teams from South took off from Chennai & Ba 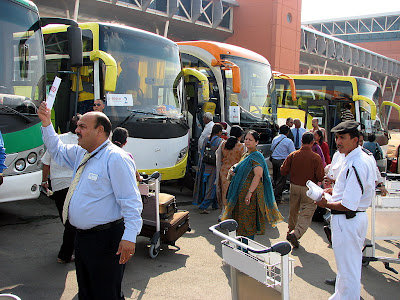 ngalore by Oman Air which was routed via Muscat. Flights from Mumbai & New Delhi were routed via Doha & Bahrain. Before departure all MD's were given Bosch branded Peter England shirts & Blue T-Shirts. The spouses received smart black leather hand bags. Bosch's gift hamper also included an attractive electronic photo frame with USB/Flash Drive connectivity
2 Nov'08: Our flight left Chennai around 7.00 am & landed in Cairo around 1.30 pm local time. Food aboard Oman Air can was quite ordinary though we were served "Hindu Vegetarian" as specified at the time of booking.
We were received at Cairo airport by the local agents of Tour operators carrying Bosch banners for identification. Passport control was quick & efficient at Cairo and after collecting our baggage we wheeled out through an underpas 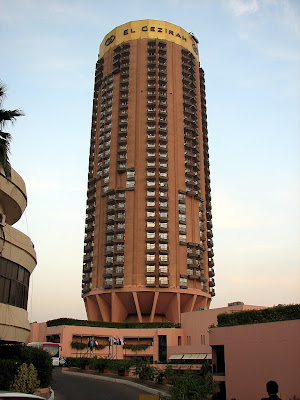 s to the waiting coaches and were transported to the Sofitel El Gezirah Hotel located 19 Kms from the airport. The elderly lady guide Ana bombarded us with all kinds of information about Egypt, its civilization, population, government,culture, industries, climate, currency, religion and a variety of other tit bits. At the Hotel we were received by the friendly and hospitable hotel staff & were served the customary welcome coffee/tea & cookies. This hotel located on the southern tip of the El Gezirah Island on the River Nile, is an exquisite resort within the city. The Nile is the longest river and has nurtured along its banks one of the oldest civilizations of the world surpsassed in antiquity only by the Indus Valley Civilization. The Nile is divided into two - while the White Nile rises in the Gr 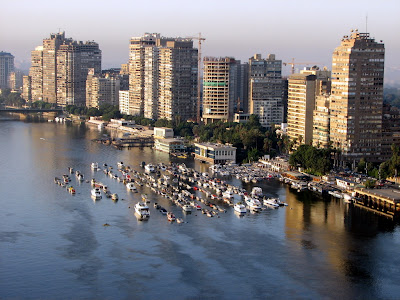 eat Lakes region of Central Africa, the Blue Nile has its origins in Ethiopia.
Located within walking distance from El Gezirah are the Opera House, the Egyptian Museum, the Cairo Tower. The hotel offers breathtaking views of the Nile, the Pyramids of Giza and the Cairo Citadel.
The panoramic and magnificent views of the Nile from the Hotel Room are best described in the phographs captured and shown here.
Dinner for the evening was aboard a stationary cruise boat named "Omar Khayyam" anchored on the banks of the Nile. It turned out to be a quiet & uneventful affair and there was neither alcohol nor any Egyptian dances on the menu as the name might imply.
Cairo by night is well illuninated and bustling with activity. The tall & slim Cairo Tower with soft illumination on the lattice exterior and colors continuously changing from Green to Purple to Red fires up your imagination. It has a revolving restaurant at the top which was the favorite dining spot of former President Gamel Abdel Nasser.
3 Nov'08: The day 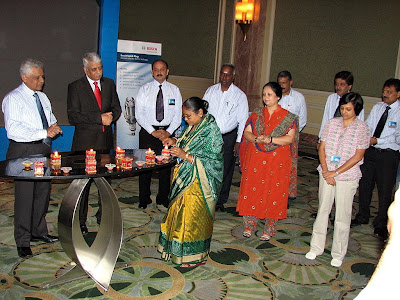 started with early breakfast at El Gezirah & then we transported to the Four Seasons Hotel, situated across from El Gezirah on the opposite bank of the Nile, for Day 1 of the Conference.The proceedings began with a crisp, well rearched & impressive presentation by Mr.V.Viswanathan, the suave & stylish MD of Bosch India, highlighting Bosch India's success story and the growing importance of the Indian operations in Bosch Worldwide. He also talked about the global recession, its impact on Indian economy and the hard road that lay ahead for all of us. This was followed by a power packed presentation by Mr. Ravi Krishnamoorthy, Regional Director-India & SAARC- AA, an electrifying video titled "Mission Im 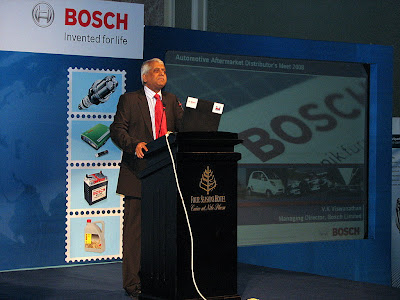 possible" and the commitment to continue the double digit growth initiative. There were also smart presentations on Advertising * Comunications and on Benchmarking Projects undertaken by the four Regional Managers. The Glittering Awards Ceremoney that followed as glamorous as any Bollywood event with Mr.Srinivasa playing the role of an MC efficiently & effectively. The ceremoney threw up many new Stars & Champions. Many of the erstwhile champions of yesteryears had been upstaged !
Lunch was served at a Four Seasons restaurant. The vegetarians had a tough time finding something to eat and most of them were seen making a scramble for fried rice, fruit salad (both were in short supply) or desserts. Yoghurt was not on the menu and this made matters difficult.
Meanwhile the spouses had been taken on a sight seeing tour of Cairo and they lunched at an Indian restaurant "The Kandahar" and from reports received it appears they all enjoyed fabulous Indian food. The detailed descriptions provided by one of the spouses was mouth watering!
After lunch, confer 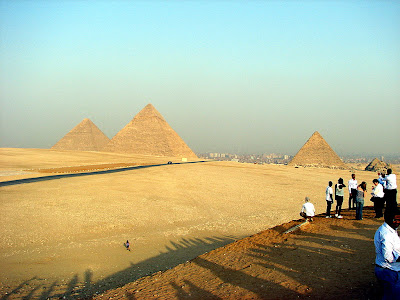 ence participants as well spouses were directly transferred to the Valley of Giza comprising the wonderful ancient monuments of architectural prowess representing ancient Egyptian civilization - three Pyramids and the Sphinx. The three largest pyramids were the Great Pyramid of Khufu, the Pyramid of Kafhre and the Pyramid of Menkaura. Each Pyramid is a tomb dedicated to a different king of Egypt. The Sphinx - built over 4000 years ago and representing the strength of the then King- stands up as a majestic & regal structure inspite of extensive erosion by wind & sand. It has a man's head and a lions body - 150 ft lo 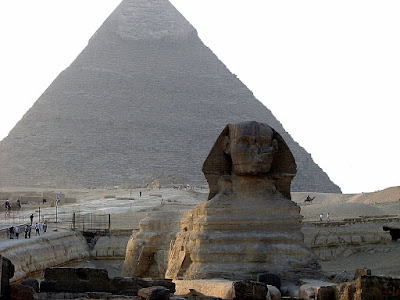 ng body, 50 ft long paws and head 30 ft x 14 ft. The visit transported us back in time several thousands of years to the period of Tutankhamen & Nefretiti and Cleopatra and the Pharoahs.
We returned to the hotel by 6.00 pm and after a bit of relaxation we departed around 9.00 pm for the night dinner cruise on the Nile Maxim. We enjoyed top-class service aboard the cruise, gliding past Cairo's illuminated skyline while we dined, with entertainment provided by a spectacular Belly-dancing and Tanoora folk dance. As we drifted along the Nile, the house band performed Western, Oriental and Arabic tunes. We returned a little fatigued & sleepy to El Gezirah past mid-night for a well deserved rest.
4 Nov'08: The MD's had a delayed transfer and hence were able to enjoy a relaxed breakfast. Some of us decided to smuggle yoghurt containers which came in handy during lunch. The MD's & spouses left simultaneously at 9.30 am - the spouses for the Museum tour & MD's for the Day 2 meeting at 4 Seasons. The morning meeting was brief - there were brainstorming sessions & presentations on how to increase the Diesel business. Then a brief address by yours truly to thank the Bosch Management for making wonderful & meticulous arrangements at Cairo. Mementoes in the form of Tanjore Plates were presented on behalf of Stanes Motor Parts Limited to Mr.Viswanathan & Mr.Ravi 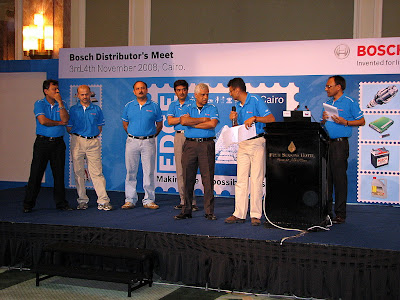 Krishnamoorthy. After a comprehensive concluding address by Mr.Viswanathan we all transferred for shopping to the Star City shopping mall. The spouses were already there after lunching once again at Kandahar. The mall was not the curio shoppers paradise that we were expecting - the items on display were more expensive than the malls in New York ! We contented ourselves with Cappucino & Mocha. 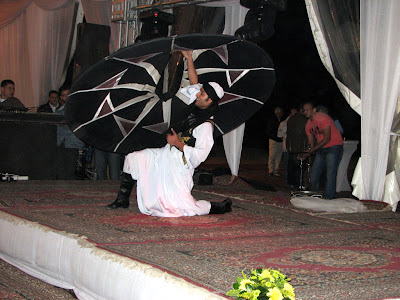 For night dinner we were transferred to the Valley of the Giza Pyramids. It is an exquisite Bedouin Dinner and we were greeted on arrival by a convoy of camels, a dancing horse and a group of Bedouin musicians and escorted to a tent where tables are neatly arranged. The pyramids were artificially illuminated and looked romantically eerie in the starlit night. The weather was breezy and cool. Some were smartly wearing cardigans or shawls. A few ventured out on camel rides in the darkness.
A young not sufficiently experienced MC made his appearance and attempted to 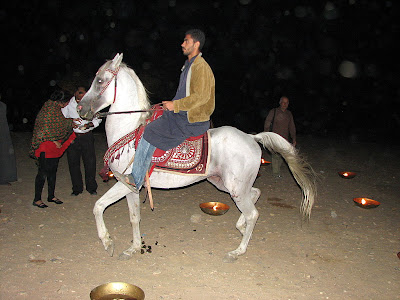 regale the crowd with his immature rhetorics. This is followed by a series of folk dances by young,beautiful, lissome, colorfully attired Arab maidens. A petite female Fillipino DJ made her appearance, jived and belted out Western tunes. The crowd was busy digging into the food and not sufficiently attracted to the dance floor barring a few veterans like Sham Sunder & Pritipal. Navaneetha Krishnan( SO Kerala) was conspicious by his complete absence from the dance floor - remember his exploits in Dubai ! 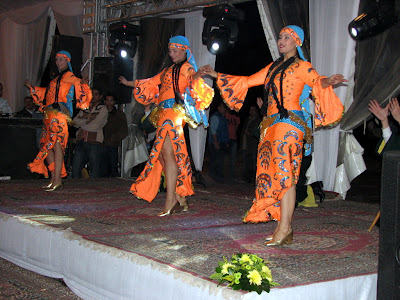 5 Nov'08: This is our final morning at Cairo and we checked out after breakfast. The coach took us back to Cairo airport. There is a nice curio shop at the Duty Free and we shopped to our heart's content - papyrus paintings, models of pyramids & sphinnx, key chains,bottle openers, painted ceramic mugs & glasses, coasters etc. We once again traveled by Oman Air via Muscat. This time the transit time at Muscat lasted over five hours. More shopping opportunities were presented at Muscat Duty Free - liquor,dates & chocolates were the favorites.
We reached Chennai at 6.00 am on 6 Nov'08. The Grand Conference Tour to Cairo was over.
For more photographs log on to web album : http://picasaweb.google.com/ramakrishnan49/CairoVisit#
For Belly Dance on Nile Cruise log onto :
http://www.youtube.com/watch?v=HRObvfbmteU
at November 09, 2008 3 comments: