24-12-2013 : Chidambaram Temple is a Hindu temple dedicated to Lord Shiva located in the heart of the temple town of Chidambaram,Tamil Nadu).The temple , 78 km south of Pondicherry and 235 Km from Chennai, the capital of Tamil Nadu. Chidambaram is one of the five holiest Shiva temples or Pancha Bhootha Sthalas, each representing one of the five natural elements; Chidambaram represents akasha (sky or space). The other four temples in this category are: Thiruvanaikaval Jambukeswara,Trichy (water), Kanchi Ekambareswara (earth)Kanchipuram, Thiruvannamalai Arunachaleswara (fire),Thiruvanna malai and Kalahasti Nathar (wind),Kalahasti
Temple
The temple complex spread over 50 acres in the heart of the city. It is an ancient and historic temple dedicated to Lord Shiva Nataraja and Lord Govindaraja Perumal, one of the few temples where both the Shaivite and Vaishnavite deities are enshrined in one place.To the followers of Shaivism (Saivism) or the Saivaite, the very word koil refers to Chidambaram.
Meaning of Chidambaram
The word Chidambaram may be derived from chit, meaning "consciousness", and ambaram, meaning "sky" (from aakasam or aakayam); it refers to the chidaakasam, the sky of consciousness, which is the ultimate aim one should attain according to all the Vedas and Scriptures.
Temple Story
The story of Chidambaram begins with the legend of Lord Shiva strolling into the Thillai Vanam (Vanam meaning forest and thillai trees - a species of mangrove trees - which currently grows in the Pichavaram wetlands near Chidambaram. The temple sculptures depicting the Thillai trees date back to the 2nd century CE).In the Thillai forests resided a group of saints or 'rishis' who believed in the supremacy of magic and that God can be controlled by rituals and 'mantras' or magical words. The Lord strolls in the forest with resplendent beauty and brilliance, assuming the form of 'Pitchatanadar', a simple mendicant seeking alms. He is followed by his Grace and consort who is Lord Vishnu as Mohini. The rishis and their wives are enchanted by the brilliance and the beauty of the handsome mendicant and his consort.On seeing their womenfolk enchanted, the rishis get enraged and invoke scores of 'serpents' (Sanskrit: Nāga) by performing magical rituals. The Lord as the mendicant lifts the serpents and dons them as ornaments on his matted locks, neck and waist. Further enraged, the rishis invoke a fierce tiger, which the Lord skins and dons as a shawl around his waist.Thoroughly frustrated, the rishis gather all their spiritual strength and invoke a powerful demon Muyalakan - a symbol of complete arrogance and ignorance. The Lord wearing a gentle smile, steps on the demon's back, immobilizes him and performs the Ánanda Thaandava (the dance of eternal bliss) and discloses his true form. The rishis surrender, realizing that this Lord is the truth and he is beyond magic and rituals.
The Ananda Tandava Posture
The Ananda Tandava posture of Lord Shiva is one of the famous postures recognized around the world by many. This celestial dancing posture tells us how a Bharatha Natiyam Dancer should dance.
The demon under Nataraja's feet signifies that ignorance is under his feet. The Fire in this hand (power of destruction) means destroyer of evil. The raised hand signifies that he is the savior of all life. The Ring at the back signifies the cosmos. The drum in his hand signifies the origin of Life.
The Dikshitars or Hereditary Priests: The temple is managed and administered hereditarily by the Chidambaram Dikshitar – a class of Vaideeka Brahmins whom, legends say, were brought here, from Mt. Kailas, by Saint Patanjali, specifically for the performance of the daily rituals and maintenance of the Chidambaram temple.
These Deekshithars follow the Vedic rituals, unlike the Sivachariyars or Adhisaivars – who follow the agamic rituals for the worship of Lord Shiva. The rituals for the temple were collated from the Vedas and set by Patanjali, who is said to have inducted the Deekshithars into the worship of Lord Shiva as Nataraja.
The Chidambaram Mahatmyam recounts of their arrival in Tillai just as Lord Nataraja started his dance there. Thus they were the chosen guardians of the Lord’s worship and of the temple from its very conception.
Their relation to Lord Nataraja is a very intimate and powerful one, which is expressed by the legend that once the 3000 were requested by Brahma to perform a Vedic sacrifice in heaven. At their return they counted to make sure all had returned safely. But however they counted, they found only 2999. All were very upset, until a voice from the Sabha called out and announced that He Himself, Lord Nataraja, was the 3000th Deekshithar. Today they number around 360.
( The writeup is compiled from the web)
Here are some pictures clicked at the Temple: 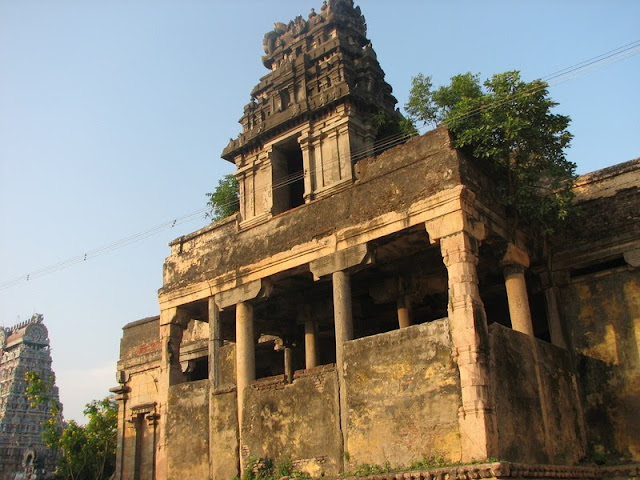 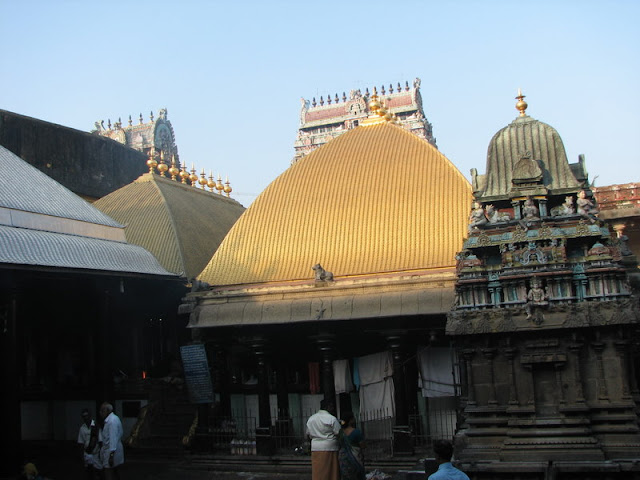 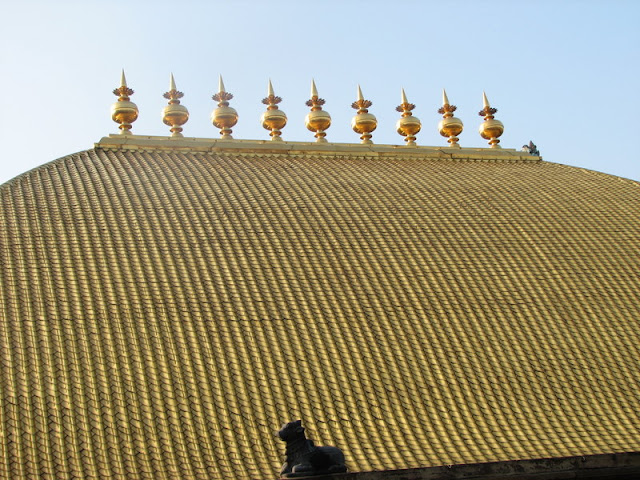 My grand daughter Mira lives in Boise, Idaho.She recently attended summer camp during her vacation. As part of the camp she had to milk a cow & feed a bull ! Amazing experience for a 7 year old ! I believe these are essential skills for all Idahoans :) 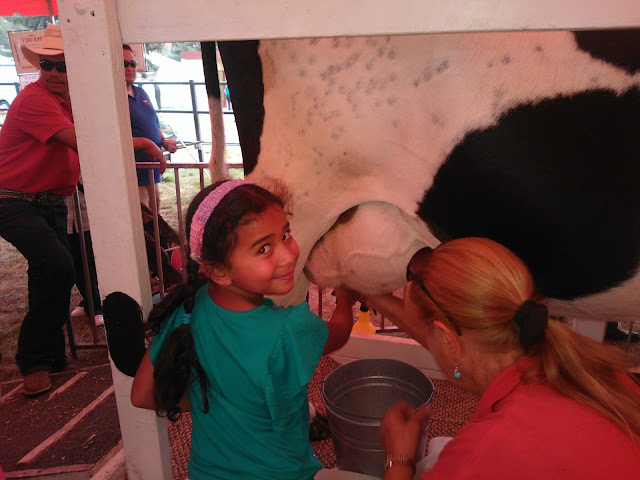 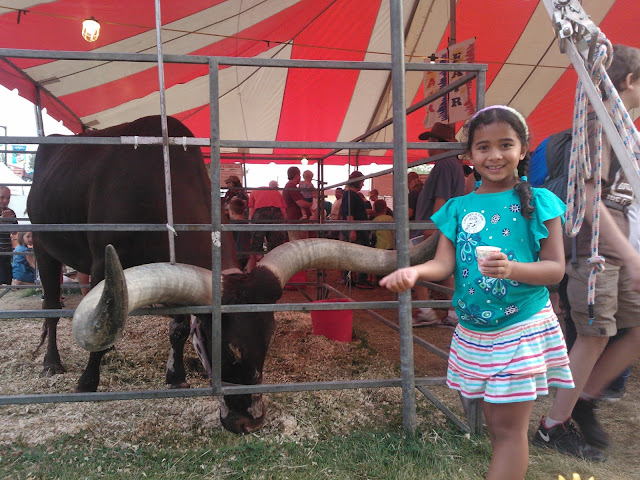 I visited Chidambaram Temple in December 2012.While circumambulating the outer prakaram I came across a group of young priests who were into deep discussions among themselves. On my request they enthusiastically agreed to pose for a photograph.The picture is posted below: 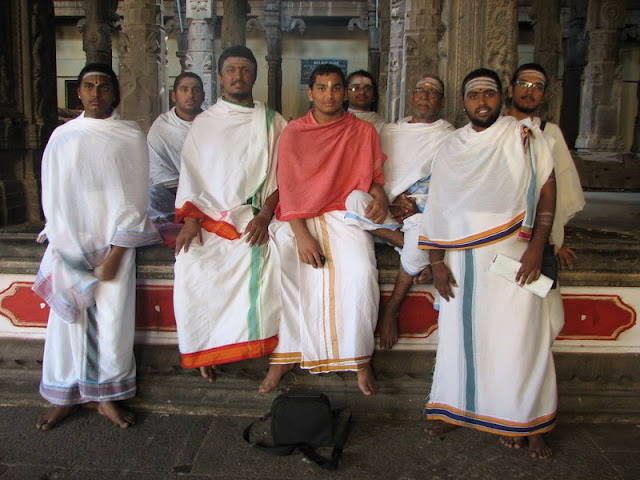 December 2012: After GKC ( Gangaikondacholapuram) our next stop was Tirukkadambur or Melakadambur around 32 Kms from Chidambaram.This is a Siva Temple and also a Padal Petra Sthalam where Sambandhar & Tirunavukarasar have sung hymns in praise of Lord. The deity goes by the name of Amritakadesar - Devendran or Indra: Lord of the Heavens is believed to have worshipped Siva here to get Amirtham or Celestial Nectar.The sanctum sanctorum of this temple is sculpted to look like a chariot with wheels and horses. This temple constructed during the reign of Cholas by Kulothunga Chola. The temple and the village are well known in Ponniyin Selvan history, as they are over than 1,000 years old.  This Sivalinga is Self-manifested or Swayambhu linga.
During the 3rd, 4th, 5th day of the Tamil month of Panguni, twelfth month of Tamil Calendar, early during sunrise at 6.15 am, the Sun's rays will fall on Lord Amirthakateshwara Lingam for about fifteen minutes. At that time special pooja's are offered to the Lord. The shrine Goddess Jothiminnammai appears as Kalaimagal in Morning and Thirumagal in Evening and Malaimagal in Night. 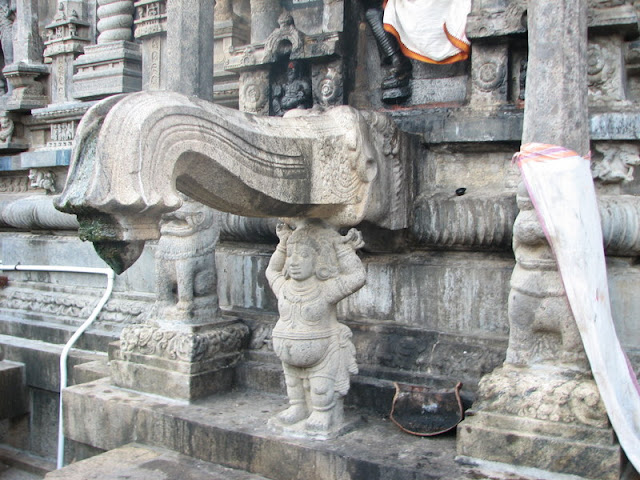 Gangaikonda Cholapuram( around 100 Kms from Trichy, via Ariyalur in Tamilnadu) was erected as the capital of the Cholas  by Rajendra Chola I, the son and successor of  Raja Raja Chola, the great Chola who conquered a large area in South India, Sri Lanka, Bangladesh, Sumatra, Kadaram (Kedah in Malyasia) at the beginning of the 11th century A.D. It occupies an important place in the history of India. As the capital of the Cholas from about 1025 A.D. for about 250 years, the city controlled the affairs of entire southern India, from the Tungabhadra in the north to Ceylon(now renamed Sri Lanka)  in the south and other south east Asian countries. The great temple of Siva at this place is next only to the Brihadeeswara Temple at Thanjavur (in Tamilnadu) in its monumental nature and surpasses it in sculptural quality. The Gangaikondaan temple is an architectural and engineering marvel because the shadow of the main tower never falls on the ground throughout the year. Here are some pics taken during my visit in December 2012. 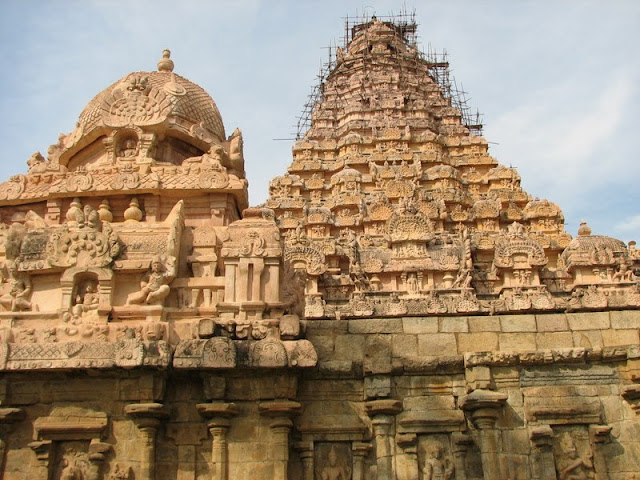 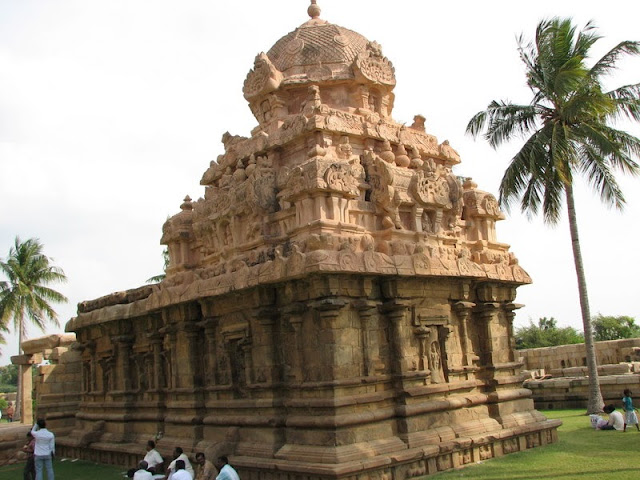 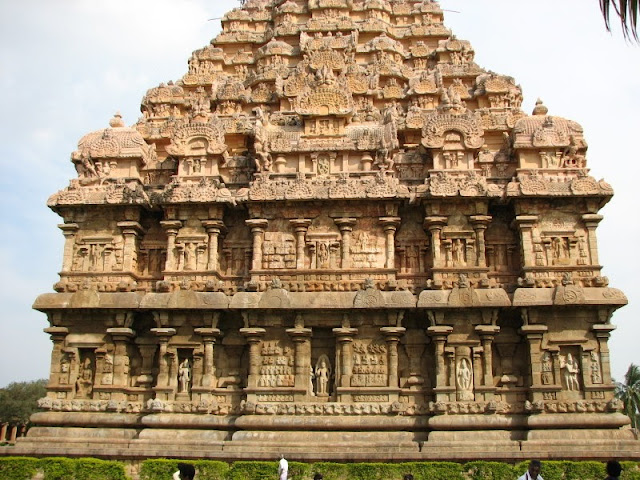 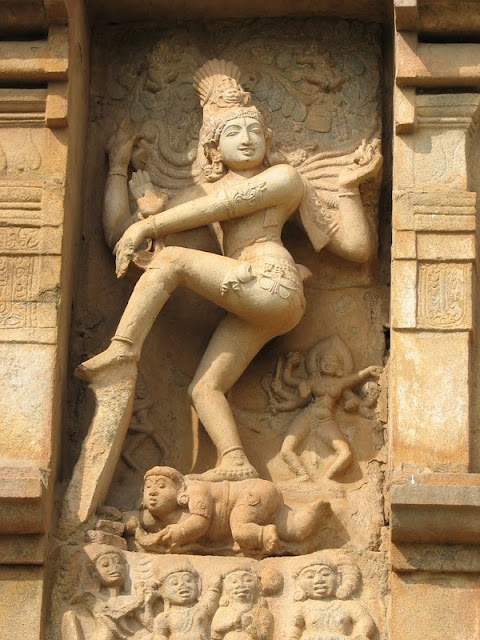 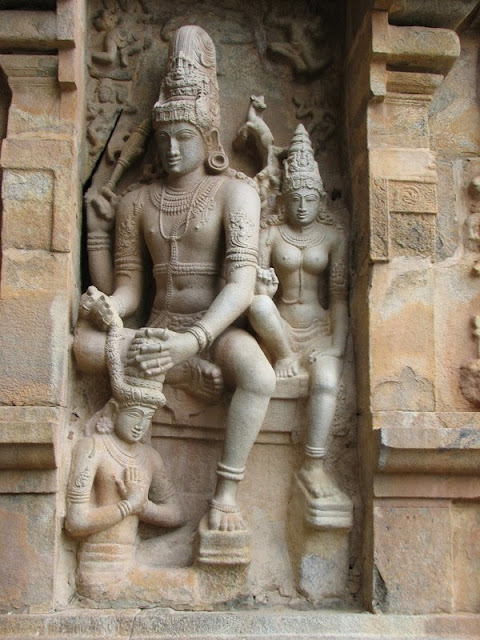 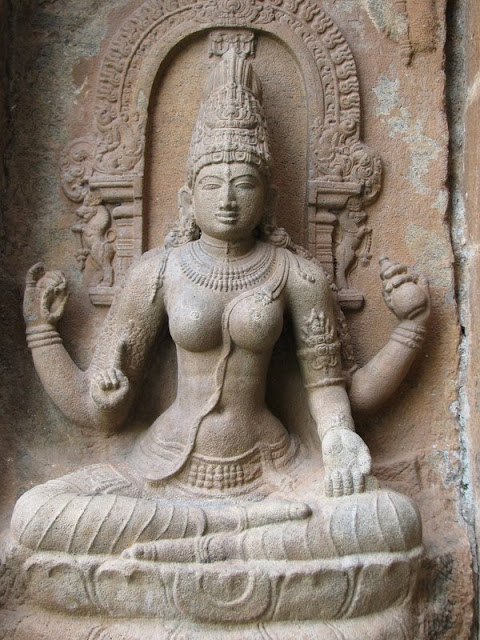