22-1-2014: Mahalingeswarar Temple in Tiruvidaimarudur is a 2000 year old Shiva temple.It is one of the 275 sthalams where the three of the most revered Saivite Saints Appar, Sundarar and Tirugnanasambandhar have glorified the temple with their hymns. The temple was built during the Chola period and widely expanded during the Nayak period in the late 16th century. There is a separate sanctum to Goddess Brihatsundarakuchambikai.
Legend: The name "Kumbakonam" is believed to be an allusion to the mythical pot (kumbham)of the Hindu God Brahma that contained the seed of all living beings on earth. The kumbha is believed to have been displaced by a Pralaya(huge flood that led to the dissolution of the universe) and ultimately came to rest at the spot where the town of Kumbha-konam now stands.The drops of nectar believed to have fallen in five shrines around Kumbakonam, namely Mahalingeswarar temple at Tiruvidaimarudur, Tirudharasuram, Tirunageswaram,Tiruvorgam and Tirupadalavanam.
Another legend is that of  a Chola prince who killed a Brahmin and was in turn, pursued by his spirit (brahmahatthi) The Chola prince entered the Mahalingeswarar Temple and prayed to Siva for relief from the clutches of the brahmahatthi. The Chola prince made his way out through another entrance thereby saving himself. This practice continues till day where people take the second entrance to exit the premises after worship. There is a sculpture of Chola brahmahatthi on the eastern premises in one of the inner gopurams. 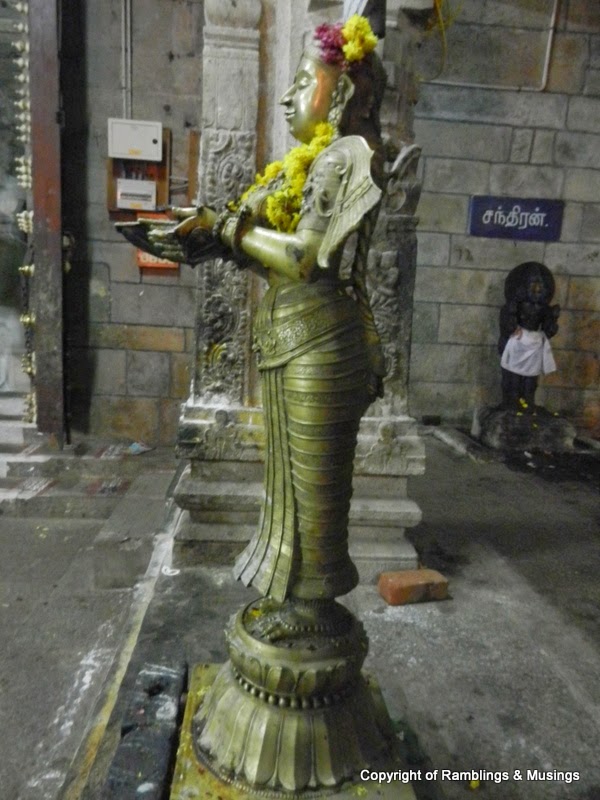 The Kampahareswarar Temple at Tirubhuvanam near Kumbhakonam is the last in the series of four Chola masterpieces along with Brihadeeswara Temple, Gangaikondacholapuram & Darasuram. The front mandapam here is again built in the form of a huge chariot. The Vimanam here is larger than that of Darasuram, and is about 120 feet in height. Sculptured panels depicting scenes from the Ramayana adorn this temple.Shiva is worshiped as "Kampaheswarar" as he removed the quaking (Kampa) of a king who was being haunted by a Brahmarakshasa .
There is a separate shrine for Sarabeswarar a fusion of man, eagle and lion - the deity is believed to have relieved the devas (celestial deities) from the fury of Narasimha after he slayed Hiranyakasibu the demon. A sculpture of Sharbeshwaramurti in the Tribhuvanam temple is seen with three legs, with body and face of a lion and a tail. It has four human arms, the right upper hand holds axe, noose is held in the lower right hand, the deer in the upper left hand and fire in the lower left hand. 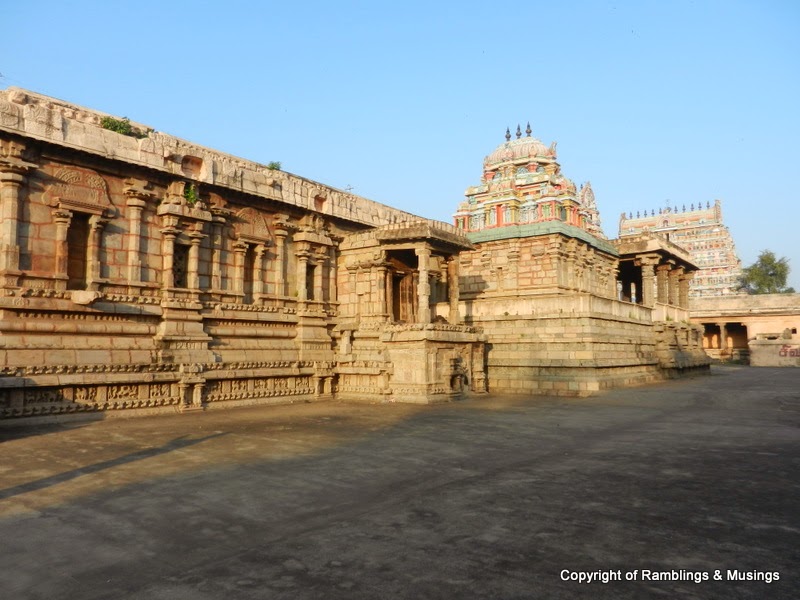 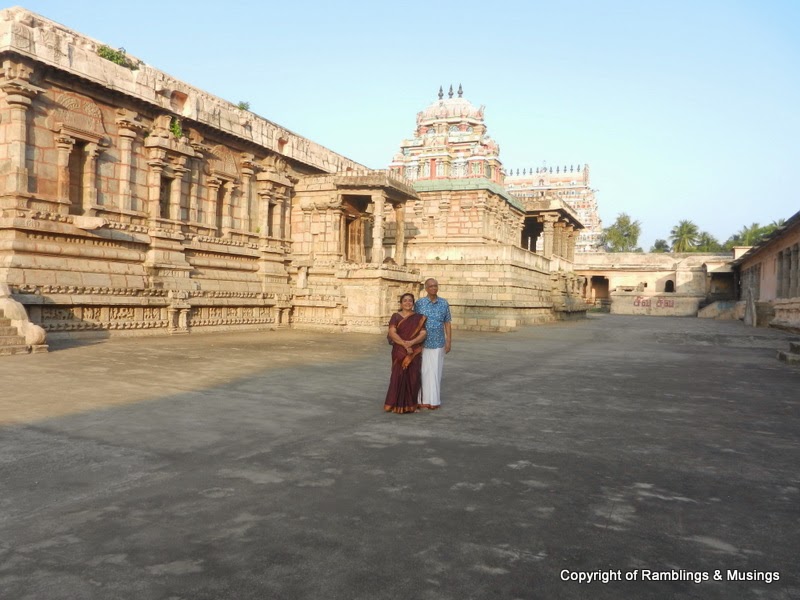 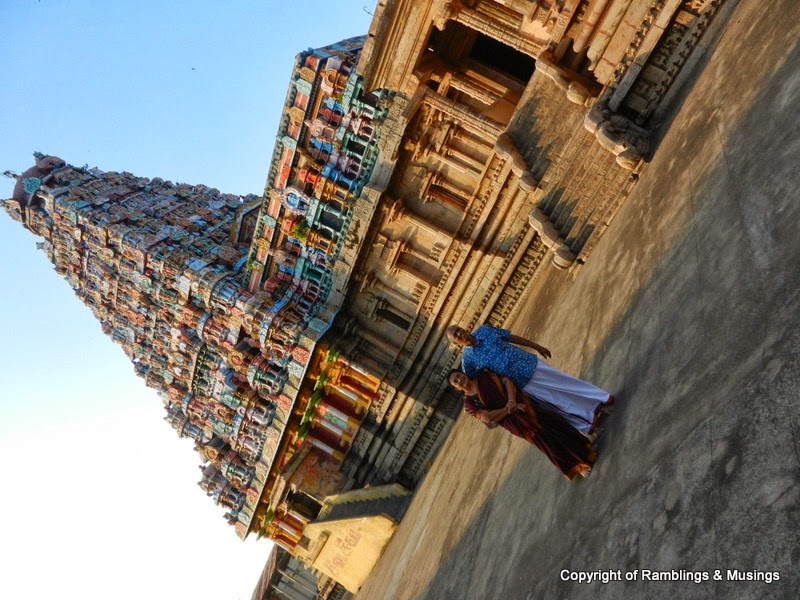 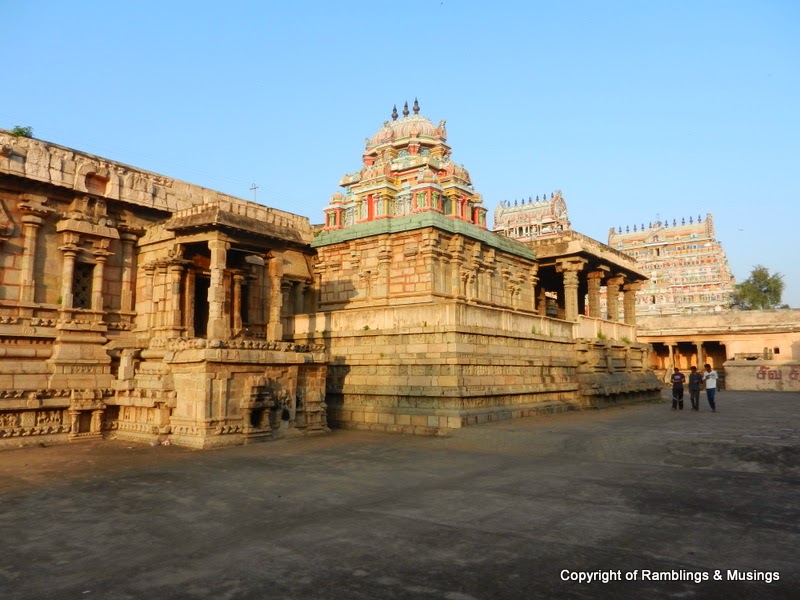 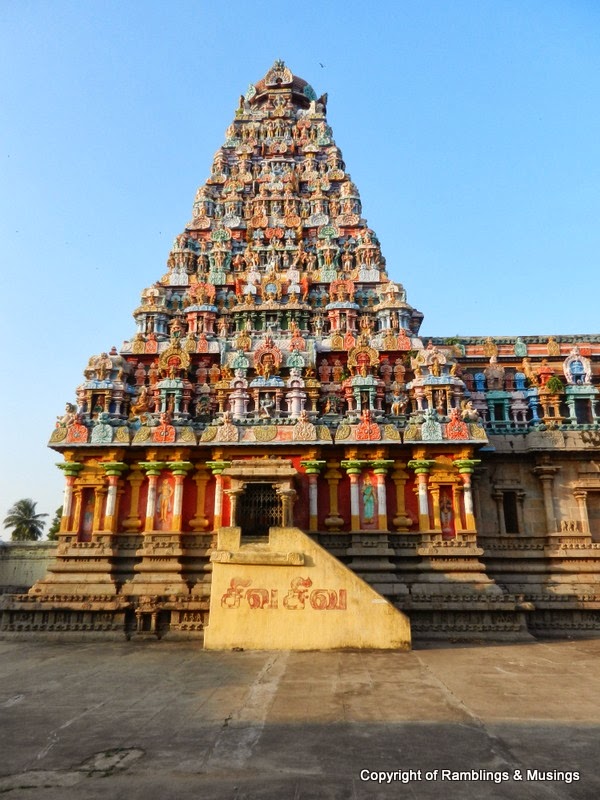 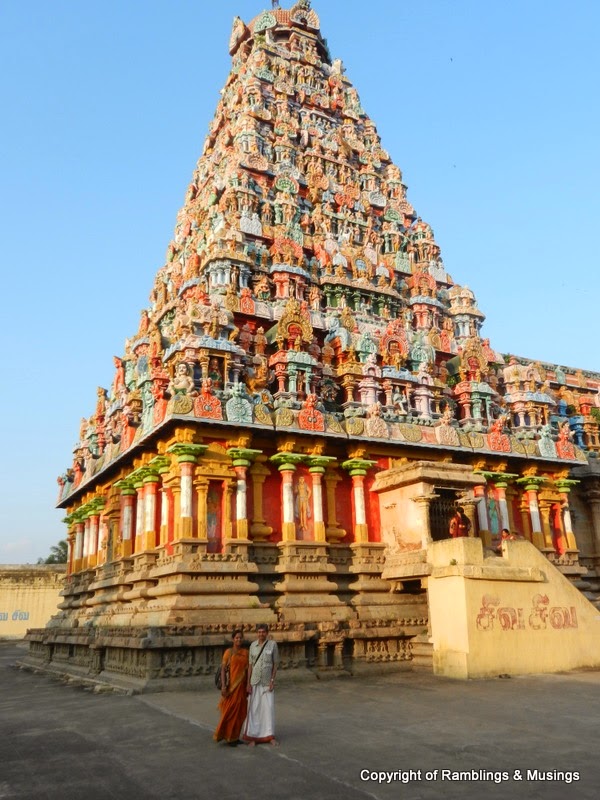 22-1-2014: Pullamangai is located on the outskirts of Pasupathi Koil, Papanasam Taluk, Thanjavore District, Tamilnadu, South India. It is easily accessible by vehicles from Thanjavore and Kumbakonam.
The Chola temple is located on the western corner of the main street here.Going by the inscriptions and other archeological evidences,this temple might have been built during the early years of Chola king Parantaka Choladeva-I (907-953 AD). This is a Thevara sthalam and Saint Gnanasambandar has sung hymns of Lord Siva here.This temple is located in the banks of Kudamuruti River. Since this temple's Sthala Vriksham is “Ala Maram” ( Banyan Tree) hence it is also referred to as “Alandhurai”.Also there is a legend that Parvati is said to have taken the form of a Chakravaha bird and worshiped Shiva here, hence the name Pullamangai.(pulla means bird).
The temple is in a state of complete neglect. There is growth of wild weeds and plants on the precious vimanam which is full of exquisite sculptures.Government needs to take some fast action to prevent further deterioration and restore the temple to good shape. Otherwise this precious and priceless jewel of a temple will be lost soon !(The matter has since been reported to Archeological Survey of India and positive action is expected soon) 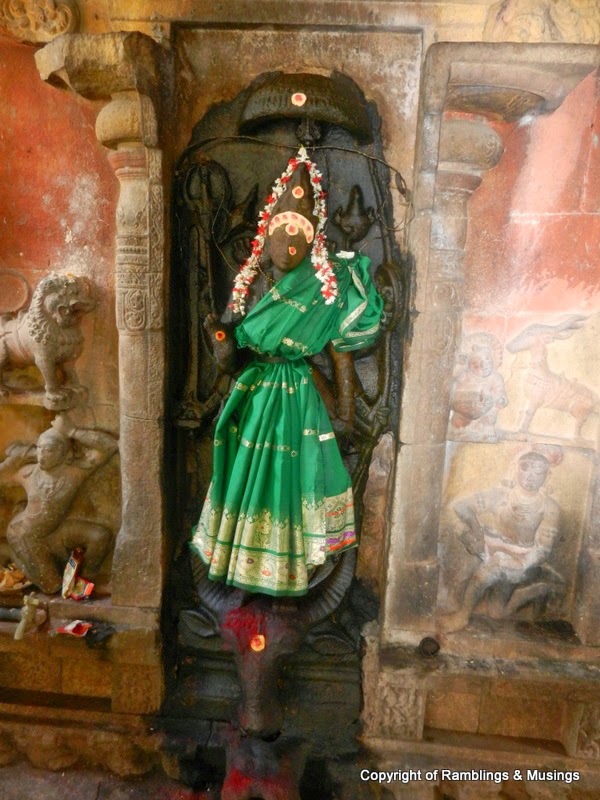 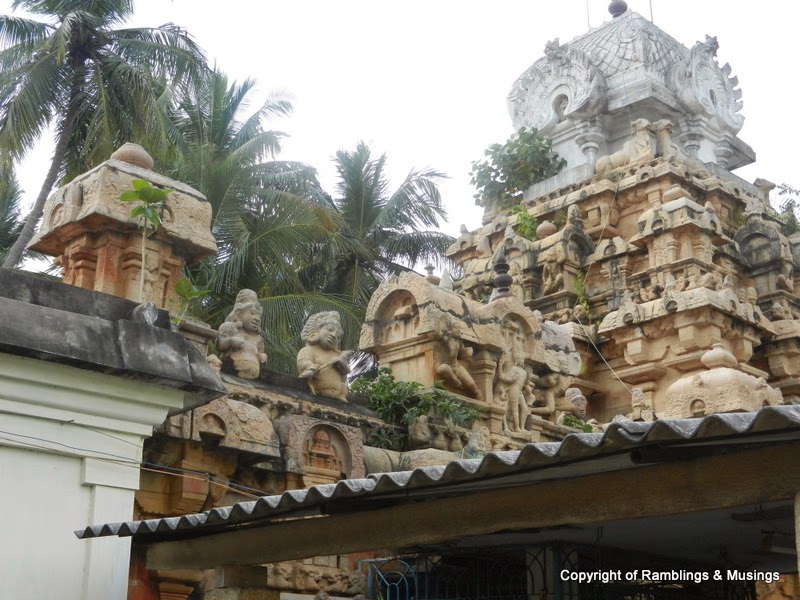 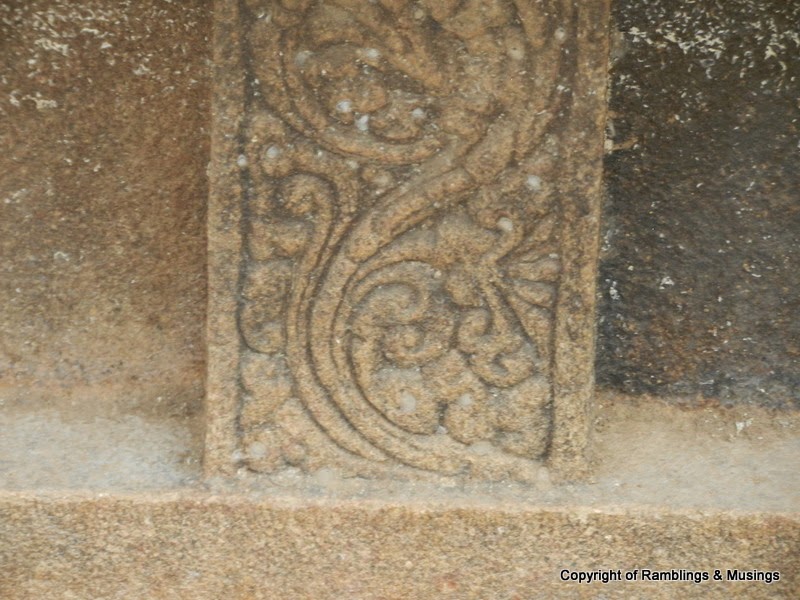 22-3-2014: We motored towards Pullamangai located around 5 Kms from Kumbakonam to see the Tiruvalanthurai Mahadevar Temple. We reached around 9.30 am but the priest had not arrived. We had to wait for nearly one hour for him. Meanwhile we stretched our limbs and meandered around for a while. We befriended the village kids and took a few pictures.They looked happy and healthy. We asked them if they went to school and they said no.That was sad to learn. We were given to understand that in a nearby house a family owned two looms and produced Kanchivaram pattu (silk) saris.When we evinced interest we were invited to see the saris. We had a nice interaction with the village folk and saw a nice collection of beautifully woven saris. By this time the temple priest had arrived and opened the temple doors. We bid good bye to the kids. It was a beautiful experience: 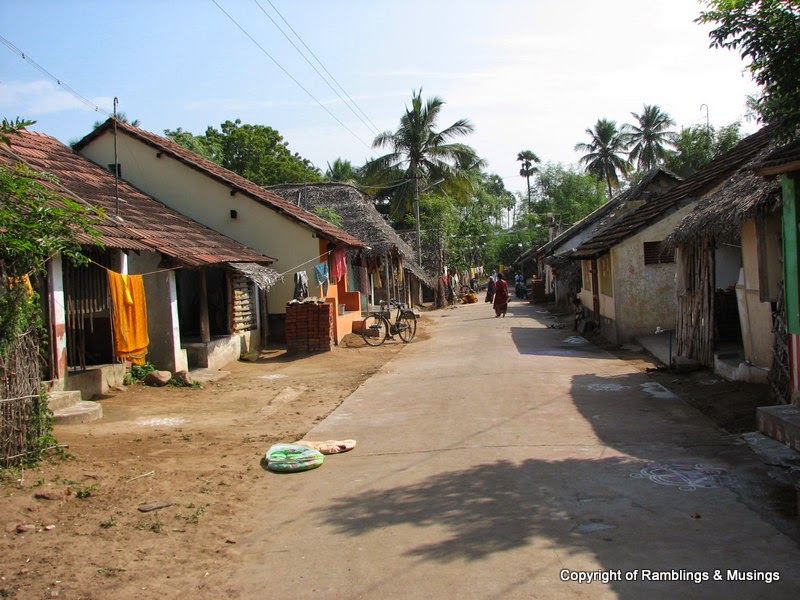 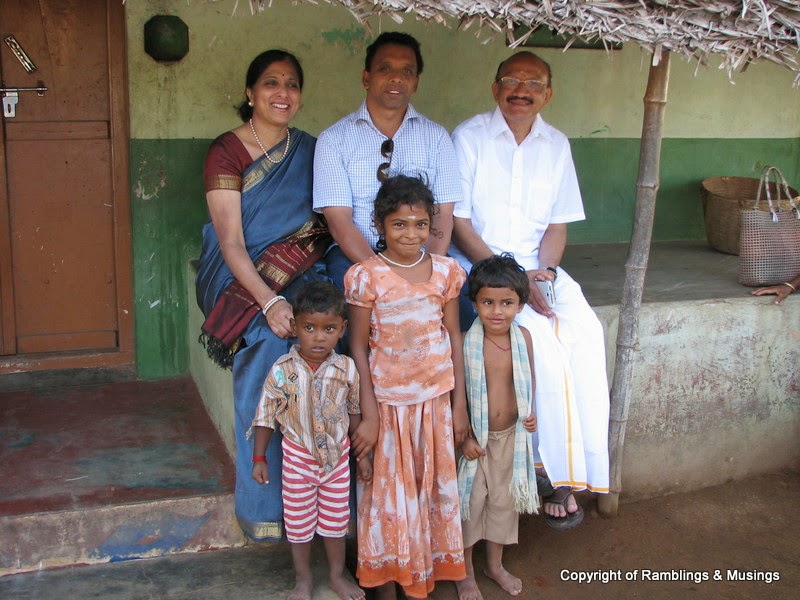 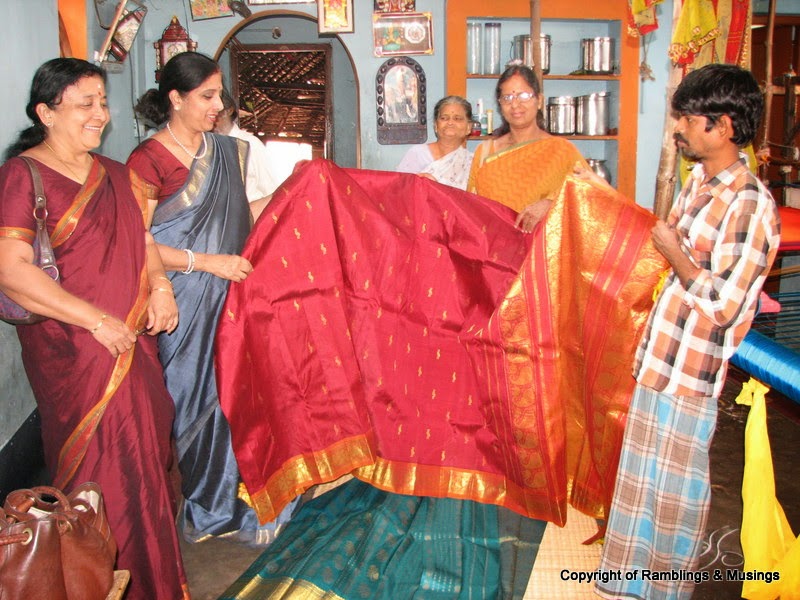 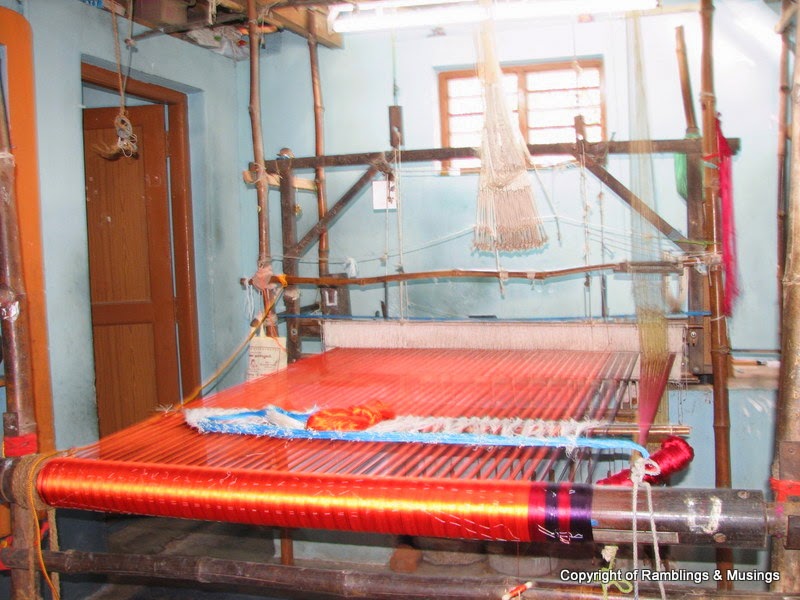 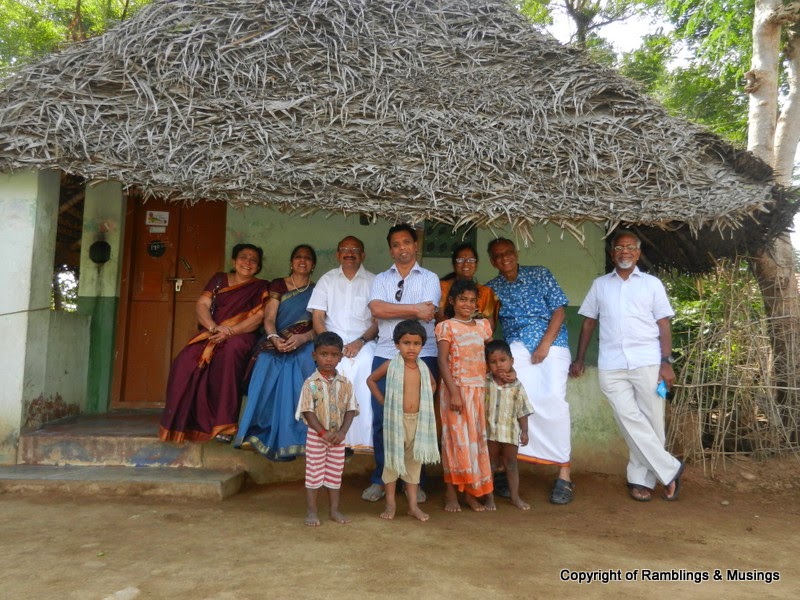 22-1-2014: We got up early showered had coffee and visited the nearby Someswarar Temple. It was so early that even the priest had not arrived and the doors to the main sanctums were locked. While we peeped through the iron bars to get a darshan of the deities the priest arrived and unlocked the doors.
Kumbakonam is a temple town with many Hindu Temples located in and around it. Majority of the temples are dedicated to Lord Vishnu and Lord Shiva. Someswara Temple is a Shiva Temple around 1000-2000 years old. The Goddess is known as Thenar Mozhial Somasundari.This is a Thevara Sthalam and Saint Tirugnana Sambandar has sung hymns in praise of the Lord here.The Shiva Lingam is Swambhu or self formed.
Temple Legend: Lord Brahma was much annoyed when the great flood or Pralayam took place and was in a dilemma as to from where he had to begin creation again.  He surrendered to Lord Shiva for guidance.  Lord Shiva said, “Gather sand from as many holy places as possible and mix it with nectar and make a Mayakumbam-pot.  Fill this pot with nectar and keep the creation seed "Srushti Beeja".  Place a coconut on the pot and decorate with mango leaves.  Cover the pot with threads.  Keep it on an Uri or pot holder so that it does not fall on sides.  This pot would float on the Pralayam or great flood.  I will come there.”
Kumba the pot fell from the Uri and floated in the pralayam. A Lingam appeared at the place.  Moon(Soma) worshiped the Lord here, hence, Lord is praised as Someswarar.

On day 3 of our trip we left Thanjavur for Kumbakonam by the 3.30 passenger train. The train was crowded. Though we did not have any reserved seats we managed to edge ourselves into some seating space. The journey lasted around one hour. We were picked up at Kumbakonam by a Toyota Innova and driven to Udayalur Agraharam (village) where we were scheduled to spend the night.at Chandras newly acquired heritage house. It was a beautiful village and simple house with bare essentials. Renovation was under way and many basic facilities had not yet been created. Water had to be drawn from an open well and toilets were outside in the back yard. There were no fans and there were mosquitoes flying around. Since facility was inadequate we did not stay there but went off to Kumbakonam and checked into Hotel Atithi.