Also known as The Descent of the Ganges. There are two legends associated with this relief which was created to celebrate the victory of Narasimhavarman I over Pulakesan II. This great victory also earned the king the epithet "Mamallan' or great warrior.The architectural creations at Mamallapuram adopted stone as the medium for sculpting in situ rock faces. The relief is created with great skill and imagination on two large boulders of pink granite in the open air. The natural cleft, a very large perpendicular fissure, is adroitly sculpted between the boulders and forms an integral part of the mythical narratives carved on the entire rock face. A water tank was once located at the top of the rock denoting the Ganges river. It cascaded over the cleft and the relief to give an impression that the water was descending from Shiva's head.The sculptures carved in the natural fissure that divides the cliff not only depicts the cosmic event of Ganga descending to earth, but also depicts scores of gods, goddesses and mythical figures of Kinnaras, Gandharvas, Apsaras, Ganas & Nagas as also many wild and domestic animals all admiringly watching the great cosmic event..
As per one legend the waters of the Ganga descended to earth due to penance of Bhagiratha. You can see an skinny ascetic doing penance. As per another legend the ascetic is none other than Arjuna doing austere tapasya to Lord Siva in order to receive Shiva's most powerful weapon the Pasupatastra. 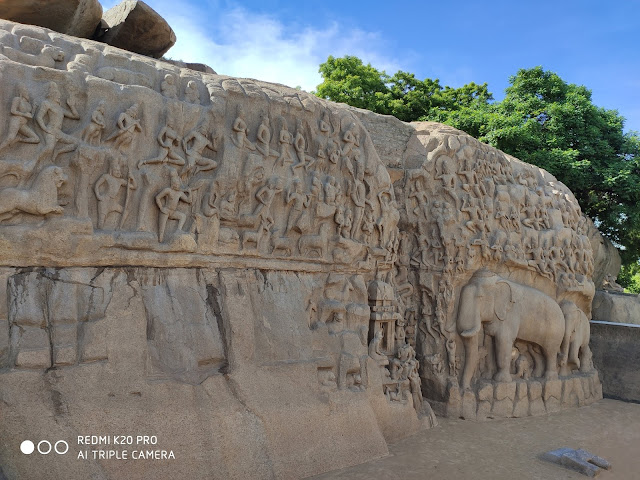 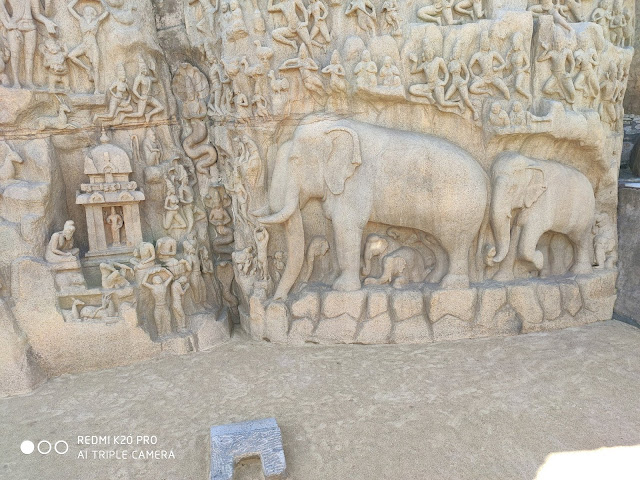 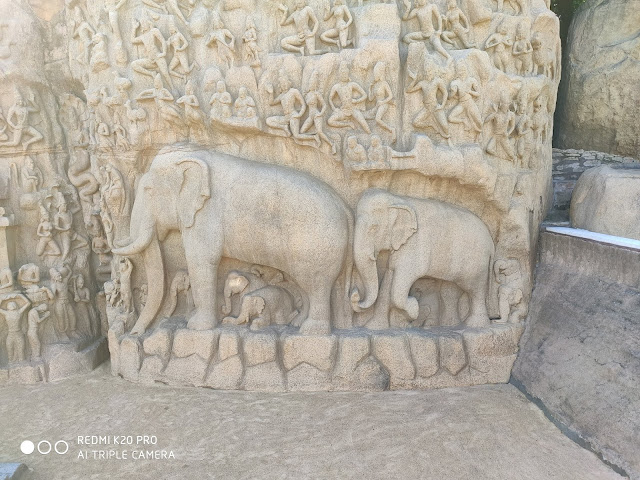 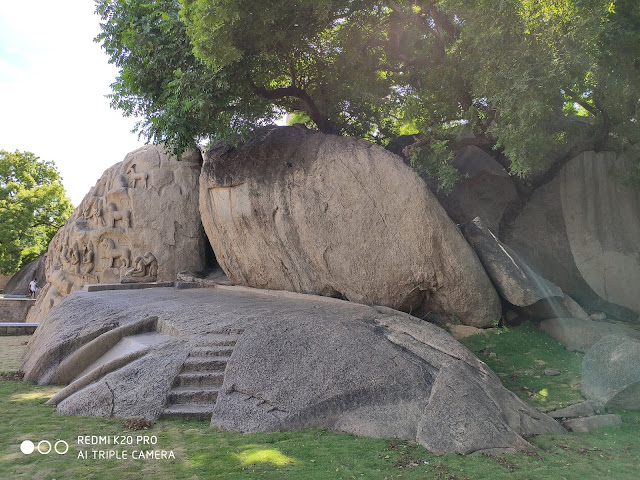 From Pancha Rathas site we drove past the Lighthouse to the site of the Krishna Mandapa. This monument is in fact a series of bas reliefs of the Pallava period depicting Lord Krishna lifting the mount Govardhana. A structural mandapam has been added in the front during the 16th Century AD. The primary scene depicts Krishna lifting the mountain to protect the cowherds and gopikas from the thunderstorm created by Indra.The Gopika is holding a slew of pots & a bundle of fodder, the wood cutter carrying an axe, a cow being milked and all animals displaying a sense of calmness quite oblivious of the storm around them. Krishna ensures that life around is unaffected and goes on as normal. Adjacent to the Krishna Mandapam there is an unfinished rock cut temple with a Garbha Graha but without idols or any form of sculpture or bas reliefs. We took the opportunity of clicking some selfies here. Yours truly can be seen in of the pictures emulating Lord Krishna lifting up the Govardhana :)
The Lighthouse:The first light was commissioned in 1887. The lighthouse erected as a circular masonry tower made of natural stone became fully functional in 1904. India's oldest lighthouse built around 640 AD by Mahendra Pallava stands next to this modern structure. It is a protected monument and is maintained by the Archaelogical Survey of India. 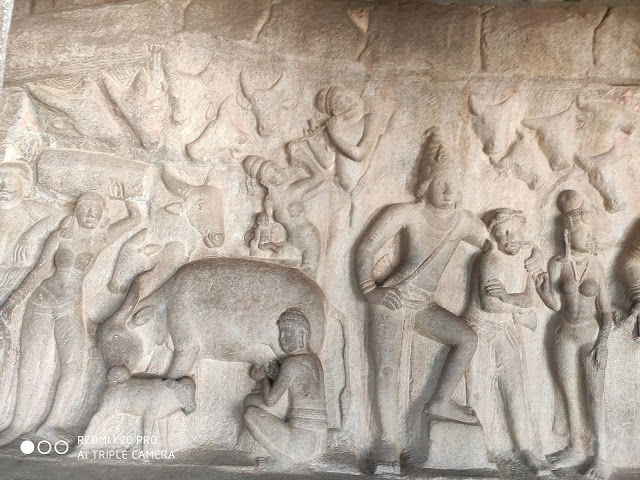 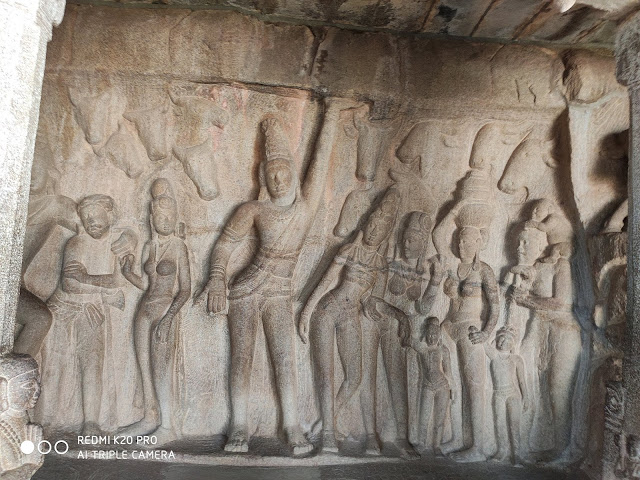 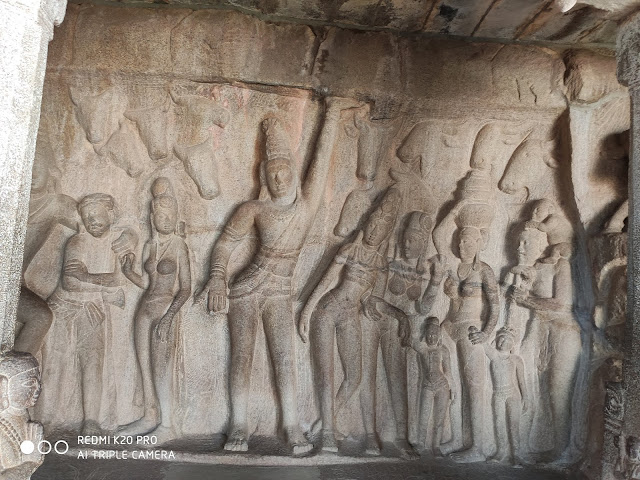 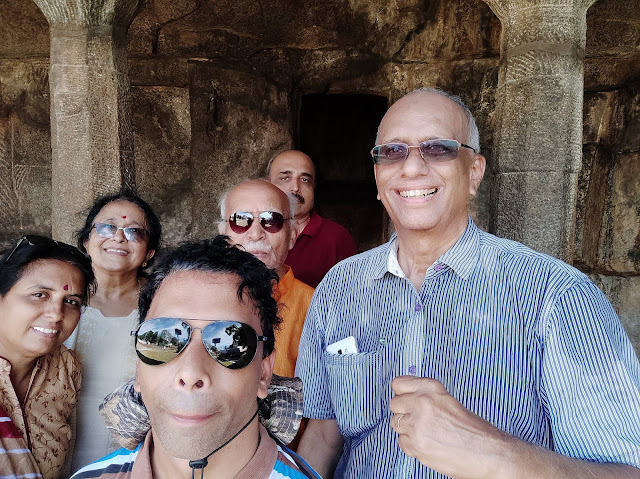 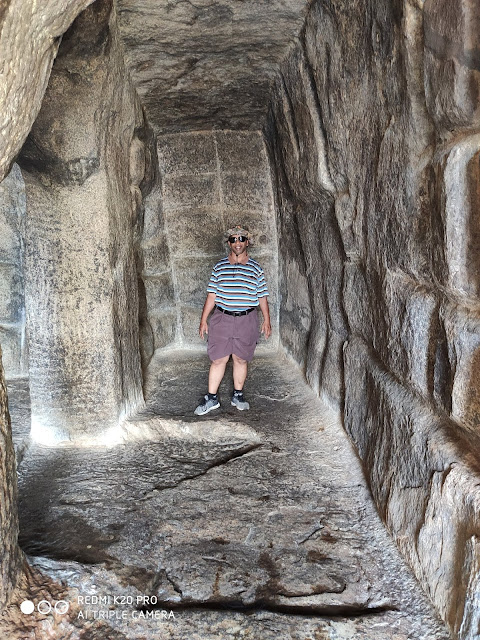 18 October 2019: Arrived at Chennai from Coimbatore by Cheran Express. From Central Station lugged our strollers across towards the underground Chennai Metro, bought tickets and boarded the train towards Meenambakkam. This is my maiden ride in Chennai Metro and the journey was exhilarating. Reminded me of Singapore Metro in which I had traveled extensively in 2018. Crossed familiar stations like Government Estate,LIC, Thousand lights, Nandanam, Saidapet,Guindy, St.Thomas Mount & Nanganallur Rd before alighting at Meenambakam. The ride was completed in 30 minutes and cost me Rs.50/-At Meenambakam booked an Uber ride and took the cab to Keelkattalai where my nephew lives in a nice compact, convenient and pleasingly furnished house. We started the day with two cups of invigorating piping hot decoction coffee. Then a refreshing bath followed by early lunch. Next we proceeded to Mahabalipuram accompanied by my nephews family in his newly acquired Maruti Suzuki Ertiga - a very roomy, luxurious and comfortable MUV with air conditioning at both front and rear. There were traffic snarls for while until we hit the ECR road after which it was a smooth uninterrupted drive upto Mahabalipuram or Mamallapuram an ancient port town 58 kms from Chennai on the Coromandel Coast of the Bay of Bengal. This ancient town dates back to the 7th Century AD when it was founded by Pallava King Narasimhavarman I. It is known for its intricately carved cave temples, sculptures & brilliant bas reliefs. We landed at this historical location immediately after the conclusion of an important summit held here between Indian & Chinese Heads of State. The town was amazingly clean and we enjoyed bright sunshine.
The first group of monuments we visited was the Pancha Rathas or Pandava Rathas (Ratha means Chariot) - a fine example of monolithic rock cut architecture. The five ratha styled temples are named Dharmaraja Ratha, Arjuna Ratha, Bhima Ratha, Nakula-Sahadeva Ratha & Draupadi Ratha. There are also life size sculptures of an elephant & a lion and a bull (Nandi).The Europeans referred to this as the seven pagodas based on the seven pinnacles atop the temples.This entire complex has been declared a World Heritage Site. Entrance fee per person is Rs.35.00
Revisiting these monuments after a gap of several decades. A memorable visit capped by some excellent pictures largely due a beast of a camera: Redme K20 Pro and a brand new selfie stick. 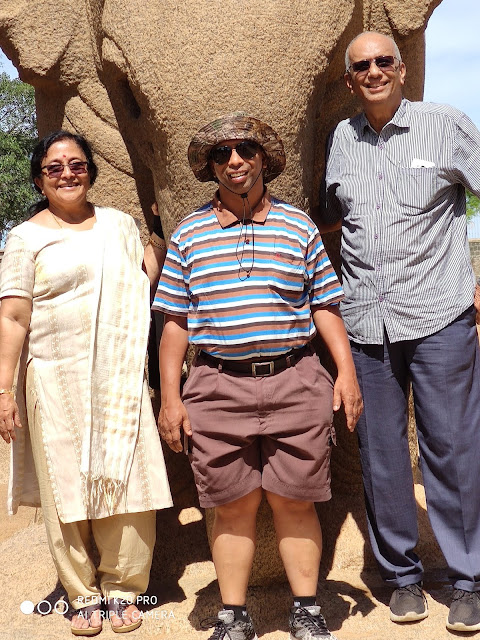 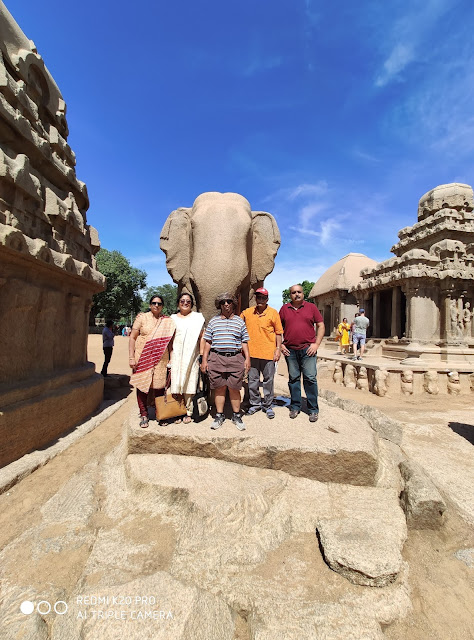 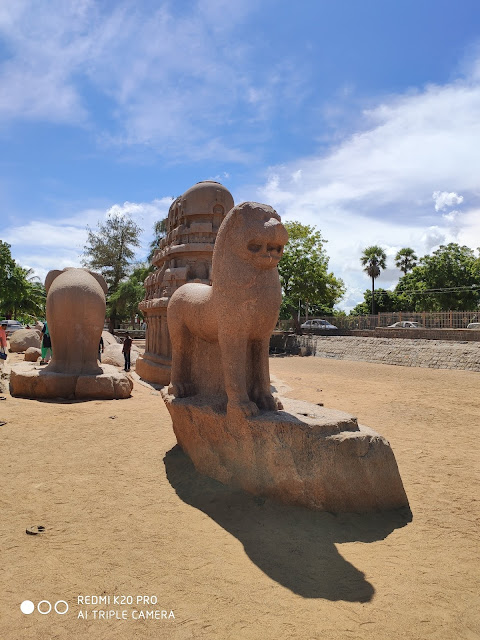 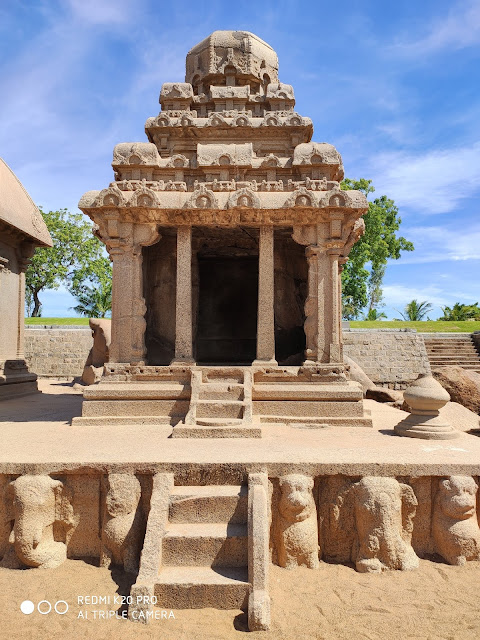 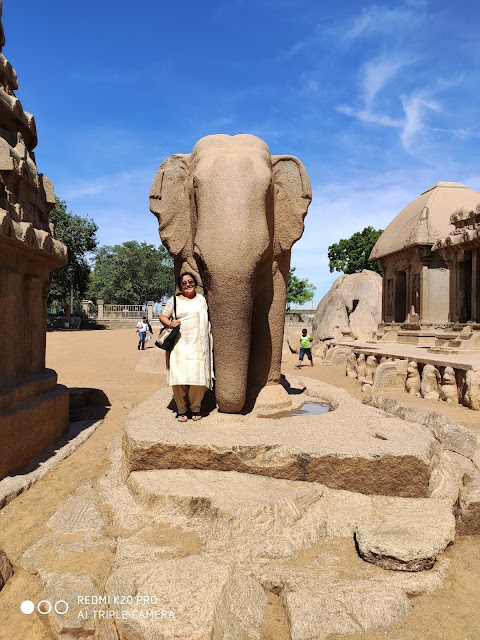 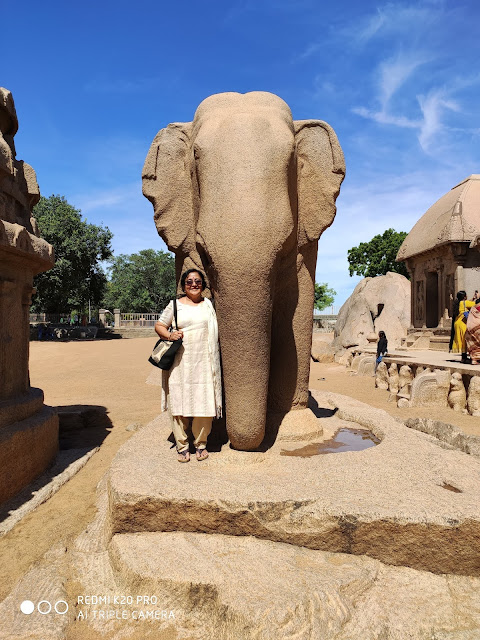 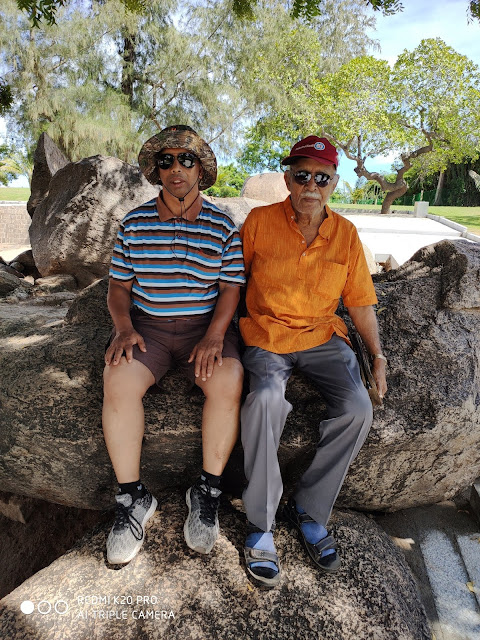 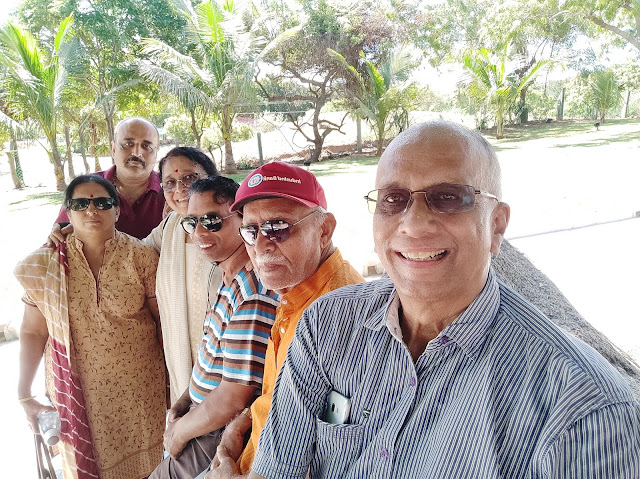 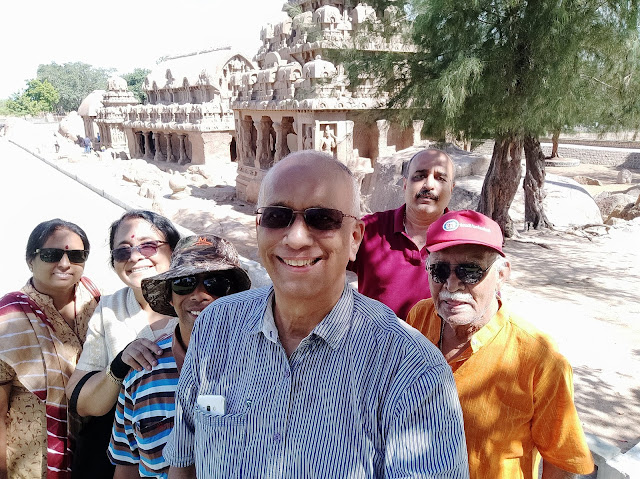 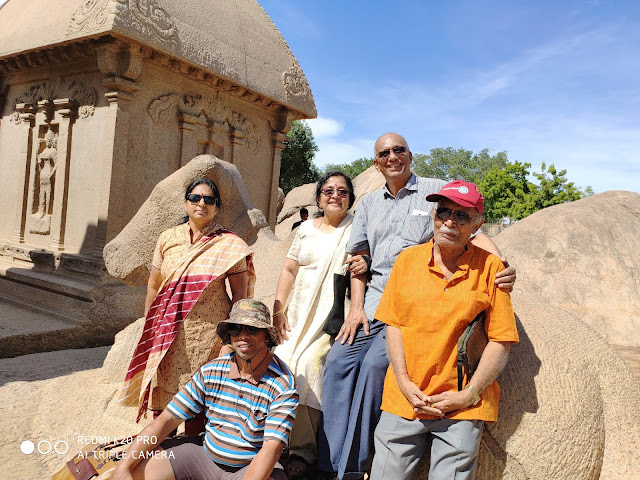 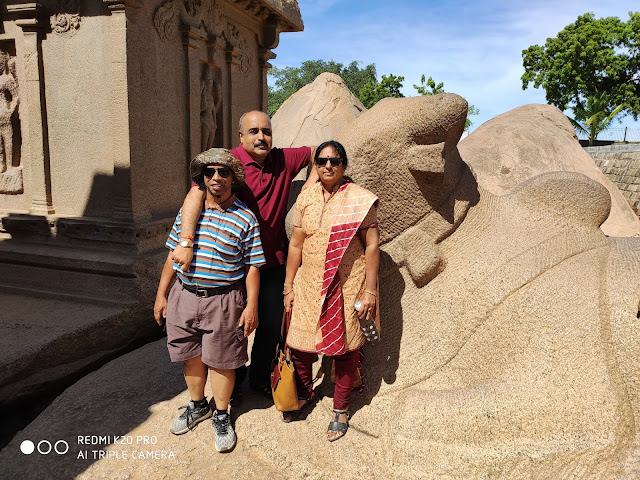 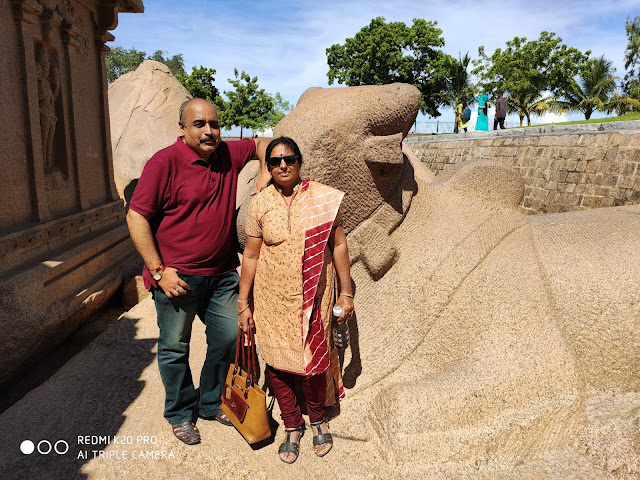 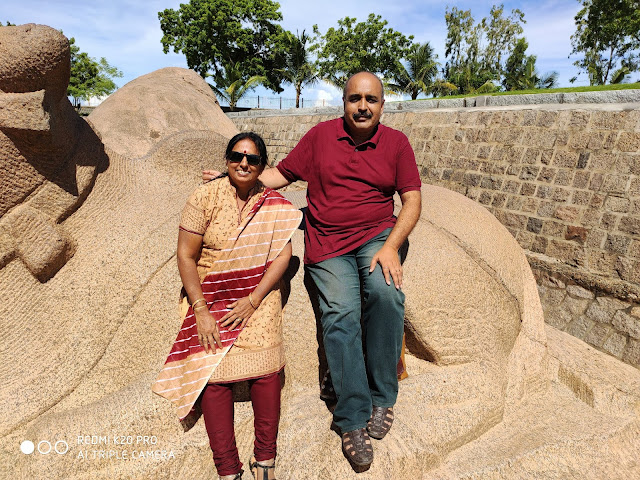 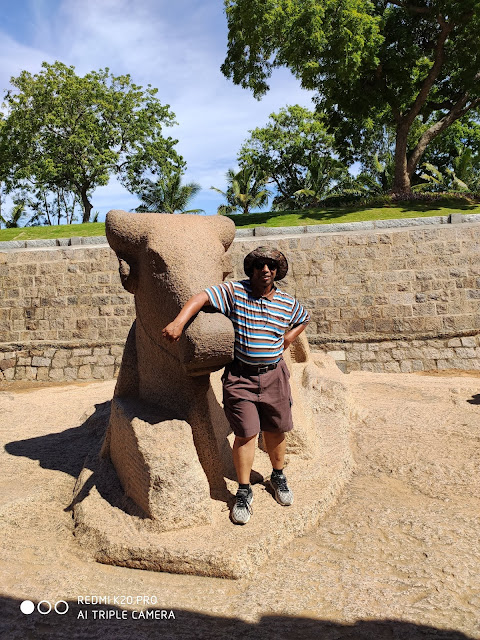 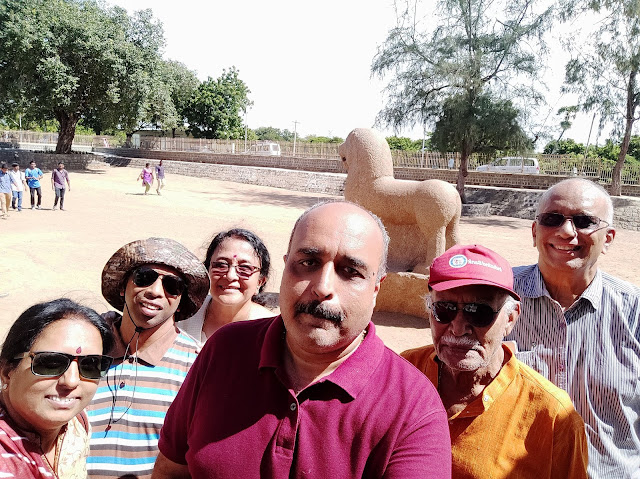 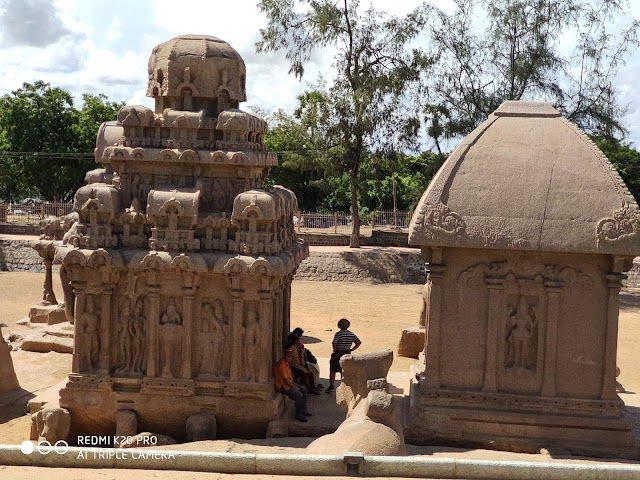 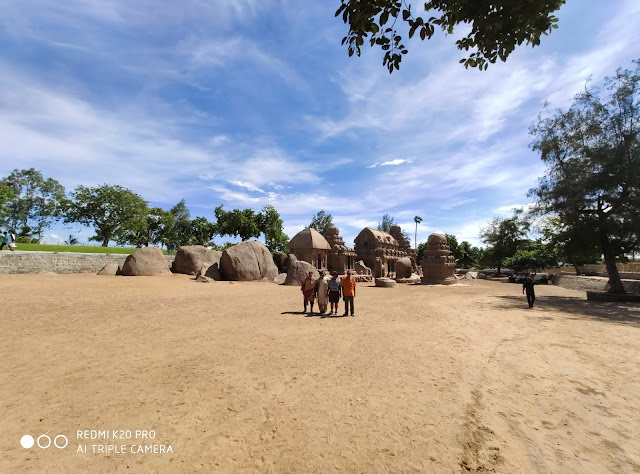 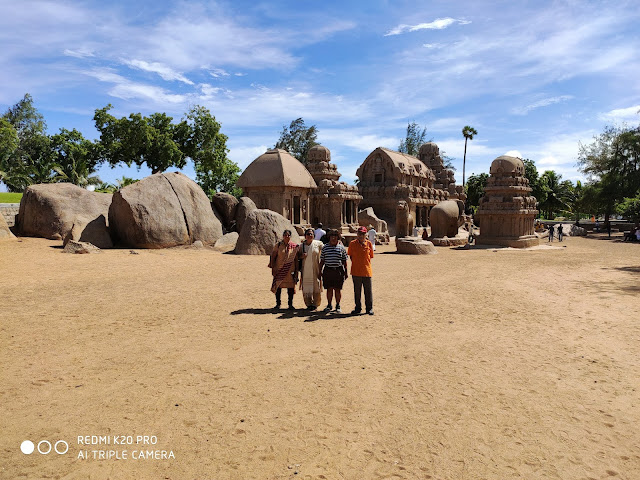 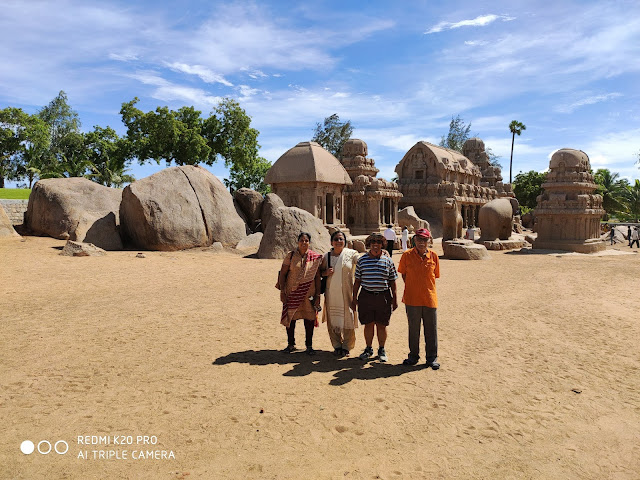 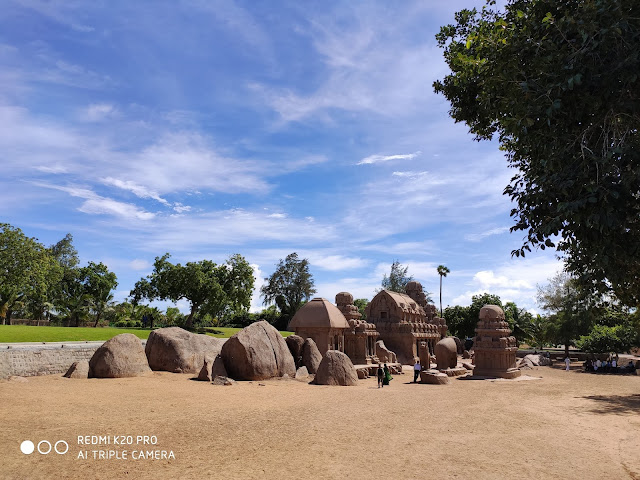