This temple is near Nagercoil in Kanyakumari district. This is amongst the 108 Divya Desams and is the abode of Lord Srinivasa (Utsavar or processional deity) along with his consorts Sridevi and Bhudevi. This temple is between 1000-2000 years old. The Moolavar Thiru Vazh Marban (presiding deity) is a 9 feet tall idol  made of a material called Kadu Sarkarai Yogam, a mixture of stone and lime and coated with a glue made with sugar and mustard. Hence, no abishekam (bathing) is performed to the presiding deity. Photography is prohibited inside the temple hence I could take pictures of the temple chariot and holy tank only. You may note that originally these chariots were drawn by wooden wheels only. Now cast iron wheels with wider wheel base have been added a safety measure for greater stability and to prevent toppling. 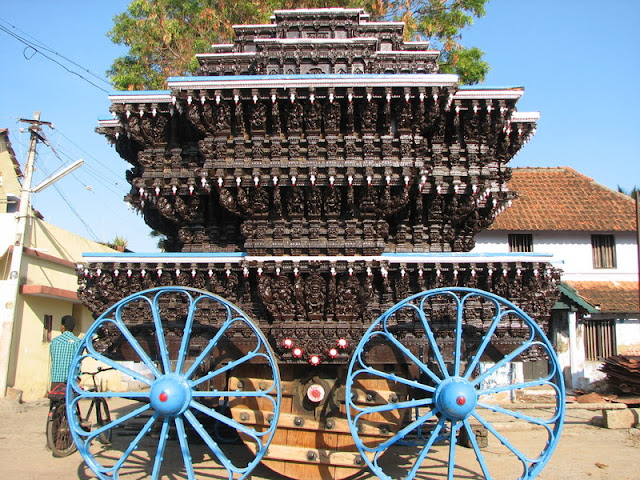 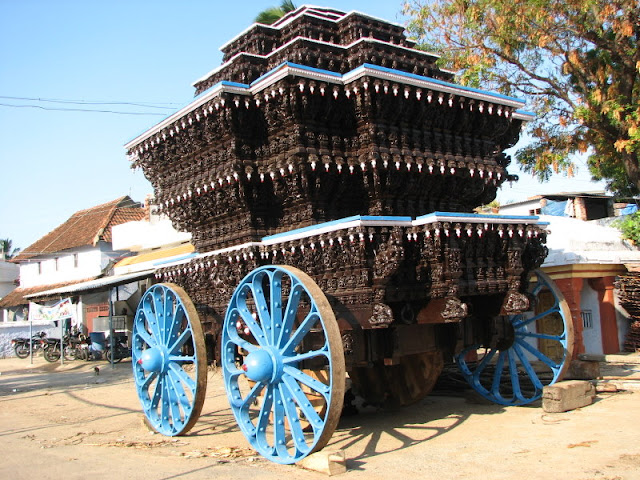 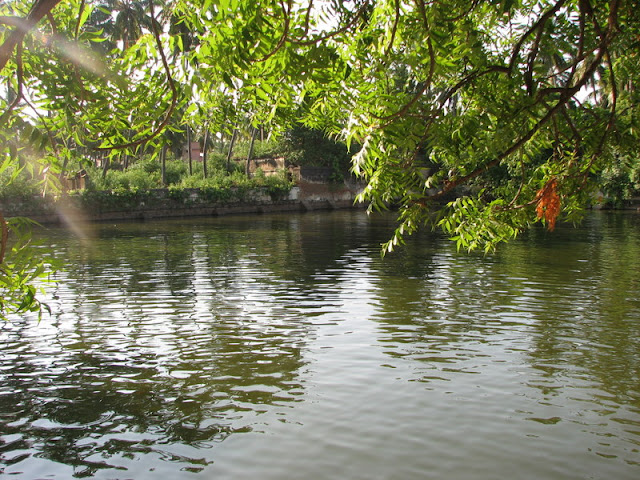 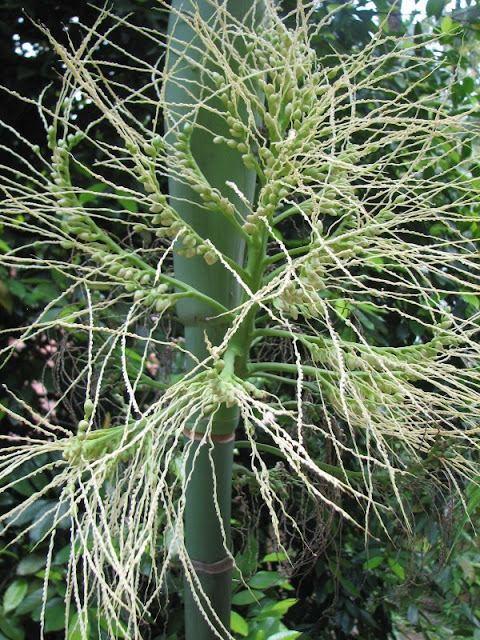 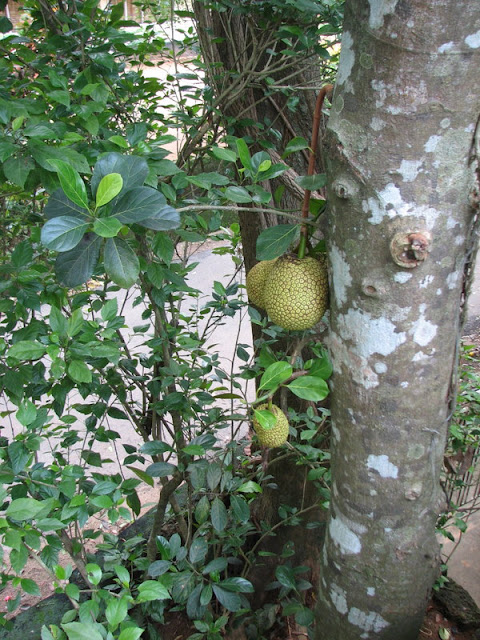 Rajat Gupta-Plummet from the Pinnacle

Erstwhile Managing Director, Mckinsey & Company Rajat Gupta served as Corporate Chairman, Board Director or Strategic Adviser to a variety of large and notable organizations: Goldman Sachs, Proctor & Gamble, American Airlines and also non profit organizations like Gates Foundation, Global Fund & International Chamber of Commerce.Rajat Gupta is additionally the co-founder of  four different organizations: the Indian School of Business (1997), the American Foundation, New Silk Route & Scandent Solutions.
Gupta hails from Kolkata and his parents moved to Delhi when Gupta was five.Gupta's father died when he was sixteen and his mother two years later.He was a product of the Modern school Delhi. Rajat completed his Mechanical Engineering from the prestigious Indian Institute of Technology,Delhi in 1971. He declined a prestigious job offer from ITC Limited and went on to join Harvard Business school from where he received his MBA and was named a Baker Scholar. Gupta joined McKinsey & Company in 1973 as one of the earliest Indian Americans at the consultancy. Elected senior partner in 1984, he became head of the Chicago office in 1990. In 1994 he was elected the firm's first managing director (chief executive) born outside of the US, and re-elected twice in 1997 and 2000. In this capacity, he was considered the first Indian-born CEO of a multinational organization.
Rajat was a founding Board member of the World Economic Forum, a Board member and Executive Committee member of the US-India Business Council, and member of the Advisory Council to the Prime Minister of India.
Gupta was also appointed as special adviser on management reform to UN Secy General Kofi Annan .He additionally served on the UN Commission on the Private Sector and Development and was co-chairman of the United Nations Association of America.
In addition, Gupta was a trustee on the board of the Rockefeller Foundation and was elected in 2009 to the American Academy of Arts and Sciences.(Above information drawn from Wikipedia)
Indicted: Rajat has recently been indicted by a jury in a US Court on charges of insider trading,conspiracy and securities fraud. He can face jail term of up to 20 years. Final judgement will be issued in October 2012.
My thoughts: Rajat Gupta rise has been meteoric and he had become the most successful Indian Americans in US Corporate circles. He had become very powerful and influential was often seen in the company of the rich, powerful and mighty.
Rajat was always a perfectionist. He was methodical and well organized. He was a man of character and impeccable integrity. He richly deserved his success and the accolades and the awards that he received over the years.He was recognized as the Pravasi Indian of the Year some years ago. He also appeared in a "Walk the Talk" show with Sekhar Gupta of the Indian Express in the same year. Rajat has done India and Indians proud both in India and abroad. He was truly a Global Indian.
Gupta's recent fall from grace has been as sudden as his rise has been meteoric. What actually went wrong ? Are the insider trading charges really true? Yes he has been convicted but the evidence is purely circumstantial. But is Gupta really guilty ? Has there been a bias against Gupta due to his stupendous success in America and many forces have joined hands conspired against him ? Was the jury who convicted Gupta totally unbiased? Was Preet Bharara another Indian American and Manhattan U.S Attorney, who tracked Gupta closely with the intent of getting him convicted, jealous of the status, power and influence that Gupta wielded ? Or did Gupta actually commit an indiscreet act in a moment of weakness to help his friend Rajaratnam ? Had Gupta become careless and felt he could get away with such acts and the law could never touch him because of his high connections.?
I am sure that Gupta will appeal to the Supreme Court and a big battle is on the cards. I am sure truth will finally prevail. If Gupta is guilty of fraud he should be convicted. But this should be based on conclusive proof not circumstantial evidence.The selection of jury is also very important.They must  be persons with proven character and integrity. Their decision must be totally unbiased. If not guilty he should walk free. Satyameva Jayate.(Truth alone will prevail!)
Why this post is devoted to Rajat Gupta?
Because I have known him personally for 41 years. I and Rajat were together at IIT Delhi in the same class of Mechanical Engineering for 5 years. Rajat is married to Anita Mattoo another fellow IITian (Electrical Engineering) two years his junior and hailing from Kashmir. Gupta has four wonderful daughters: Geetanjali , Megha, Aditi and Deepali. The Gupta family that I know is a wonderful and warm family and the Rajat that I know is an honest man with impeccable manners and having the highest regard for integrity.My heart goes out to him and his family.
at June 16, 2012 20 comments:

From Kalady , Thottuva is around 12 Kms across on the opposite banks of the Purna River. We have two options of reaching Thottuva from Kalady - drive around via the road bridge over the river or take the direct "thoni" crossing (boat crossing). We preferred the road crossing. My two distant cousins Vasu & Viswam (both brothers) live there - their main occupation is farming. They grow coconuts, pepper & other spices and have rubber and bamboo plantations. Between them they own around 12 acres of land of which around 10 acres is cultivable. The land was purchased by their mother Thangamma from my grandfather K.R.Ganapathy Iyer. (Thangamma & my father were first cousins. Both are no more now). This transaction took place some 50 -60 years or so ago.We visited both families - had breakfast at Vasu's comprising "Gnali Poovan" (small yellow tasty bananas) and "boiled kappai" (tapioca) and this washed down by generous volumes of steaming hot Kapi (coffee). I must have swallowed about a dozen or so of these delicious bananas. At Viswam's house we  had a refreshingly cool coconut water from freshly picked coconuts. Here are some pics taken during this visit: 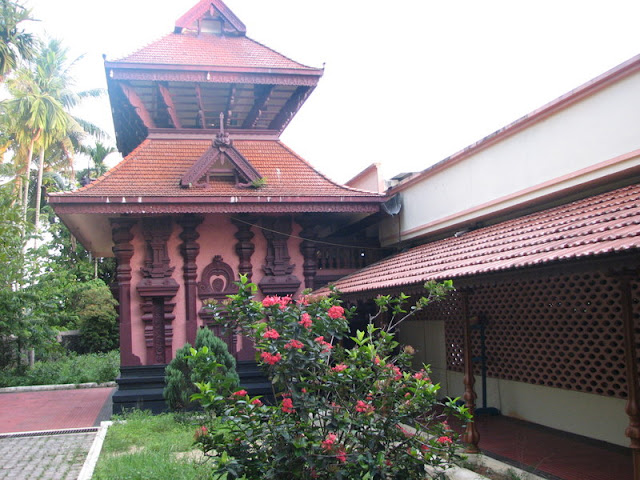 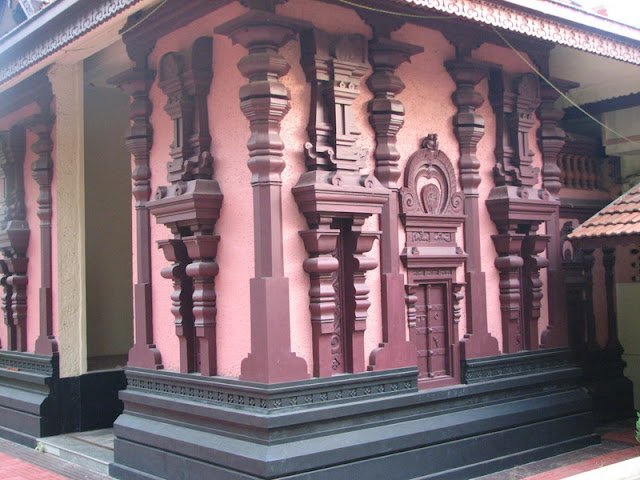