5-3-2008 : (cont'd)
Punnai Nallur : The Maratta rulers used to worship Mariamman. Once a Maratta ruler went to pilgrimage to Samayapuram Mariamman near Thiruchirappalli. After he returned to Thanjavur, Mariamman appeared on his dream and mentioned that She is residing at the Punnai forest 5 km East of Thanjavur. The King went and saw a white-ant hill (Putru) and started building a temple around it. The Maratta rulers Thulaja, Serfoji also worshipped and constructed the temple. The Great saint Sadhasiva Brammendra swamy shaped the ant hill into the form of Mariamman and also installed a powerful Chakra. For more details log on to : http://www.kumbakonam.info/punnai/punnai6.htm
Bangaru Kamakshi : Bangaru Kamakshi Temple is one of the popular religious sites in Thanjavur. The temple enshrines Goddess Kamakshi Amman as the presiding deity.
The idol of Bangaru Kamakshi is made of pure gold- covered with a 'Gold Kavacham' except the face. The ‘Kavacham’, made with Panchaloha, is removed for eleven days in a year for ‘Abishekam’ which is the main festival in the temple. Panchaloha is an alloy of five metals - gold, silver, copper, brass and iron. It is widely used for making idols and statues The face of the goddess is covered with 'punugu', which is black in color and so the idol looks as though made of stone. It is believed that Bangaru Kamakshi came from Kanchi Kamakshi's third eye.
Vadabhatrakali Temple : This one of the several Devasthanams belonging to the Thanjavur Palace. Located at East Gate, Thanjavur. The Goddess is Nisumbasudani. Saivite Bronze of Nisumbasudani is displayed at Chennai Museum. Height 75cm. 10th Centuary AD. The Goddess is destroying the demon Nisumbha. She is represented in an eight-armed figure. The "Image is portraying considerable vigour"- Raudra-cum-Saumya expression. The Devi's left hand is in Kataka mudra, holding the trident. The other hands hold-cobra, sword, shield, bow, bell, dagger and skull cup. The right ear-ring is a human form, while the left ear carries an owl.
at March 22, 2008 3 comments: 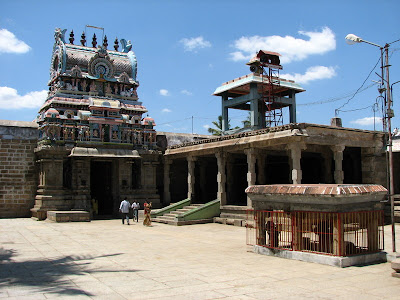 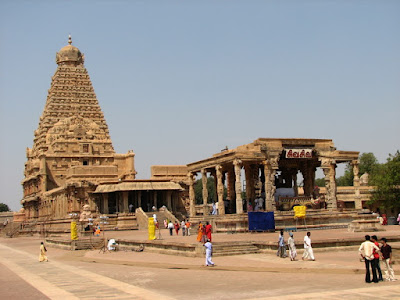 We undertook the our first temple tour to Trichy during January'2008 which has been documented with photographs in my Blog.(See archives Jan'08). We decided to take a second trip this month - 5-9 March'08. This time we travelled to Thanjavur, Tiruvarur,Nagapattinam & Pondicherry Districts which abounds in Tevara Sthalams & Divya Desams. In 5 days of hectic road travel we covered 31 temples & one Church (Velankanni). This included six out of seven Vidanga Sthalams. We halted two nights each at Thanjavur & Tiruvarur. At both places we stayed at the Circuit House where we had made prior reservations through the respective Collectorates.
The primary objective of this trip was to see the Big Temple (Siva) at Thanjavur, Tiruvaiyar Panch Nadeeswarar, Tiruvarur Thiagarajar & then try and see as many temples as possible in the Thanjavur/Tiruvarur belt. The Big temple is undoubtedly one of the most fascinating monuments I have seen & an architectural marvel. Big Temple was holding a dance & music festival for one week starting sivaratri day - reputed dancers like Padma Subramaniam were amongst the performers. Tirunallar Saneeswar was not in our original plan but we made it on the penultimate day. At Tiruvaiyar we went to the Thiagarajar Samadhi and received an unexpected treat - a group of reputed Carnatic musicians (singers, mridangists, flutists) had gathered to sing 'pancharatam' on occasion of Sivaratri.
The travel was overall comfortable - Mornings & evenings were cool but afternoons had become considerably warmer as compared to our January trip.
The most unique feature of this trip was the abundance of large water tanks (tirthams) in all the temples & the innumerable lotus & lily ponds we sighted throughout our journey in Thanjavur & Tiruvarur belt. Incredibly there was a pond at intervals of every 100 meters (no I am not exaggerating). This can probably be entered into the Guinness Book of Records ! And added to that miles & miles of irrigated rice fields - after all Thanjavur was once considered the Rice Bowl of India. Virtually all temples were carrying large quanties of grains received from temple lands - for want of storage space these grains were temporarily stocked in the swami & ambal sannithis
We also stopped by briefly at Mukkombu on the Karur Trichy Route (18 kms before Trichy) - where the mighty Cauvery branches in two - Cauvery & Kollidam (or Coleroon). The Upper Anicut,which facilitates this,was built by Karikala Cholan around 2000 years ago. These two rivers encompass Srirangam turning it into an island before they meet again at Kallanai or Grand Anicut. This is an immensely beautiful place & serves as a sanctuary for a weekend getaway.
We were keen to visit Vedaranyam Wild Life Sanctuary but could not make it due to time constraints. Temple by Temple details will follow in subsequent blogs. Meanwhile readers can view some of the select & fascinating photographs taken during the trip at : http://picasaweb.google.com/ramakrishnan49/ThanjavurTemplesTour
at March 15, 2008 3 comments: