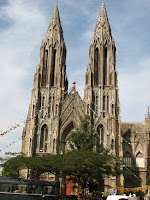 e Thali lunch at Hotel Siddhartha we left Mysore @ 2.30 pm – our destination Srirangapattana about 13 Kms away on the Bangalore Road. Enroute we crossed the magnificent twin spired St.Philomenas Church rising into the sky like the Twin Towers. We filled up gas enroute and reached Srirangapatna in about 30 minutes.The town takes its name from the celebrated Ranganathaswamy temple which dominates the town, making Srirangapattana one of the most important Vaishnavite centers of 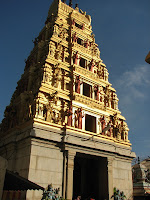 pilgrimage in South India. Srirangapatnam is a river Island – the river Cauvery splits into two & rejoins at Ganjam & thus forms an Island.
We first visited the Nimishamba Temple on the banks of the river Cauvery. The main deity is Nimishamba & other two deities are a Siva Lingam & Lakshmi Narayana. In the outer sanctum you can see Suryanarayana, Pillayara, Anjaneya & Navagraha (on the river bank). A king by name Muktaraja belonging to "suryavamsha" had perf 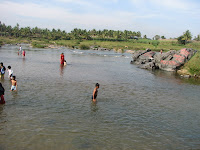 ormed his penance here. Muktaraja had got a carved "shrichakra" on a stone and started performing poojas. It has been kept in front of Nimishamba inside the temple, which we can see even today. There is a belief that Parvathi is going to resolve all problems of her devotees within a ‘nimisha’ or ‘one minute’. The Sangam or confluence of rivers is near the temple & it is considered holy to have a dip there. 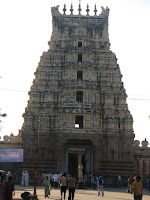 Next we visited Sri Ranganatha Swamy Temple - dedicated to the Hindu God Ranganatha, a manifestation of Vishnu and is one of the Pancharanga Kshetrams or five Ranganathar temples situated on the banks of the Cauvery. Th 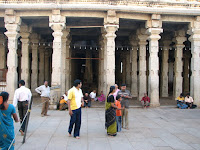 e main deities are Ranganathar, Lakshmi Narasimhar & Mahalakshmi. In the outer sanctum you can worship Garudar & Anjaneya. Here Lord Vishnu is in reclining pose.
Next we proceeded via Pandavpura(5 Kms) towards towards the temple town of Melkote(30 Kms) – it was an off highway road but the road was in good shape & we covered the distance from Pandavapure in 45 minutes. As we approached we could see tha Yoga Narasimhar temple situated majestically on a hill top.Then we entered Melkote which houses an ancient shrine to Vishnu.This shrine is known f 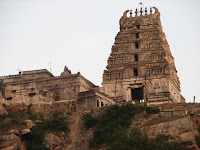 or its long standing association with the spiritual leader Ramanujacharya. Melkote is also known as Yadavagiri, yatistalam, Vedadri and Narayanadri. The presiding deity here (moolavar) is known by the name Cheluvanarayana or Tiru Narayana, while the Utsavar is known as Selva Pillai or Sampath Kumara. There are shrines to Yadugiri Taayaar and Kalyani Nachiyaar. Within the main sanctum are sanctums for Viswaksenar, Ramanujam. Other sanctums for Anjaneya & Mahalakshmi. Outside the Thayar sannithi is a long corridor with exquisitely sculpted pillars.
A crown se 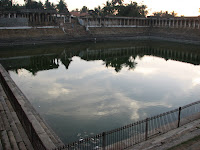 t with precious jewels known as Rajamudi was presented to this temple by Raja Wodeyar (1578-1617) of Mysore. Krishna Raja Wodeyar III (1799-1868) also presented a crown set with precious jewels known as Krishna Raja Mudi.The Vajramudi festival is the chief annual festival here.
The Main temple tank is known by the name Kalyani Kulam – a large ancient beautiful pond with steps & well sculptured mandapams all around. There are two other smaller kulams –known as akka & thangai kulams.
Early in twelfth century, the great Vaishnava saint Sri Ramanujacharya took up his residence and lived here for about 14 years (said so). It thus became a prominent centre of the Srivaishnava sect of Brahmins,
Legend has it tha 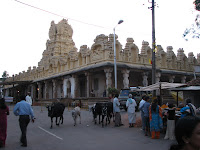 t during the Muslim raids of South India, the Utsava Murthy was stolen and taken away and that Ramanujacharya restored it from the court of the ruler. It is said that it the Muslim princess had grown fond of image of Selvappillai and that being unable to part with it, she followed the Acharya to Melkote and then merged into the shrine there. In honor of this, there is an image of Bibi Nachiyar here at the feet of the moolavar, Thiru Narayanan.The town appears poor and most people living there seem to be associated with the temple in some form or other for their livelihood. People appeared humble & friendly. There was this guy who convinced us to buy his pulihora - we had pulihora for dinner that night and true to his promise it was really good stuff.
We did not visit the Yoga Narasimha temple as it was quite late and it had become dark. Besides with my sensitive back I did not venture to attempt the steep climb up the hillock
at January 05, 2008