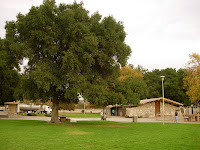 22 Nov'06 :
It was thanksgiving week and Rohit & Bhavana had planned a visit to LA & San Diego. We left for LA by road around 10 am after depositing Pepper(the dog) with Susan a dog sitter at Pacifica. We took LA highway and had a brief stopover at Gilroy for feeding Mira. Gilroy is considered the garlic capital of America ! Shobha & I took the opportunity to visit a huge one dollar store. You get an amazing variety of stuff there & we bought a few things. Then around 12 noon we hit the highway again. We had carried some tasty bites which we kept munching during the drive - ribbon pakoda,cheese biscuits,cookies,chocolatesetc etc. There was a long stretch with no towns of significance in between. We had a lunch stop roughly mid way to LA. It was a nice big place with a picnic atmosphere. A huge parking bay, clean,hygienic & well equipped rest rooms, good lawns & trees, cement tables & benches for dining, separate area for walking your dogs & pets.(If the dogs pooped you had to pick it up & arrange disposal.People with dogs normally carried gloves & plastic bags) Garbage bins were installed at convenient points & female staff employed for frequent garbage clearance. We had our lunch comprising biryani,boiled eggs,butter milk. There were plenty of local birds which would descend and scavenge the left over food. Such a fabulous facility provided by the state and absolutely free.
Our next destination was Solvang also known as the Danish Capital of the America. Solvang is a city in Santa Barbara County,USA. The population was 5,332 at the 2000 census. Quaint Old World architectural styles blend with flower-lined streets to create a walkable village. You see the welcome sight of a windmill as you drive through the small town.You see buildings with thatch, copper or tile roofs; while delightful shops offer imported European wares: porcelain, collectibles, wrought iron and every form of handicraft. The aroma of chocolate, bakeries, coffee and beer garden fare flavor the quaint streets. Comfortable Country Inns, B&B, family motels or full service hotel accommodations are all within walking distance of sights, shopping, restaurants and activities. Solvang was voted one of Sunset Magazine's 10 Most Beautiful Small Towns in the Western United States!
We spent around 90 minutes walking around. We had a taste of delicious & authentic cheese Danish & coffee. It was dark when we left Solvang around 7.00 pm & hit the highway to LA again. We drove along the Pacific Ocean for a considerable distance. We crossed several beach resorts enroute and could see several brightly illuminated ships/yatchts anchored off the b 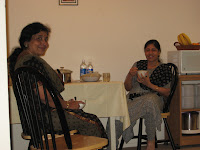 each . Thanksgiving parties aboard ? We reached the suburbs of LA by 8.30 pm but took us more than an hour to reach Orange County. We finally reached the apartment complex where we camped for the night. We were received with great warmth by the the hosts : an Indian Telugu couple(old friends) hailing from Chennai -Viswanath & Geetha. We exchanged pleasantries for a while and this was followed by dinner before we retired for the night. We had had a long and weary journey and fell asleep instantaneously.
The significant feature of the night was the snore-a-thon between Viswanath,Rohit & I. Of varying decibels,wavelengths & frequencies. Rohit and I were completely oblivious of this fact. I think poor Vishwanath did not sleep much that night but was too gracious to admit this. And Geetha too was not spared the earth shaking rumblings in the adjoining room !