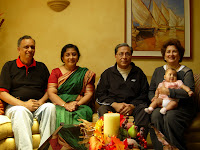 After enjoying some mouth watering chaat at Chaat Paradise in Sunnyvale, Shobha& I (duly chauffered by Rohit & navigated by Bhavana & Baby Mira in tow) drove into Meranis sprawling Ranch at Las Gatos on 18th at 2.58 pm.(Los Gatos is an hours 90 minutes drive from Daly City) Merani was waiting eagerly at the door to receive his Mech'71 buddy after 35 years perhaps a little apprehensive as to whether he would be able to recognise me or not.

But recognition was instantaneous and the joy unbounded. He rushed out to greet us & shepherded us all graciously into his drawing room. Susan soon made her appearance and after the initial round of introductions we settled down comfortably for a long chat.As Merani & I were deeply engrossed in our own conversation about life at IIT & thereafter,blissfully oblivious of all else present, Shobha & Sudha took the opportunity to know each other better. It turned out that Susan had her schooling at Church Park,Chennai(same school that Madam Jayamma also attended). Susan also narrated some interesting experiences with some of the Mech'71ers whom she had an opportunity to meet during their visit to Dilli in Dec' 2000 -the confidential & classified details are being with held.

Merani & Susan turned out to be fantasic hosts. After a session of digital photography Susan led us into the dining room for High Tea - mountains of sandwiches, varieties of cakes & cookies, samoosas & what not.What a veritable feast ! Had we known about the generous spread in advance we might have decided to give a skip to the chaat paradise.
The Meranis have two children - son works in San Fransisco & daughter is doing her undergrad.

Merani it turned out has a passion for gardening.He took us on a tour of his lawn & garden - showed us his special oak tree which he reported as the tallest on his street,the tulip tree which flowered in winter and his fish pond which had some exotic & very colourful varieties of fish.
Soon it was time to bid adieu-all good things have to come to an end ! And we departed carrying pleasant memories with us.
From Las Gatos to Saratego a 20 minute drive where Lakshmi & Ranjit live with their two daughters - Nalini & Mallika. Ranjit runs his own company in silicon valley while Lakshmi teaches in a nearby school.(Lakshmi is moorthy mama's daughter) We had yet another High Tea with several delicious eats followed by invigorating South American coffee.They have a swimming pool & a nice lawn where they hold their outdoor parties. Mallika in High school while Nalini goes to undergrad school at Berekeley.
We returned to Daly City via the Indian Store (Coconut Hill) in Sunnyvale where we picked up the weeks provisions -ranging from vegetables to masalas to appalam/vadam rice, dal,oil & a variety of powders. The store is frequented only by Indians ! And Sunnyvale has a large resident Indian population and there are several Indian restaurants to provide variety to the taste buds - South Indian,North Indian,Punjabi etc.
at December 30, 2006