18-9-2011: I have never visited Rameswaram and have pondering over this for several months now - but always postponed travel owing to lack of a convenient transport from Coimbatore to Rameswaram. My prayers were answered when the Railways suddenly introduced a direct overnight train on this route couple of months ago. So we hastily planned and booked our tickets and took the train leaving Cbe on 17th night. The train stopped briefly at Mandapam then crossed over the Pamban Bridge built over the Bay of Bengal. This is the 2nd longest sea bridge in India at a length of 2.3 Kms (after Bandra Worli sea link). We reached Rameswaram early on 18th around 7.00 am took a ricksaw and checked into a decent hotel room located near the temple.
The temple island of Rameswaram has acquired this name because Lord Rama worshipped Lord Shiva here on return from Sri Lanka. According to legend, after killing Ravana, Rama returned with his consort Seetha to India first stepping on the shores of Rameswaram. To expiate the `Brahmahathi Dosha' of killing a brahmin 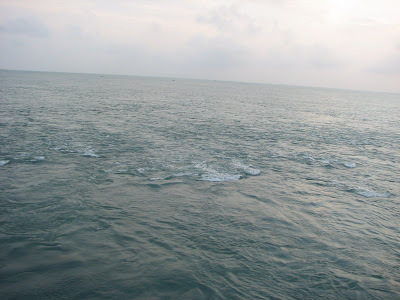 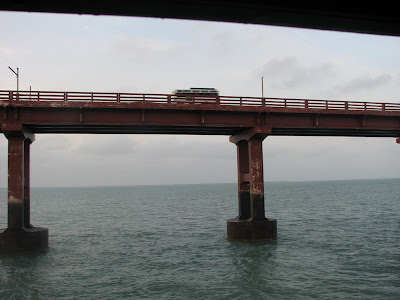 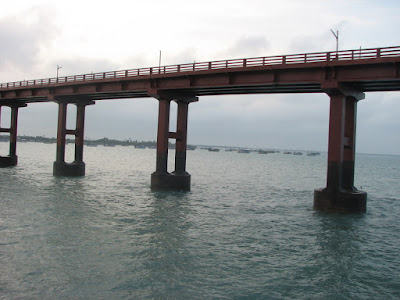 Lord Rama wanted to offer worship to Lord Shiva. Since there was no shrine on the island he had dispatched Sri Hanuman to Benares to bring an image of Viswanathar. Anticipating delay in Hanuman's return Rama offered worship to a Shiva lingam fashioned out of sand by Sita. This lingam is called Ramalingam and thus the place got the name of Rameswaram. The temple is one of the holiest Hindu Char Dham shrines that has to be visited in one's lifetime and is one of the twelve Jyotirlingas, the holy abodes of Lord Shiva.
As per tradition we first went and had a dip in the ocean located on the East side of the temple. The water was cool and refreshing and the dip was energizing.
See above & below photos of Pamban Bridge & sea dip:
1:View of Bay of Bengal
2&3: Pamban Road Bridge as seen from the train
4-6:Devotees having dip in the Bay of Bengal at the special bathing ghat
7&8:View of East side Vimanam as you enter after dip in the sea ......................to be continued 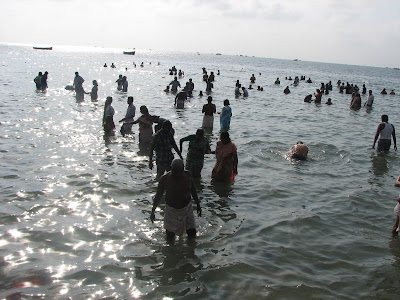 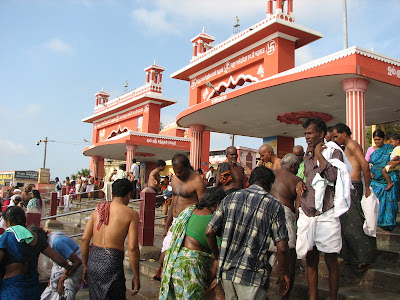 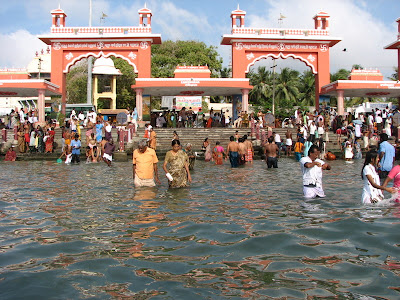 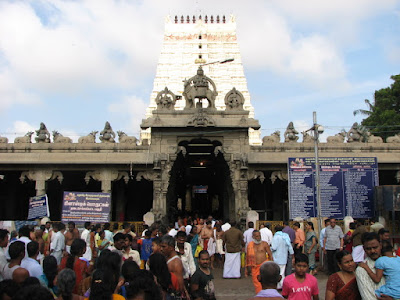 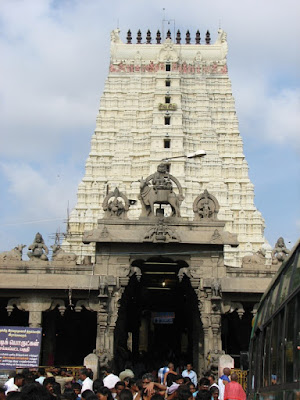