Origin of Akasha Ganga: A great Vaishnava Saint Peria Tirumalai Nambi (973 AD) was performing services to Lord Venkateswara by bringing water from Papavinasam Falls for the daily morning puja of the Lord. Even during his advanced age the Saint was performing this service.The Lord took mercy on him and appeared in the form of a fowler and stood before him begging him for water to quench his thirst.The Saint refused to give him the water as the water was required to be offered to the Lords feet during puja.The fowler shot an arrow at the pot making a hole and drank the water.Tirumalai Nambi felt sad at this act of the fowler and started going back to Papavinasanam for bringing water.The fowler told him not to worry and immediately shot an arrow at a spot in the Anjanadri hills and sacred water gushed out.The fowler then appeared to the Saint as Lord Venkateswara and told him to draw water hereafter from this new water fall which is much nearer to the temple and named it Akasha Ganga. 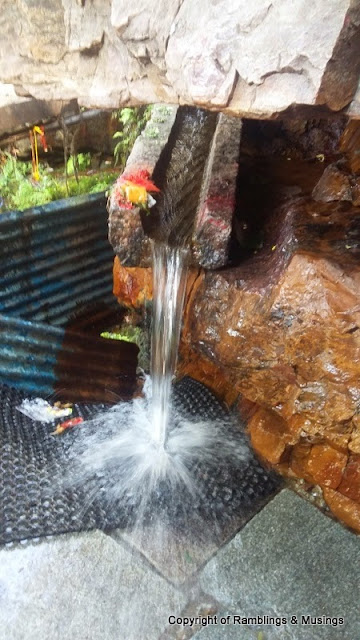